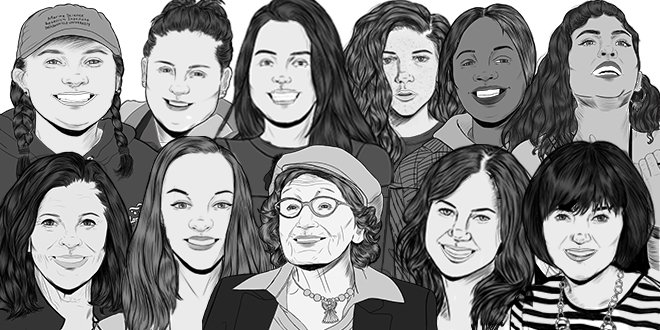 Year of the Woman Retrospective: Commemorating Visionary Women at JU

WAVE magazine reflects on members of the JU community who have demonstrated this year’s Women’s History Month national theme: “Visionary Women: Champions of Peace and Nonviolence.” These JU Dolphins dared to be bold, to lead, and to embrace the unexpected.

We should all aspire to inspire the way Fran does, to live her legacy. I have seen plenty in 32 years of business, and she has witnessed much over her decades in higher education. We are both intrigued and energized by the human spirit and share stories with each other constantly.

Kinesiology freshman Kanttida Charlotte Rose heads to The World Cup in Miami at the end of this month. Though the international regatta is not her first or an Olympic qualifier, it still affects her rankings worldwide. As Charlotte’s fourth time sailing it, she aims for a new personal best and to represent Jacksonville University with excellence.

JU Dolphin in the Land of Bluenoses: Reliving Nova Scotia

Christina LoBuglio, Graduate Assistant at the Jacksonville University Marine Science Research Institute joined OCEARCH for its 33rd expedition, a first in Nova Scotia for her and the entire team. With the exception of their Gulf Stream 2018 exploration, she’s been involved in every OCEARCH expedition for the past 30 months.

Isabella Martinez, a junior musical theatre student at Jacksonville University, has been on the stage her entire life. Isabella takes the stage not only at JU, but at local community theatres, including The 5 and Dime, Players By The Sea, All Beaches Experimental Theatre or ABET, Theatre Jacksonville, and Phase 8 Theater Company.

Jacksonville University’s Alia Simon Montijo, a Chicago-based entrepreneur, pursuing her Master of Fine Arts in Choreography, is one of only 10 Florida students to receive an American Association of University Women grant. This supports her participation in JU’s low-residency MFA-Choreography program more than a thousand miles from her home and studio.

Selected as one out of eight recipients of the Guy Harvey Ocean Foundation Scholarship, Macek now works for the St. Johns Riverkeeper in an office located inside MSRI. She is also doing a deep dive into her graduate research and exploring how anatomical changes in commercially available circle hooks affect sharks.

At the age of 99, Atlanta-born Major Helen I. Glenn passed from this life, leaving behind an incredible legacy which includes her time as Jacksonville University Assistant Dean of Women and later as Director of Financial Aids.

Through Hannah’s Eyes: JU Behind the Camera

Accustomed to being a one-woman film crew, she said that joining the Film program at JU opened her eyes to what it’s like working on a set with a team. As she looks forward to two more years at JU, she is as hopeful as she is grateful.

On Fri., Dec. 7, Jacksonville University announced the naming of the Linda Berry Stein College of Fine Arts in recognition of a multi-year, multi-million-dollar gift, among the largest investments in the University’s 84-year history, from alumnus Linda Berry Stein ’69 and her husband, David Stein.

The 2018 42nd Annual Air Race Classic, today’s descendant of the Powder Puff Derby, has been a Jacksonville University tradition since 2010.JU’s School of Aviation has a storied ARC history, with JU alumni Leah Hetzel and Sarah Morris finishing first place in 2011, bringing home the Collegiate Challenge Trophy. This year’s competitors, Rachel Chaput and Madison Bright, set out together to recapture the trophy for JU.

To further honor her memory and her life’s work in nursing education, the Bloom family established The Stephanie Bloom Memorial Scholarship Fund. Through these gifts, students are directly supported with scholarships to pursue Nursing, a field that ranks No. 4 for the highest-demand employment in Florida.