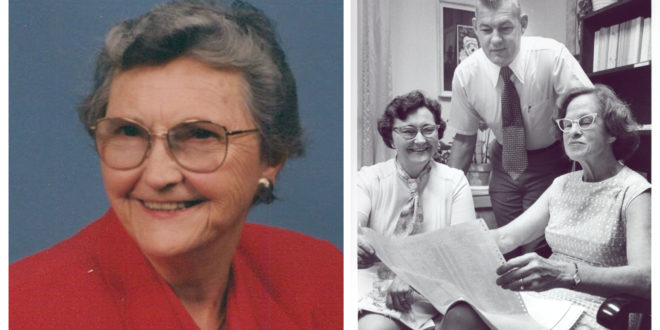 At the age of 99, Atlanta-born Major Helen I. Glenn passed from this life, leaving behind an incredible legacy which includes her time as Jacksonville University (JU) Assistant Dean of Women and later as Director of Financial Aids.

“I find one of the most satisfying aspects of my work is being in a position to counsel the young.”

A 1970’s JU Navigator summertime entry reports Glenn receiving a “Trident Tribute” which read in part: “In recognition of her outstanding work with young people, encouraging patriotism and interest in our American heritage, Miss Glenn received a certificate from the Daughters of Colonial Wars at a meeting in Atlanta on Monday… To be recognized for her interest in youth is appropriate for Helen. ‘As director of financial aids at JU, I find one of the most satisfying aspects of my work is being in a position to counsel the young,’ she says.”

Glenn’s Trident Tribute, says retired JU Professor of Education Margaret Janz, was most likely crafted by Martha McGee, then-Dean of Women and Glenn’s direct supervisor. This recognition was only one of many accolades received over her lifetime, including the military cross for honorable military service during World War II, for serving four years in the Women’s Army Corps, both as an intelligence officer and battalion commander, attaining the rank of major. She commanded the first all-female Women’s Army Corps (WAC) battalion, serving in London, Paris, and Belgium, and working with American prisoners of war who communicated through the Red Cross to pass intelligence information which was then decoded by her unit.

From riding an Indian four-stroke motorcycle at the age of 15 to smuggling a dog named Sgt. Butch out of Brussels, Glenn led an adventurous life in service to country, kin, higher education, and womankind. She survived the Blitzkrieg along with fellow intelligence officers and British Allied servicemen. When telling of her experience in the European theater, she once said, “I had a strong sense of patriotism, and I knew I could be helpful. There was no reason why I shouldn’t serve my country.” And her time working in American Intelligence did not go without its shining moments, including the Thanksgiving spent overseas when she accepted an invitation to dinner from King George VI and Queen Elizabeth.

With this storied background, she returned stateside and earned both a Bachelor of Arts degree from Mercer University and a master’s degree in journalism from Indiana University, at a time when women rarely pursued higher degrees or the then-controversial field, for a woman, of journalism. A dedicated alumna of the Alpha Delta Pi (ADPi) sorority, she served as international secretary-treasurer and director of the executive office for nine years, which included fulfilling duties in Berkeley, California; Kansas City, Missouri; and Atlanta, Georgia. She and her father were also instrumental in helping establish the memorial headquarters of the all-women organization in Atlanta, handpicking the historic, three-story home on Ponce de Leon. Last September, Glenn celebrated her 75th year of membership in ADPi.

Along the way, she added director of public relations and associate professor of journalism at Brenau University and Wesleyan College to her resume, and just prior to arriving on the Jacksonville University campus, she was made Dean of Women at Mercer University.

Recruited by Dr. Robert Spiro, then-president of JU, Glenn moved to Jacksonville to become Assistant Dean of Women and later held several administrative titles. After joining the JU administration in 1971, she also served as a member of the faculty and as an advisor to both The Navigator and The Riparian.

Thomas H. Gunn, library director at Jacksonville University for thirty years, said, “I found her to be a delightful person to work with, especially in raising funds through the activities of the Friends of the JU Library. Even after she retired and moved back to Georgia, she wrote and called about library issues, and became involved with her local public library. She had a warm personality, a great sense of humor, a friendly disposition, and an eagerness to help others—qualities that endeared her to all who had the opportunity and the pleasure of knowing and working with her.”

Janz worked at JU during the same timeframe as Glenn, and she recalls that, on numerous occasions, upon wrapping up her own late-night reading courses, Glenn’s car was still parked in the lot. “I was there two or three nights a week until nine or later, and it was very seldom that I would walk to my car and not see the light on in Helen’s office. She probably worked more hours for JU than just about anybody else.”

Mrs. Jeanine S. Garrett, now director of Wilma’s Little People School on campus, was a recipient of Glenn’s advocacy of those in need of scholarships or other financial guidance. She says, “I was a Junior at JU when suddenly my father lost his job. My mother contacted Financial Aid to see if there would be a way that our family could get some help so that I could continue my studies. Helen Glenn went right to work and found a scholarship for me from the Rotary Club. It was to be paid back once I graduated. She also placed me in a student employment position at Wilma’s Little People’s School. After I graduated, my mother checked with her on the specifics of making the payments for the scholarship. One day, Ms. Glenn called her and said the scholarship had been forgiven and no more payments were necessary. It was a huge blessing to my family.  I was fortunate to continue a relationship with her throughout my life. She became a longtime mentor and friend.”

Glenn’s family confirms that she did that often. Janz says that despite her generosity, or perhaps because of it, Glenn held students to high standards, particularly those who were also members of ADPi.

“She wasn’t the easiest professor. She expected students to make good grades and study. If someone had written a paper, they quickly learned not to bring it to Helen unedited. She was a perfectionist when it came to writing, probably because of her journalism background. She would go over and over those papers. Helen wrote beautifully.”

Jacksonville University counts Glenn as one very special link in a long-held connection to the brave men and women of the U.S. military—those who have served, those who continue to serve, and those who have answered the call to serve, including those members of the JU military family—active-duty students, veterans, and the JU Naval Reserve Officers Training Corps (NROTC).

A 70-year member of the American Legion, it is important to note that Glenn was employed at JU the same year its NROTC unit was established, when the strong bond that exists today between the University and Jacksonville’s military community first began. Today, the JU NROTC unit is one of the finest in the nation and has produced more than 1,700 ensigns and second lieutenants for duty as officers in the United States military.

Today, JU employs more than 50 veterans and retired military on campus, a tradition that did not begin with Major Glenn, but one of which she remains a significant part, with the entire Jacksonville University military community (active duty students; student veterans; Navy ROTC midshipmen; military family members utilizing the GI Bill; faculty veterans; staff veterans) nearing 600.

For more information regarding funeral arrangements, or to contact the family of Major Glenn, visit Tom M. Wages Funeral Service.  For more details about Jacksonville University’s veteran and military programs and offerings, or about JU as a 100% Yellow Ribbon school, visit us online.