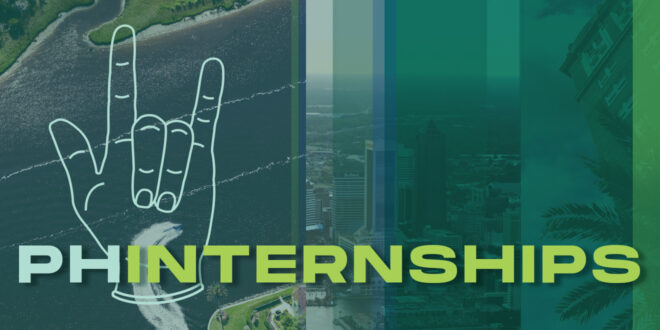 This summer, Jacksonville University is featuring students at their internships across the city and beyond. First up is Abigail Myrie ’22, who just completed her internship with Operation New Hope. If you or a student you know is interning this summer or recently interned somewhere, contact the Office of Marketing and Communications to be featured.

For those living in poverty—without transportation, employment, or support— “hope” can be difficult to define, let alone have.

Operation New Hope is an organization that actively supports people who are experiencing homelessness and addiction with histories of crime—and connects them to resources and career opportunities in Florida. Founded in 1999, Operation New Hope has spent over 20 years advocating for disenfranchised communities, gaining bipartisan and national attention from the past four White House Administrations.

The organization has two locations: one on North Main Street in Jacksonville, Florida, and the other on West King Street in St. Augustine, Florida. This is where you will find Jacksonville University’s interns.

She is pursuing a legal career as a practicing lawyer in both prosecution and defense, preparing her for her dream goal of becoming a judge. Myrie graduated in Spring 2022 with a major in Psychology and a minor in Criminal Justice. She is also a member of the Rho Omega Chapter of the Delta Sigma Theta Sorority Inc., which is an organization committed to sisterhood, scholarship, service, and social action. Sociologist and criminal justice expert Professor Shelley Grant connected Myrie to the internship at Operation New Hope.

“I suggested to Abby that she should contact this organization based on her interests and because of the great work they do in the area of reentry for individuals post-incarceration.”

Myrie is the first to serve at Operation New Hope. Prof. Grant said she’d like to connect more students to this organization.

“I have worked in a few capacities with Operation New Hope’s leadership on the State Attorney’s Juvenile Justice Advisory Committee, the City Council’s Safety and Crime Reduction Commission, and as the Master of Ceremony for the Women and Re-Entry event,” she said. “They are very involved. All of my interactions with this organization have been positive and I was so excited for Abby to have this opportunity.”

“Involved” is the word.

Operation New Hope has shaped local, state, and federal policy since its inception. President George Bush selected the organization as the pilot site for Ready4Work – a reentry program that trains and prepares people who are returning from incarceration for employment. Perhaps its greatest work is the federal First Step Act, a bipartisan criminal justice bill that aims to reform federal prisons and sentencing laws and reduce recidivism overall. This collaboration later prompted the Florida First Step Act, and other states followed.

In Jacksonville, Operation New Hope partnered with the Jax Chamber in their Ban-the-Box initiative, which encourages employers to delay criminal background inquiries during the interview process. Other cities around the nation are implementing more equal hiring practices due to this movement. Jacksonville was one of the first chambers to do it.

“We have witnessed many clients who have successfully transitioned to become contributing members of society. Some clients have gone on to entrepreneurship and have given their testimonies of success, and we are privileged to be a part of their journey. Abby was able to be part of that difference,” says Cindy Phengphanh, Case Manager Supervisor at Operation New Hope.

Myrie served in intake for the organization every day for three months and found the work to be rewarding. She was able to meet and help an average of 10 people a day, where she would inform them about the programs and its advantages: transitional housing options, weekly stipends, and employment training.

“Abby stepped right in, absorbed information, was flexible, cooperative, and gained as much knowledge in the organization as she could. We appreciated all of her contributions and willingness to assist in whatever was needed,” says Phengphanh.

Myrie shared that this internship opened her eyes to the growing needs of the community, especially for those who are other-abled. According to the United States Interagency Council on Homelessness, nearly one-quarter of individuals who experience homelessness also have a disability, including physical, intellectual, and developmental disabilities. These people also experience discrimination regarding housing, healthcare, and employment. Myrie hopes that this will be an area that Operation New Hope will be able to address in the coming years.

“In the field of criminal justice, it is so important to have compassion and empathy,” she said. “We all have a past. We all have baggage, biases, and personal challenges, and understanding that goes a long way.”

Abby added, “Operation New Hope’s vision is to build a stronger community through creating second chances and reducing recidivism. This experience has certainly guided me in my career pursuits and showed me the other side of the criminal justice system.”