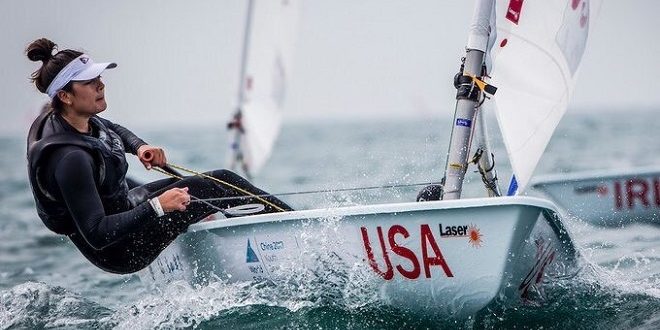 Racing a sailboat is equal parts art – feeling the movement of the boat, sensing the optimal time to change course – and science, calculating ever-changing wind speeds and water currents.

Freshman kinesiology major Charlotte Rose is both an artist and a scientist at the highest levels of collegiate sailing and beyond. A two-time youth world champion, Charlotte heads to World Sailing’s World Cup Regatta in Miami this week. The outcome of this prestigious race, full of Olympic team hopefuls, will affect Charlotte’s worldwide rankings. In her fourth time sailing it, she aims for a new personal best and to represent Jacksonville University with excellence. 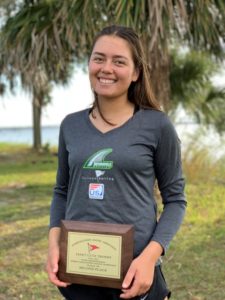 Born in Thailand, Charlotte has lived in the U.S. since age three. Her hometown is Houston, Texas, a 17-hour drive from Jacksonville. She was recruited by JU Head Sailing Coach Jon Faudree to join the five-year-old team that had already stacked up a series of team and individual wins and catapulted itself into the college sailing national rankings. Charlotte says the warm weather, great sailing team, and affordability drew her to JU. Coming from a smaller high school class, Charlotte says that she loves the professor-to-student ratio JU offers. “Just being on campus, I felt so welcome.”

She says that sailing on the St. Johns River is similar to her experiences sailing on Galveston Bay in Houston. Charlotte feels she has found her home away from home and envisions herself staying in Florida after graduation. “I really love it here. The beach is much closer here than at home. I live on the west side of Houston, so it takes about an hour to get to the water.”

Charlotte came to sailing relatively late compared to others in the sport. At age nine, she first attended a beginner’s sailing camp at the Houston Yacht Club. Her first memories of sailing are fond ones: “The boat we used then was an Opti. Basically a bathtub with a sail, and the first time we went out, I hit my head on the boom. But I never gave up.”

Since age 12, Charlotte has sailed the Laser Olympic class sailboat. She has competed in many regattas under the Texas Sailing Association and the Gulf Coast Youth Sailing Association, on range of waterways in Austin, San Antonio, Dallas, Corpus Christi, and Houston.

“My dad pushed me on the harder days when I didn’t want to get out of bed and go sailing. My parents were always there to support me.” She also credits her mentor and former coach Rosie Chapman. “She talked me through those times I wanted to give up.”

Charlotte’s first national event was in 2012. “I didn’t do very well,” she says with a wry smile, “and placed 75th out of 100 boats.” But her natural talent and work ethic quickly catapulted her to the number one ranking in her age group – first in the country, and then in the world. She made her international debut in Germany in 2015 and has competed in Canada, Mexico, the Netherlands, and China. Today, she competes within her age group and in open races against men and women of all ages. 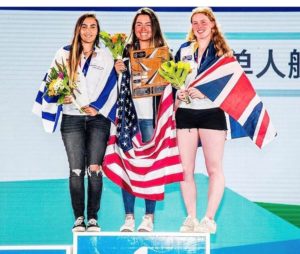 Charlotte’s racing record is full of big wins and triumphing over significant adversity. She represented the U.S. at the 2017 Youth World Championships in Sanya, China. Her battle for the world’s number one spot came down to the 10th and final race against the 2016 champion from Uruguay. “I remember being so tired those weeks leading up to Youth World Championship, with classes during the week, swimming lessons every day, and sailing all weekend.” It wasn’t until she crossed the finish line and saw the media boat cheering that she realized that she’d won.

So, in 2018, Charlotte had a taste for the win and was determined to repeat her success. It had been a decade since there had been a consecutive Youth World Champion. She headed to her home state of Texas to compete once again against the world’s best. “Corpus Christi is one of the windiest places to sail,” she says, “and it’s brutally hot. For five days straight, it blew 12 to 18 knots per day.”

High winds. Two races per day. The best youth sailors in the world. On the fourth day, Charlotte discovered at the start line that the ratchet on her mainsheet sail – a critical part that controls the boat’s sail – was malfunctioning. “I didn’t have enough to time to change it out. It was a 45-minute race and so hard. My hands blistered and I really don’t know how I did it.” Even with the critical part broken, she went on to win both her final races and claim her second consecutive world championship.

This past September, now competing for JU, Charlotte won the SAISA Conference Championships against the College of Charleston, the first time a JU sailor has won a conference championship. She qualified for the College Single-Handed Nationals, becoming one of 18 sailors from colleges across the U.S. to compete in November in Holland, Michigan.

The week of the national championship regatta, there was a chance she might not be able to compete at all. “I woke up earlier in the week so nauseated, thinking I had food poisoning. So, I tried to eat and go to class, but ended up telling my professor that I needed to go to the hospital.” After a four-hour ER visit with IV fluids, tests, and medication, Charlotte was limited to a liquid diet. It wasn’t until the day of the national championship that she could once again eat solid food. She powered through eight cold, windy and wavy races on day one and was in fifth place overall. Day two brought winds gusting over 20 knots with flat water – and still she dominated the fleet, winning or finishing second in the final six races. Ultimately, Charlotte came within one point of winning the national championship as a freshman. 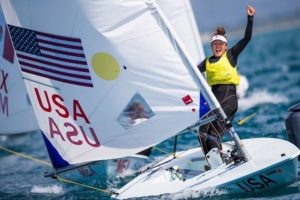 Tacking Toward the Future

Charlotte is passionate about sailing and plans to one day become a dietician for professional athletes. Building on her success at both the youth and collegiate levels, she also plans to campaign for the Paris Olympics in 2024 once she graduates from JU. “Full-time campaigning is pretty much a career. My projected graduation date is 2022 and the Olympics are in 2024, so it’s perfect timing.”