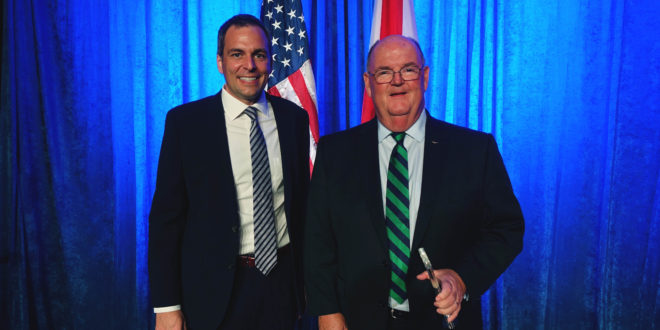 Those close to School of Aviation Director Capt. Matt Tuohy (Ret) ’75 ’03 are accustomed to it. Those who meet him for the first time quickly grasp it: His primary mission is always about what he can do for others. How he can make their task and life just a little easier. How he can help them succeed.

He’s been recognized numerous times for those distinguishing traits, and many more, including most recently as the fourth annual Rear Adm. Kevin F. Delaney Hall of Fame Award winner, given this past fall at the JAX Chamber’s 15th Annual Military Appreciation Luncheon before a crowd of more than 800.

“Matt’s impeccable record of military leadership and his service to local veterans organizations have left a lasting impact on our community,” Heavener said. “He is a perfect example of service to country, state and city.”

Tuohy made clear just how important “paying it forward” is to him in a Wave Online “Heroes” profile several years ago.

“I get angry when people say that today’s generation isn’t as good as we were,” he said. “Yes they are, in every way! These are the people who are now our JU student veterans and moving to the next chapter in their lives.”

“He has followed a distinguished naval career with one filled with a life of service to multiple military and community organizations,” Fleming said. “Matt represents the embodiment of pride and professionalism. Jacksonville University is proud to support our nation’s military, and we are fortunate to have Matt serve as one our most prominent community leaders.”

A member of the first class of the JU NROTC, Tuohy graduated from the University with a BS in political science in 1975. He also earned an MBA from the JU Davis College of Business in 2003, holds a Master of Arts in International Affairs from Salve Regina College and a Master of Arts in National Security and Strategic Studies from the U.S. Naval War College.

Throughout an almost 27-year career as a Naval Flight Officer, he flew the S3A and S3B Viking. He was the Commanding Officer of Sea Control Squadron 32 (VS-32), the helicopter carrier USS INCHON (MCS-12), and finally the aircraft carrier USS KITTY HAWK (CV 63), as part of the Forward Deployed Naval Forces, home-ported in Yokosuka, Japan. Ashore, he served on the Joint Staff in Washington, D.C., as the Assistant Deputy Director for Operations (Information Operations).

Since retiring from active duty, Tuohy has served as JU Director of Aeronautics (2001-04); as Staff Business System Analyst for Dynamics Research Corp.; Executive Vice President of Wind Energy Consulting and Contracting; Executive Vice President of East Coast Ice; and Managed Solutions Director at Incepture, a subsidiary of Florida Blue. While at Incepture, he founded the Incepture Veterans Employment Taskforce (InVET), which was nationally recognized with the American Staffing Association’s “CARE” Award in 2013.

In October 2014, he was appointed to another pivotal leadership position at Jacksonville University, as Director of the School of Aviation in the Davis College of Business.

He is also extremely engaged in community service, including leadership in many organizations, such as President and now continuing board member for the Jacksonville Council of the Navy League of the United States; Vice Chair (Chair-elect) of the Board of Directors of the Greater Jacksonville USO; Mayoral Appointee for the Renew Arlington Community Redevelopment Area (CRA) Advisory Board; member of the CRA Zoning Overlay Ad Hoc Planning Committee; member of the JAX Chamber Military Issues Committee; and member of the Veterans Hall of Fame Selection Committee.

At JU, Tuohy has also served on the Board of Trustees, was Alumni Board president, is among the “75 JU Distinguished Dolphins” honorees, was the 2000 Distinguished Alumni Award selectee, and was named the 2017 inaugural “Outstanding Military Alumnus of Distinction.” He was also the 2014 Jacksonville Business Journal Veteran of Influence honoree.

Founded in 2014 as the Military Hall of Fame Award, Tuohy’s recent JAX Chamber recognition honors veterans who have created a positive impact on the Jacksonville community. The first service member to receive the award was the late Rear Adm. Kevin F. Delaney. The following year the award was renamed in his honor.

In nominating Tuohy for the award, Fleming summed up his JU colleague’s attributes:

“Few people have contributed as much during and after their military service than Matt Tuohy. He has followed a distinguished naval career with one filled with a life of service to many veterans and military organizations and community in general. His efforts have had a significant and lasting impact on the Northeast Florida community at many levels.”