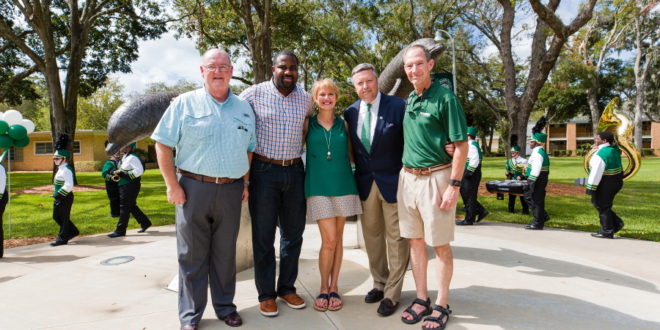 Standouts in aviation, military and entrepreneurial endeavors are recipients of this year’s prestigious Distinguished Alumni awards for 2017.

Honored at halftime of this year’s Homecoming football game as “Distinguished Alumni of Excellence Class of 2017” was Kelly Barrera ’86, while Capt. Matthew W. Tuohy, USN (ret) ’75/’03 was named the inaugural “Outstanding Military Alumnus of Distinction” and Dane Grey ’07 was recognized as the “Scott Amos Recent Alumnus of Distinction.” 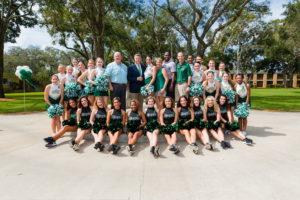 Also on hand was Rear Adm. (Ret) Dr. Michael H. Mittelman ’75, current President of Salus University, who was a member of JU’s  Distinguished Alumni of Excellence Class of 2016.

Award winners are nominated by their peers, and are JU graduates demonstrating significant professional accomplishments, community and philanthropic engagement and continued support of JU.

The Outstanding Military Alumnus of Distinction Award is a new award, presented to an alumnus who has also served honorably in the U.S. military either before or after receiving his or her JU degree. The Scott Amos Recent Alumnus of Distinction Award is presented to an exceptionally talented and accomplished Dolphin who has graduated within the past decade, either from an undergraduate or graduate program. 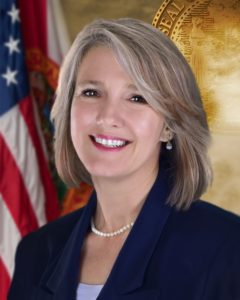 Kelly Barrera ’86
In 1986, Kelly Barrera became the first female to graduate from JU’s Aviation program and embarked on her journey in the Aviation industry with a training position with Midway Airlines.

In October 1991 she went to work for American Airlines/American Eagle here in Jacksonville as the Supervisor and Lead Agent. In 1996 she assumed the duties of Vice President of Instructor and Scheduling Operations for DriveOne in Ponte Vedra. In 2003 she became the Vice President of The National Safety Commission in Ponte Vedra. She created curriculum, initiated Community outreach programs, managed on line marketing and social media and led all Human resources efforts within the company.

Today she is the Program Developer, High School Dual Enrollment Program at Embry-Riddle Aeronautical University, working with its program in Northeast Florida.

Following two terms on the Airport Authority, she was elected to the St. Johns County School Board in November 2014.

Barrera was the Treasurer of the St. Augustine Airport Authority Northeast Florida Regional Airport (NFRA) in 2007 and served as its Chairman from 2008-2012.

She currently serves on the advisory boards of the St. Johns County School District’s Aerospace Academy at SAHS, Ponte Vedra High School’s Academy of International Business & Marketing, and PACT Coalition & Executive Committee. Barerra is a JU School of Aviation Advisory Board member and Past President, Chair of the Young Life North SJC Board, and a Young Life Metro and Community Hospice board member.

She is also a graduate of the St Johns County Chamber of Commerce Leadership St Johns Class 2013.
She and her husband, Gil, a JU Aviation Alumnus, serve on the JU School of Aviation Advisory Board. They have supported new student recruitment through receptions in their home over the years, and have given monetarily to the Support of Aviation extracurricular activities, such as the Flight Team.

Barrera has been the featured speaker at gatherings of JU’s Women in Aviation Chapter and most recently was the keynote speaker for the 2015 Aviation Awards Banquet. 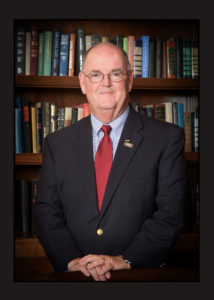 Capt. Matthew W. Tuohy, USN (ret) ’75/’03
A member of the first class of the NROTC Unit at JU, Capt. Tuohy has served our nation and community since his graduation in 1975.

His distinguished Navy career is complemented by his rich involvement within the Jacksonville community. Throughout an almost 27-year career as a Naval Flight Officer, he flew the S3A and S3B Viking. He was the Commanding Officer of Sea Control Squadron 32 (VS-32), the helicopter carrier, USS INCHON (MCS-12), and finally the aircraft carrier, USS KITTY HAWK (CV 63), as part of the Forward Deployed Naval Forces; home ported in Yokosuka, Japan. Ashore, he served on the Joint Staff in Washington, D.C., as the Assistant Deputy Director for Operations (Information Operations).

His Military awards include:

Since retiring from active duty, Capt. Tuohy’s career has been varied. He serves as JU Director of Aeronautics; a Staff Business System Analyst for Dynamics Research Corp., where he was the primary Operational and Training expert on the Simulation Modeling Analytical Support System (SMASS) at the Fleet Readiness Center in Jacksonville; Executive Vice President of Wind Energy Consulting and Contracting, where he was an active member of the senior leadership team, involved in all company decisions and strategic initiatives; Executive Vice President of East Coast Ice, where he was responsible for every aspect of operations, maintenance, and sales growth for a fleet of more than 100 stand-alone Ice House vending machines throughout Florida with annual revenues in excess of $2.5 million and the Managed Solutions Director at Incepture, a subsidiary of Florida Blue. While at Incepture he founded the Incepture Veterans Employment Taskforce (InVET), which was nationally recognized by the American Staffing Association’s “CARE” Award in 2013. He was selected as an inaugural nominee for the Jacksonville Business Journal’s Veterans of Influence Award in 2014.

In October 2014, he returned to Jacksonville University for a second time as the Director of Aeronautics for the School of Aviation. In addition to his duties within the Davis College of Business, he is a member of the Accreditation Committee, Accreditation Visit Team, Board of Trustees of the Aviation Accreditation Board International (AABI), and sits on numerous University Committees, numerous High School Aviation Advisory Boards, and the Northeast Florida Military Veterans College Network.

Since his return to Jacksonville after leaving active duty, he has been extremely active in the community. His service has been marked by his assumption of active leadership roles in many of the organizations with which he has affiliated. His service includes:

Capt. Tuohy has been the epitome of an engaged alumnus since his graduation in 1975. He has supported JU in his many roles, from undergrad to Trustee. He has been an active donor at the Order of the Dolphin level for many years, supporting both ASPIRE Scholarships and the Flight Team.

He was a long-time member of the Alumni Board and served as its President from 2010-2013. During this time he also served as a member of the JU Board of Trustees. He served on the selection committee for the “80 Dolphins You Ought to Know” during the University’s 80th Anniversary.

He has been a panelist for numerous JU Student Veterans Association orientations, assists in all Admissions Open Houses and Orientations and serves on the committee coordinating JU’s involvement in Arlington renewal. 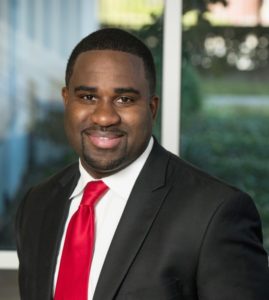 Dane Grey ‘07
It was from his dorm room that Dane Grey launched his first business as a then 21-year-old senior at Jacksonville University. With just two buddies, Grey began Elite Valet, a parking service he ran on the side while finishing his bachelor’s degree in aviation and airway management. Grey is now CEO of the successful company Elite Parking Services, with contracts nationwide.

In addition to his JU degree, Grey holds an MBA with concentration in aviation management from Delta State University.

Florida Gov. Rick Scott awarded Grey and Elite Parking Services with the Governor’s Business Ambassador Award in 2015, and he was a 2013 Jacksonville Business Journal’s 40 under 40 Award recipient.

He has logged volunteer hours at Duval County Public Schools mentoring at St. Claire Evans Academy, the Florida Commission for the Transportation Disadvantaged, JaxChamber, Police Athletic League, and at his alma mater, Jacksonville University. He has also kept in touch with the University by attending alumni events and by giving to various JU programs.

In a recent interview with Wave Magazine, Grey advised new JU students: “Never give up. I know it’s a cliché, but don’t be OK with ‘No.’ When you hear that, it only means you’re getting closer and closer, and as long as you have drive and a solid idea, everything will work out with time. Back then I didn’t look at how patience is so critical. We often want to conquer the world today, but with limited experience, you won’t know what’s out there, so you need trusted advisors to guide you and help you past the hiccups.”