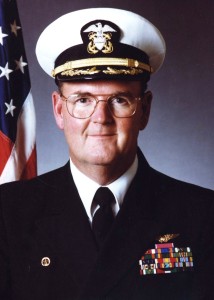 Year graduated and major: 1975, BS; 2003, MBA; also a graduate of the College of Naval Command and Staff and the Armed Forces Staff College, with master’s degrees from Salve Regina, The Newport College and The Naval War College.

Tell us about your service experience. For a Naval Aviator there can be no greater challenge than Command at Sea. I was fortunate enough to have been selected three times to have the best people our nation has to offer entrusted to my care. The young people I had the privilege to lead inspired me every day, and the memories of those days continue to inspire me. A perfect example is when I had command of the aircraft carrier USS Kitty Hawk. One night while in port in Jebel Ali, the major port for Dubai in the United Arab Emirates, we had a fire in one of our main engineering spaces. Under the best of conditions, these spaces are a major concern for heat stress and heat-related injuries. When you add to that the heat from a fire and the lack of ventilation from the systems you shut down to keep the fire from spreading, it literally becomes hell on earth. The duty section did a great job containing and extinguishing the fire, but we did have a number of heat-related casualties. I will never forget standing in the hospital spaces at around 2 a.m., watching the corpsmen dumping buckets of ice on one sailor to lower his dangerously high core temperature. All the while he is apologizing to me for leaving his shipmates to fight the fire without him.

I get angry when people say that today’s generation isn’t as good as we were. Yes they are, in every way! These are the people who are now our JU student veterans and moving to the next chapter in their lives.

What were some of your memorable experiences in college? My experience at JU was a bit different from most student veterans. I was one of the original JU NROTC Scholarship students who started the Unit in 1971.  We started with one class and added a class each of my four years. As a result, all the members of my NROTC class had the opportunity to fill leadership positions in the unit. Not only did we all do it, which is unusual, but most did it much earlier in their college career than normal.

After 26½ years, I retired from active duty and came back to JU as Director of Aeronautics. While there, I enrolled in the EMBA program and experienced what the students we traditionally think of as student veterans experience. I found JU to be a very welcoming environment for people using their GI Bill education benefits. With today’s emphasis, I understand that it is even better today.

Any favorite classes? The first time through, my favorite classes were the political science classes in my major. This was primarily because of the two primary professors I had: Dr. Joan Carver and Dr. John Sullivan. I am very lucky to still see them and count them as friends today. My MBA classes were all very good. Without a business background, I found them challenging and interesting. The professors were my coworkers in the Davis College of Business, and I learned a lot from my classmates.

Tell us about JU’s role in your transition to civilian life. JU had the most profound effect on my transition, as it was the next step on my career progression. I found that working with students was very similar to working with young sailors.

What sets JU apart? JU “gets it” as far as the veterans experience goes. This is a military town, and JU reflects that attitude toward student veterans. The military culture has grown up with the JU culture for the past 40 years, and there’s a very positive attitude toward the service that manifests itself on campus.