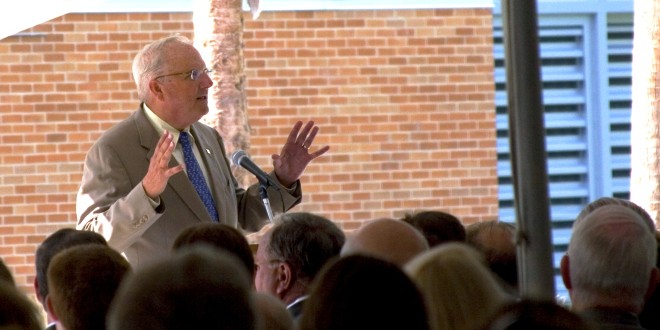 Dedication to marine science, the health of the St. John River and the future of his community has netted Jacksonville University Marine Science Research Institute Executive Director Dr. Quinton White the top annual award given by the Northeast Florida Regional Council.

It’s the second prestigious civic award he’s won this year: In August, he was awarded the 2014 Christi P. Veleta Environmental Award, given annually by the City of Jacksonville’s Environmental Protection Board to an individual who has shown long-term environmental stewardship, exhibited superior environmental initiative and consistently promoted environmental education and outreach.

The marine science professor has spent the better part of nearly four decades championing the St. Johns River and educating people about the value of natural resources. He’s considered a patriarch and gentle uniter, working both with those who have interests in developing the river and those who have concerns about protecting it.

“It would be hard to imagine a marine biologist and civic-minded leader with more dedication to his community and its future,” Dr. White’s nomination by NEFRC staff states. “We are lucky he chose to live and work in Northeast Florida.”

The council works to foster cooperation among Northeast Florida’s seven counties to enchance the area’s quality of life and its environment. Its awards recognize regional excellence in a variety of critical arenas and showcase the remarkable achievements of the Northeast Florida Region.

As founding Executive Director of the MSRI, which opened in 2010, Dr. White was charged with establishing an interdisciplinary educational and research facility on the JU campus. As the region’s premiere coastal marine research facility, it is housed in a $10 million, LEED Gold-certified, 32,000-square-foot building on JU’s riverfront campus. It includes a state-of-the-art floating classroom, and also is home to the St. Johns Riverkeeper, Florida Fish and Wildlife Conservation Commission offices and the Millar Wilson Laboratory for Chemical Research.

The facility is Dr. White’s signature achievement, though there’s plenty more he’s done for JU and the region.

At JU, his responsibilities included fundraising, fiscal planning and implementation, faculty recruitment, and long-range planning. Dr. White was appointed by JU’s President to be Chair of the Campus Sustainability Committee to develop policy and procedures and to expand the campus program to Reduce, Reuse and Recycle.

Dr. White’s public service has been highlighted by his willingness to serve the region as it seeks to choose a bright future, according to an NEFRC news release. He chaired the Natural Resources Committee of the Regional Community Institute as it created First Coast Vision, a 50-year vision for growth and development in the seven-county Northeast Florida Region. This was used to enhance the relevancy of the Strategic Regional Policy Plan update of 2013. He is a longstanding and dedicated member of the Board of Directors of the Regional Community Institute, the non-profit that undertakes policy work for NEFRC.

Dr. White also provides expertise to the Jacksonville Waterways Commission, especially as it pertains to its Manatee Protection Plan. He writes a monthly column, River Life, for the Florida Times-Union, and is a member of the Jacksonville Port Task Force, which focuses on Jaxport’s strategic priorities including the channel deepening project which would allow for larger ships to access the port.

His many other awards include Leadership Jacksonville’s 2011 Celebration Honoree as Community Trustee, the City of Jacksonville Mayor’s Environmental Achievement Award for 2010, the Hands-On Jacksonville Nature of Caring Award in 2009 and the St. Johns Riverkeeper’s River Advocate Award for 2008.