Home » All Sections » River Life: Why barnacles are a blessing and a curse 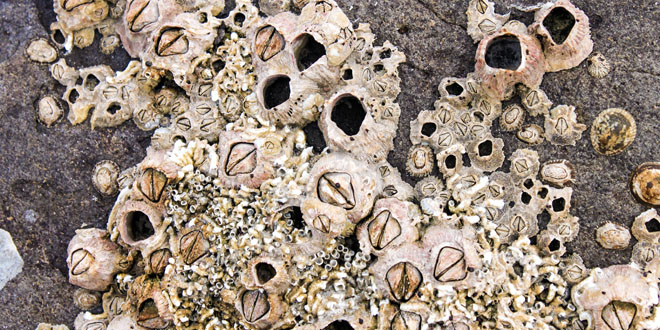 River Life: Why barnacles are a blessing and a curse

One of the ubiquitous animals in the lower St. Johns River is the barnacle. However, they are both a blessing and a curse as far as life on the river goes. A blessing in that they are an essential part of the marine food web, and a curse because they settle and grow on almost any surface exposed to seawater for very long. Most boat owners know the problem of barnacles growing on the hull of their boats if they are in the water for just a few weeks.

Barnacles often attach themselves to almost any manmade structure, sometimes to the structure’s detriment. Particularly in the case of ships, they are classified as fouling organisms. They secrete a fast setting waterproof cement with amazing bonding power that scientists are trying to duplicate commercially. Conversely, researchers are also trying to figure out a way to keep barnacles from attaching to ship hulls in an environmentally friendly way. Some of you may be old enough to remember lead-based paint that was toxic to barnacle larva. The problem was that the lead was toxic to us too.

Some people may think that barnacles are related to mollusks, like clams or oysters. However, they are in the phylum Arthropoda (jointed legs), belonging to infraclass Cirripedia (curled feet) in the subphylum Crustacea (hard exoskeleton body) and are therefore related to crabs and lobsters.

As a historical footnote, Charles Darwin studied and classified barnacles as part of his development of the theory of evolution and natural selection.

The life cycle of the barnacles can be broken down into four stages. The first larval stage is called the nauplius, which is part of the plankton community. Plankton float wherever the wind, currents, and tide may take them. During this approximately two-week period, they eat other smaller plankton and are eaten by somewhat larger organisms. At this point in their life cycle, they are an extremely important part of the food web.

The nauplius then metamorphoses (or changes body shape and function) into a non-feeding, stronger swimming cyprid larva. The cyprids will attach, head first, on an area where environmental cues indicate a safe and productive environment.  Think boat hull. If they don’t, they die.

The cyprid larva will cement itself headfirst onto the appropriate surface and develop into a juvenile barnacle. There they grow into adults, using their curled and feathery legs to capture microscopic plankton. They are usually found in the upper reaches of the intertidal zone because they can withstand periodic exposure to air. This also serves to protect them from being eaten by grazing fish, starfish, or sea urchins.

Like many invertebrates, barnacles are hermaphroditic (can be both male and female in the same body) and can alternate male and female roles over time. By the way, barnacles have internal fertilization and have the longest penis, in proportion to their body length, in the animal kingdom. This is a necessity since they are attached and in order to reach nearby females, they need to stretch as far as possible.

However, some barnacles have quite a different mode of life. There are over 1,400 species, ranging from our local barnacles, to some that are parasitic on crabs, to Gooseneck Barnacles, that we see washed up on our beaches occasionally.

Overall, barnacles make up a key component of river life.