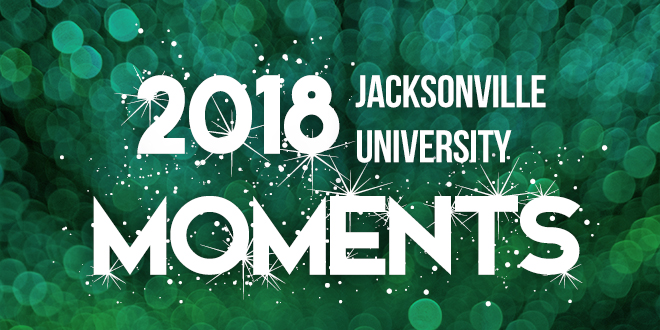 WAVE Magazine and Jacksonville University (JU) recount some of the most exciting, moving, positive, innovative, and unforgettable moments of 2018.

Five ASPIRE Investment Projects that Show Us the Future of Jacksonville University From its 2012 inception, the comprehensive ASPIRE Campaign set out to be the largest, boldest fundraising venture in the history of Jacksonville University. Now, six years later, that challenge has been met. Thousands of investors believed so much in this university’s work and collective potential that the contributions have now surpassed ASPIRE’s original $85 million goal by $36.4 million—and ahead of schedule, two years before the campaign’s planned closing date.

Through the Lens of Progress: An Interview with President Tim Cost ’81 The amount of progress created on the Jacksonville University campus over the past five years has accrued at a rate that should leave those watching breathless about future possibilities. Cultivating a private university in a vibrant city, located in one of the fastest growing regions in the world, and during one of the most explosive periods in history, is exactly the role Jacksonville University President Tim Cost envisioned from the beginning.

JU CFA Team Wins National Research Challenge & Looks Forward to Global Final Judges announced JU had won the Americas Regional and would be one of five teams in the world to compete in the Global Final on April 27 in Kuala Lumpur, Malaysia. The victory serves as another building block in JU’s quest to be viewed among the elite. The Davis College of Business already has the prestigious designation of being accredited by the Association to Advance Collegiate Schools of Business, but there are other aspirations.

Deep-rooted Green Efforts Gain Campus Its Third Straight Tree Campus USA Recognition Jacksonville University has gained official 2017 Tree Campus USA recognition from the Arbor Day Foundation, the third year in a row it has been singled out for its commitment to effective urban forest management. Only 344 campuses – fewer than 10 percent of all public and private U.S. colleges – meet the requirements for the recognition. Just 15 campuses have the designation in Florida, and only a few of those are private universities.

“We’re just getting started. It has been five years, and we’re ready for our next chapter together as an institution. Let’s get ready to deliver several more wins for this University in terms of progress. Together, we have changed the slope of progress.” ~ Tim Cost, Jacksonville University President