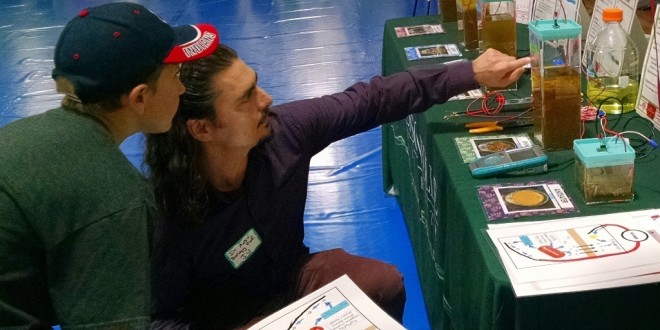 Dr. Anthony Ouellette of the Biology and Marine Science Department demonstrates microbial fuel cells with a youth at the Florida STEM & Health Expo.

Those were just some of the demonstrations JU students and faculty made recently as they showed the power of science to thousands of attendees at the third annual Florida STEM & Health Expo at River City Science Academy. 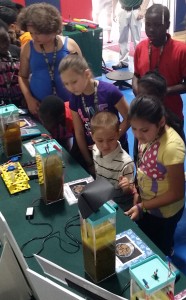 JU’s science and engineering programs are expanding and upgrading – two new bachelor’s degrees in engineering and one in computing science have been added, along with $2 million worth of new and refreshed laboratories – and the University is reaching out to curious youths in the community and beyond to show them the power of creativity, imagination and discipline that fuels STEM-related fields of study.

Among various avenues, JU is using on-campus presentations and contests, YouTube videos, school visits and attendance at youth STEM-related events to get its message across.

At the STEM Expo, “Getting to share our microbial fuel cells with younger students was truly a pleasurable experience,” said JU senior David Borrelli, a double major in Art and Chemistry. “I got a great deal of enjoyment out of the ‘Ew! Gross! Cool!’ kind of reaction from a majority of attendees. I can remember being at that age and being so fascinated by everything science-related. It was almost surreal to be on the other side of the table this time, helping foster the imagination of the next generation of scientists.”

The STEM fields are in a period of significant enhancement at Jacksonville University. Millions of dollars spent on laboratory renovations, coupled with new equipment, instrumentation and programs, are opening new areas of teaching and research.

In another approach to firing young students’ imaginations, the new Collaborate JU is creating videos that showcase the interdisciplinary research being conducted as part of the Florida EPIC (Entrepreneurism, Policy, Innovation, and Commerce) Program. EPIC gives JU students real-world, project-based learning experiences, and these are ripe for visuals that can attract the attention of middle- and high-schoolers. Already, videos on Biomechanical Assessment of Athletes, Coral Reef Restoration, Mobile Water Quality Monitoring and Oyster Reef Assessment are up and available for viewing (click here).

Meanwhile, the University is hosting the Northeast Florida First Tech Challenge Jan. 22-23, with hundreds of the region’s high-schoolers accompanied by their parents taking part in a robotics competition – a discipline involving the use of everything from mathematics to engineering to computing science. The idea is to help young students make the connection between academics, theory, practice and implementation.

“At Jacksonville University, we employ significant hands-on approaches to scientific learning and training, which translate into competitive graduates who are ready for the workforce as well as entrance into graduate and professional programs,” said Ouellette.

An added bonus of attending JU is that training scientists in a culture of the liberal arts exposes them to a wide range of disciplines and intellectual topics, which can go a long way toward sparking and sustaining creativity, he said.

“Being a scientific or technically minded person is necessary for becoming a solid scientist – however, when you throw creativity into the mix, the fun and advancements really come into play.”

The free Florida Stem & Health Expo is designed to ignite motivation to explore science, technology, engineering, mathematics (STEM), and health education, organizers said. River City Science Academy students, their family members, staff and the public are encouraged to come and build, play, learn, discover, explore and spend time together while having fun and being safe.

JU’s fuel cell project came complete with educational materials – and leavings courtesy of the Jacksonville Zoo’s elephants, okapi, anteaters, warthogs and rhinoceroses. Bacteria digest material in the feces, and the fuel cells harness some of the resulting energy as electricity, Ouellette explained. The project was led by Rhea Derke, an April 2015 graduate with a B.S. in Biology and B.S. in Music Business and winner of the Outstanding Biology Student Award and Renaissance Award in Science and Music.

There’s a serious cause behind all that kaka: Researchers throughout the world are investigating ways to harness the energy in wastewater treatment plants by adapting the treatment facilities into microbial fuel cells, Ouellette said.

“This project was an extension of microbial fuel cell projects in the general microbiology class, where students design and build individual fuel cells. One student used rhinoceros poop last year – which really captured people’s imagination, so we decided to expand on this, and kind of have a competition between the animal droppings,” he said. “People of all ages were intrigued by the concept of converting animal waste to electricity, and the project incorporated elements of biology, chemistry and physics.”

For the record, the rhinoceros poop-powered fuel cell didn’t mess around: it gave the highest-voltage output, at around one volt.

Lane intrigued attendees with a number of displays and activities, including the jumping ring demo. In this activity, an aluminum ring is placed over a tall coil of copper wire. When electricity is run through the wire, it creates a magnetic field that launches the ring into the air a few inches. But, put an iron rod inside the copper coil, and the ring rockets a few feet into the air, since iron enhances magnetic fields.

The physics principle of rotational inertia was demonstrated two ways: first, by having volunteers try to spin rods with the rods’ weight distributed in different places, leading to humorous scenes in which parents struggled with their rods while their children twisted away with ease; and second, using a classic turntable method in which participants spin with arms outstretched, then speed up just by pulling their arms in.

“The Expo was a very lively event, with lots of interested families visiting,” Lane said. “It was great to show the attendees that the basic principles of science can yield some surprising results, and to get to network with other organizations interested in promoting STEM in the community.”

The robot uses ionic polymer–metal composites (IPMCs) — synthetics that display artificial muscle behavior under voltage. Made with the 3D printer, the robot, complete with oscillating “tail” propulsion, is hoped to eventually collect data in bodies of water including the St. Johns River, to monitor temperature or pollution underwater.

“It is a great pleasure to advertise our majors, and also interesting to explore this community,” Wang noted.