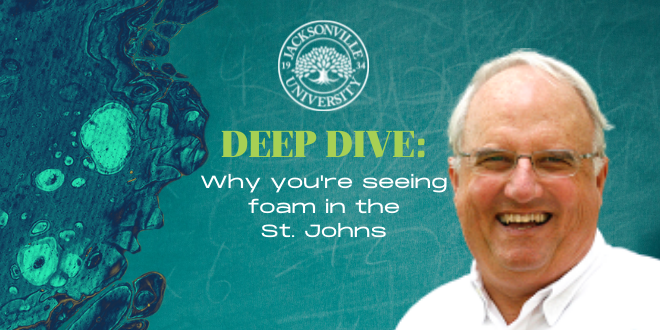 River Life: Why you’re seeing foam in the St. Johns

When you look at many rivers and oceans, the water looks so clean and inviting. But if you take a clear glass jar, fill it with that same water, and look at it closely, you will see that it is full of tiny particles. Seawater and river water contains a huge array of dissolved salts, proteins, fats, dead algae and tiny organisms, plus detergents and other pollutants, and a bunch of other bits and pieces of both natural and manufactured material. Today, you will also see plastics, both visible to the unaided eye, but also microscopic sized particles. More on that in a later column.

Then, if you shake this jar of ocean water vigorously, small bubbles will form on the surface of the liquid. That is what is called sea or river foam. Recently, this foam has been seen on the St. Johns River.

Sea, or in our case, river foam forms the same way – but on a much larger scale – when the water is agitated by wind and waves. Locally, algal blooms are one common source of the river foams. We also can have large blooms of algae decaying offshore and great amounts of decaying algal matter often wash ashore. The sea foam forms as this organic matter is churned up by the surf. You can see billowing pillows of foam blowing along the beach too.

In the St. Johns River, salinity, or specifically changes in salinity, can cause the microscopic organisms to die. As they die, they release the lipids (oils) and proteins into the water. That is what allows the foam to form when whipped by the wind.

Most sea foam is not harmful to humans and is often an indication of a productive ocean or river ecosystem. But when large harmful algal blooms decay, there are potential for impacts to human health and the environment. Along Gulf Coast beaches during blooms of red tide, for example, popping sea foam bubbles are one way that algal toxins become airborne. The resulting aerosol can irritate the eyes of beach goers and poses a health risk for those with asthma or other respiratory conditions. Fortunately, red tide is not very common in northeast Florida.

Here in the St. Johns River, the dissolved organic matter is the result of the breakdown of the organic debris, such as leaves, twigs and the tannins they contain. Tannins or tannic acid gives the water that brown tea color. They also make the water slightly acidic, so that it tastes sweet. That is where swamp water gets the name sweetwater.

This leaching process is much like a tea bag which also gives the color to the beverage. The same process that is at work with a tea bag occurs in the headwaters of the St. Johns River.

These same dissolved organics also act like a surfactant. Surfactants act to reduce surface tension. We have surfactants in our detergents to help break down grease and solids when we wash something. Surfactants also function as wetting agents, emulsifiers, foaming agents, or dispersants. The word “surfactant” was coined about 1950 by blending the phrase “surface-active agent.”

So when you see that foam on the water, in most cases, it is a natural process. You have nothing to fear. Relax and enjoy the water.

How are manatees doing this year after the record number of deaths in 2021? Overall, the number of manatee deaths is not as high as it was last year, but we are still losing too many manatees to human related causes. They are still starving from the lack of submerged aquatic vegetation. Feeding them is not the answer but it helps in the short term. We need people to recognize that over-fertilized lawns and failing septic tanks are a lethal combination for manatees.