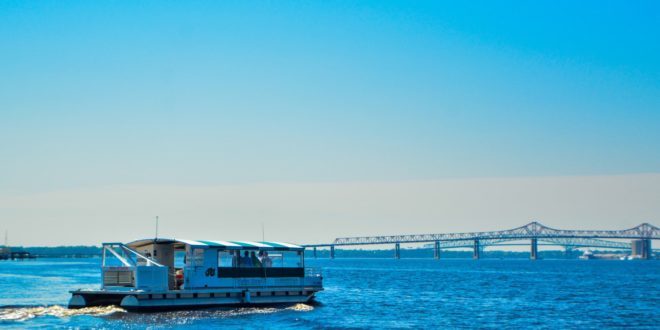 JU's state-of-the-art floating classroom, the LARKIN, is a 48-ft by 12-ft pontoon vessel fully equipped with lab stations, electrical power and space for up to 28 people.

RIVER LIFE: Why Mudflats Are Critical to a Healthy Ecosystem

Growing up in the Tidewater region of southeastern Virginia near Norfolk, we used to play in what we called the “mudflats.” Later, in college and graduate school, I began to appreciate how important these areas were to the ecology of the marine ecosystems I was beginning to study.

These so-called mudflats are the salt marshes and wetlands that I have come to recognize as absolutely critical to having a healthy environment, especially for our rivers, estuaries, and oceans. However, in the 1950’s and 60’s, we didn’t recognize their importance. They were viewed as wasted space that needed to be bulkheaded and filled to make the land usable.

These littoral zones are the edges of tributaries, rivers, streams, and ocean where vegetation grows that requires constant water. Both the submerged aquatic vegetation often called seagrasses, and the emergent wetland vegetation, typical of salt marshes, provide essential food and habitat for virtually all marine and aquatic life at some point in their life. Often these areas are the nursery grounds for many marine or aquatic species. In fact, nearly 90 percent of the commercially important species of fish, crabs, oysters, and clams rely on these areas for their survival.

However, they also serve another critical function. They are the kidneys of our planet. Mudflats filter the water as it runs off the land and help to absorb sediment, nutrients, and pollutants. As we filled in wetlands, we also watched as water quality declined.

Still, another function of these wetland systems that we are just beginning to appreciate is their ability to protect upland areas from storm surge and flooding. These areas function like sponges and buffers as the water rises and inundates the fringes of our oceans, rivers, and estuaries. This protection becomes even more important as sea level rises. Ask the residents of San Marco and Riverside if they would like something to protect them from flooding.

Here in the St. Johns River, we have a history that mirrors the rest of the world in the filling and paving of our wetlands. We viewed this land as more valuable if we could build something on it, rather than letting it fulfill its natural function. The ecological services provided by these areas in water treatment and flood control is worth thousands of dollars per acre. Yet we routinely watch, even today, as wetlands are converted for other functions.

One especially consequential impact of the dredging of our river, combined with the filling and paving of the wetland, has been the change in salinity of the river. Because we have an unlimited amount of seawater just east of Jacksonville, little changes in the hydrology of the river have a tremendous effect on the ecology of the river.

It is not the amount of change but the speed that causes stress for the marine organisms in the river.

Dredging allows more water to quickly flow into the river during normal tidal fluxes. As we have filled in wetlands and paved over large areas of land, we have increased the amount of runoff that flows into our creeks and rivers. We have lost the sponge and buffer effect for rainwater. The St. Johns River salinity drops quickly.

Likewise, when it stops raining, we no longer have the sponge effect of the wetlands that gradually lets water seep back into the system, so salinity rises quickly.