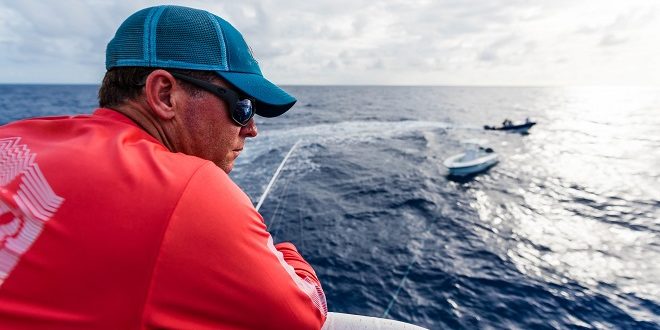 RIVER LIFE: When River Health Links to the Ocean

Charismatic megafauna is a term we use for those large animals that people find fascinating. Manatees, dolphins, and whales come to mind. These often huge creatures can cause a sense of wonder when we see them either live or in pictures. But the real king of awe is the Great White Shark.

Some of you may remember Steven Spielberg’s 1975 movie Jaws. And yes, I know the crusty sea captain was named Quint, but no relation. That particular movie may have done more harm to sharks than any other misinformation ever disseminated. Sharks are not really man-eating machines that hunt down unsuspecting surfers and swimmers. No, they are simply at the top of the food chain and humans see other top predators as a threat that must be eliminated.

Earlier this week, Jacksonville University’s Marine Science Research Institute honored Chris Fischer with the 2018 Marine Science Pioneer Award. Fischer is the founder of OCEARCH, the largest shark tracking organization in the world. They have completed 33 expeditions around the world, collaborated with almost 200 scientists, and studied over 300 sharks of various species. But their target has been the White Shark. This is truly a pioneering work. Chris Fischer and OCEARCH are changing the way science is done.

They do this by sharing their data with anyone. You can download the OCEARCH Global Shark Tracker app on your smartphone or tablet. You can instantly see where the sharks are and where they have been.

So why should we care about the White Sharks?

Because, as goes the White Shark, so goes the ocean, and to some degree, the St. Johns River. The White Shark is the key to a healthy, thriving ocean. As a top-level predator, if we kill and destroy them, then, in turn, their prey become more abundant. When the number of their prey increases, they eat the next lower level in the food chain which is often the larvae and young of other marine life. It is a domino effect. The balance established through millions of years of evolution is quickly overridden by man’s aggressive elimination of these top-level species.

We see the same phenomenon in the terrestrial environment where deer herds explode when their predators are killed and removed from the food chain. The deer population can quickly overgraze the forest, leaving deer herds decimated by starvation and disease. Today we manage the deer population through hunting, where humans have become the top predator.

However, population control of fishery stock is a challenging and inexact science because it is so difficult to access the size and abundance of the fish.

So, the data generated by OCEARCH becomes critical to understanding the Great White Shark Life History Puzzle in the North Atlantic. They are slowly unraveling the movement patterns for mating and birth, giving a better understanding of ways to manage the population back to abundance. The Marine Science Research Institute at JU is pleased to be able to partner with Chris Fischer and OCEARCH in this effort.

One of many things to influence the health of the St. Johns River, does indeed extend out into the ocean where understanding the life history of the White Shark is the key.

Has the St. Johns River recovered from the impact of the hurricanes? And the answer is “Yes, sort of.” Sorry for any confusion, but the human impact on the river has resulted in a “new normal.” The hurricanes upset that new normal with the tremendous amount of rain. The recent lower than normal rainfall is allowing the river to establish its salinity patterns that existed prior to the hurricanes. But the continued alteration of the river will force it to remain is an almost constant state of flux. So, yes, sort of.