Home » Topics » Academics » River Life: The Heat Is On 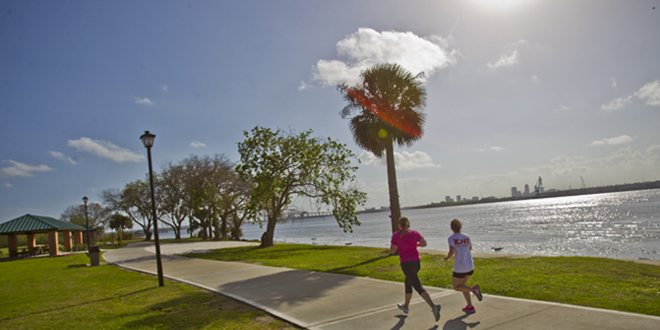 River Life: The Heat Is On

Hurricanes, algae and heat: welcome to summer time in northeast Florida. This year, spring turned quickly into summer. This very hot summer exceeds anything in my memory of such extreme heat this early. We expect the heat in July and August, but not May. This has caused the river to be warmer than normal for this time of year. Coupled with the lack of recent rainfall, we now see a warm, nutrient-rich river that is a recipe for an algae bloom.

Combine the heat and the algae with the distinct possibility of a hurricane and we have what may be the new normal for Florida. Regretfully, that may also pose problems for life in the St. Johns River. Surprisingly, this comes as the river still recovers from the impacts of hurricanes Matthew and Irma.

For the past two years, we have seen the salinity readings below what had become the typical level since excessive rain diluted the salt content of the river. Years of dredging, modification of uplands and withdrawals from the aquifer caused the salinity to creep up. The tremendous amount of rain, especially from Irma, pushed salinity down to what was more like its historic normal. Animals that could move, did so. Those that could not either adapted or died.

Regretfully, algae blooms have become all too common in Florida during the summer. As more and more people move to the state, so does their impact. To accommodate these folks, we build roads, homes and such necessities as sewage treatment plants. We often talk about fertilizer runoff from lawns, farms and golf courses, but recently the impact of nutrients from sewage waste has increased.

It is not a topic that many of us like to ponder, but when we flush, what really happens? Sort of out of sight, out of mind.

As our waste is processed and broken down, nutrients are released into the wastewater stream. In general, our wastewater treatment utilities have done a pretty effective job of reducing the nitrogen, phosphorus and other components that are discharged. However, one product that is left behind is called bio-solids. This is a nutrient-rich material that can be used as a soil enhancer, or fertilizer.

And that is where the problem arises. While a little bit is fine, too much can lead to problems. Just like over fertilizing can kill your lawn.

Bio-solids were spread over the fields in the Lake Okeechobee basin that, in time, caused massive algae blooms in south Florida. So, the discharge of bio-solids was banned in south Florida. Nevertheless, they continue to be spread in the St. Johns River drainage basin. Those nutrients are now making their way north, triggering algae blooms as they increase in concentration along the way. We saw algae blooms this year much earlier than expected. If you would like to know more, check out the YouTube video from Jaksonville University’s “Science of..” series about the recent algae bloom https://youtu.be/sWMmsxJRAe4 .

While a little bit of algae is good, a lot can be harmful. Algae produce oxygen in the daytime and use oxygen at night just like all living things. It is when the oxygen level drops at night that we get the fish kills. To compound the problem, the warmer the water, the less oxygen it can hold.

So what does summer hold? Look for at least one major hurricane to make landfall, expect the heat to continue, the algae blooms to get worse and the fish kills more frequent. Welcome to summer in Florida.