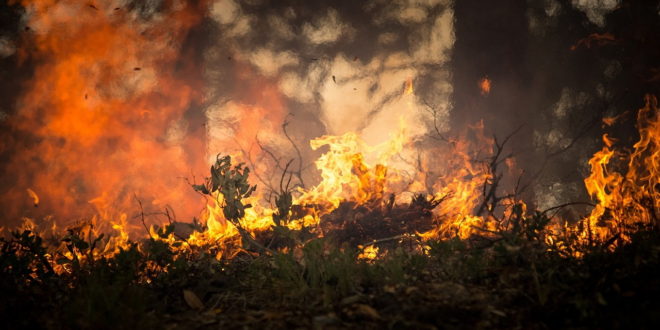 Fire and water don’t mix, and fire when coupled with a lack of water can create a dangerous combination. This is readily illustrated in the huge wildfire that has recently burned just north of the Florida-Georgia line, and multiple fires occurring across Florida.

The Florida Forest Service website shows more than 2,000 wildfires since Jan. 1, with more than 100,000 acres burned. This is in addition to the 150,000-plus acres of the West Mims Fire in the Okefenokee Swamp in Georgia.

What impact do forest fires have on nearby lakes and rivers like the St. Johns? The simple answer is: It’s significant, but can vary widely depending on local conditions.

Fire is a natural part of the normal ecology of many ecosystems. But as we cleared forests and built structures, we came to view fire as our enemy. The U.S. Forest Service’s “Smokey Bear” fire prevention character and campaign were also too successful. When fires happened, we quickly put them out. This, in turn, allowed for the buildup of forest materials that could burn hotter and longer than might have previously happened.

To combat this, we have a program of what is termed “prescribed burns” to try and lessen the amount of fuel that remains in today’s modern forest. This program has been moderately successful in reducing the risk of major fires. But when you have a prolonged drought such as the one we are experiencing now, the risk of fire can be great. And the cause of the fire doesn’t matter: a fire caused by a lightning strike can cause just as much damage as one from a person burning trash.

By the way, there is currently a ban on any outside fire or burning in every Northeast Florida county.

Looking at the effect on our waterways, consider that “what goes up, must come down.” That is true of the smoke and ash released from a forest fire. People close to a fire often experience a dusting of ash on their property, usually highly visible on car hoods and windshields. That material also lands in our lakes, rivers and streams, but it is really a very small component of the impact the fire will have on water quality.

The bigger problem comes when the rain returns. As I write this column, rain is predicted over the next few days. How much and how long will determine the significance of the impact.

Forested areas retain water when it rains. The trees with their leaves, the bushy understory and the grasses all combine to slow the amount of water reaching the ground. The ground initially can absorb much of the water. And only when the soil is saturated do we get water running off into receiving bodies like lakes and streams. But a relatively small percentage runs off.

Burning causes these forests to lose their tree canopy, understory of bushes and grasses. Fire also reduces the ability of the soil to absorb water. This results in the rain running off quickly, carrying with it much of the ash and debris left by the fire. This material is high in nutrients.

That is when the damage can occur in nearby water bodies. Not only does the material contain large amounts of nutrients, leading to algae blooms, but it also contains a high concentration of very fine particles. These fine particles can cover any submerged aquatic vegetation and interfere with photosynthesis. The particles also clog the gills of fish and invertebrates. Sort of a double whammy.

A system like the St. Johns River, with its slow-moving water through a complex system of lakes, creeks and streams, is especially susceptible to runoff from forest fires.

It is important that we reduce the amount of impact from things like lawn fertilizer that we can control, so that the river can cope with things we cannot control, like forest fires.

Will OCEARCH be part of the JU Marine Science Summer Camp this year?

We are very excited that our new official partner OCEARCH with its shark tracker website will be part of this year’s camp. Campers will interact with OCEARCH staff, and we’ll be designing an experiment to be done in conjunction with this shark collaborative’s upcoming expeditions. Each five-day camp is open for students 14 to 18 during the last two weeks of June, beginning June 20. More information is at http://www.ju.edu/msri/education/summer-camps.php.