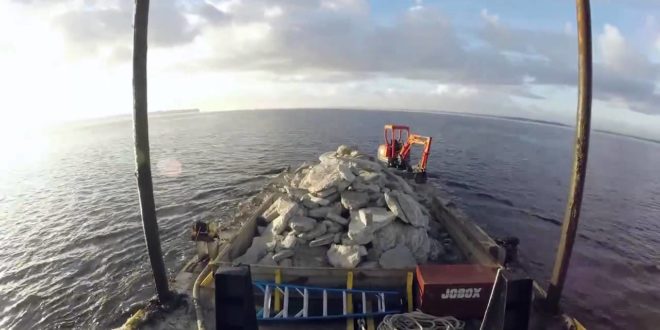 The St. Johns River is a fascinating ecological feature of Florida. It is critical to the very fabric of Jacksonville.

I often sit in amazement while observing the impact of the river on our lives, and likewise, the impact of our lives on the river. Despite our continued use and abuse of the river, it still provides us with exceptional aesthetic beauty, rewarding recreational opportunities, and ecological benefits.

As I have said many times, just about when I think I understand the river, it goes and does something that amazes me. Such has been the case recently with the research we are doing on artificial reefs that were created in the river in December of 2014.

This column has discussed the impact of filling in the wetlands while paving over upland forests to build cities and communities along the river. This has occurred not just in Jacksonville, but also around the world. As a society we think we can control natural forces without suffering any consequences. This is simply not true.

Sometime we try to mitigate, or offset, the negative impacts of our activities, by trying to enhance the environment. Sometimes it works, sometimes it doesn’t. This mitigation principle was at work when the City of Jacksonville, with help from Jacksonville University, the Florida Fish and Wildlife Conservation Commission, and the non-profit Coastal Conservation Association, placed piles of concrete rubble in two places in the river, near San Marco, just south of the Fuller-Warren Bridge.

The Why of Reef Building

The goal of building reefs in the river is to enhance the biodiversity of the area while providing food and possible fish nurseries. After the initial colonization, the reef community becomes more and more complex. Many other species live on and become part of the ecosystem.

When bare concrete, or any other clean surface such as a boat hull, is placed in the water, the normal progression is for what is termed a “fouling community” to develop. First, a bacterial film will cover the surface, and that in turn, leads to the attachment of any larval aquatic life that is present in the water at that time.

For instance, if barnacles are reproducing, then they may attach first. However, if oyster larvae are present, then they may gain the first foothold. These various species will compete for space in what is a literally a “species eats species” fight. The first species there commands who will be able to colonize next. Why? They eat the competition.

When you deploy reef material, what settles and grows depends on several factors. Time of year, reproductive cycle and, specific to estuarine systems like the lower St. Johns River, salinity.

This was exactly what happened for the first three years of the reef’s existence. Then came Hurricane Irma.

The massive amount of rainfall that came with Irma greatly altered the salinity of the St. Johns River. Coupled with an overall increase in rainfall since 2017, the salinity has changed far beyond my expectations.

The initial estuarine organisms that settled on the concrete were mostly marine rather than freshwater oriented. Remember, an estuary is where the river meets the ocean and creates a brackish environment. Depending on the amount of freshwater, the estuary can be marine or freshwater dominated.

Following Irma, we saw the reef community change as huge amounts of fresh water flowed out of the river. That freshwater flow has been maintained with little increase in salinity due to the amount of rain we have had. When you link increased rainfall with our history of filling and paving, you produce an ecosystem that has difficulty regaining its balance.

Even after two years of post-Irma conditions, the reefs still show the impact of the freshwater flood that they continue to experience.

How do animals in the river cope with cold weather?

Most marine animals are termed poikilothermic, which means varied temperature. We often call these animals “cold-blooded,” but that is really a misnomer.

Their temperature usually reflects the ambient temperature of the environment in which they are living. When it gets colder, many of these animals leave the area and seek warmer environments, or they burrow into the mud for protection.  Others become inactive, or become very sluggish as their body’s metabolism slows. In some extreme cases, severe cold can lead to death.