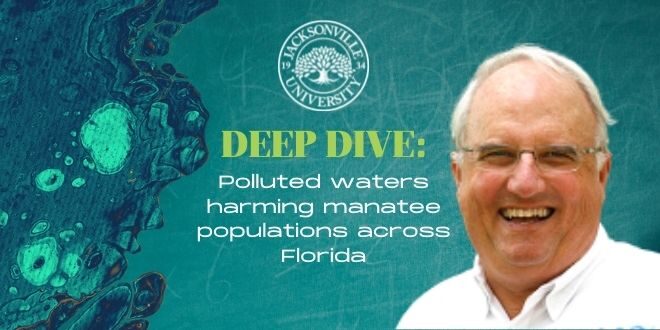 Our charismatic megafauna, the manatee, which is also the Florida state mammal, is in trouble, again. The manatee, or sea cow, is that large, so-ugly-it-is-cute, aquatic plant-eating, gentle giant that can weigh 1,000 pounds or more. Maintaining that size and weight is part of the problem. Manatees need to eat up to one-tenth of their body weight in aquatic plants every day. That means a manatee weighing 1,000 pounds will need to eat 100 pounds of food each day.

Aquatic plants need sunlight, with warm, clear water and just a little bit of nutrients to grow and thrive. The manatees will graze on the plants, then the plants will grow back. It’s a nice cycle. Clear water is the key. In some environments, like the dark tannic acid-stained water of the St. Johns River, the submerged aquatic vegetation can not grow in water much deeper than 3 feet.

The balance between the amount of food and the number of animals that can be supported is the carrying capacity of the environment. That balance has been determined over thousands of years of evolution.

That balance is being upset because of human activity, and inactivity.

In the ’70s, scientists realized that the manatee population was in danger of extinction because they were dying faster than they were being born. The math was fairly simple. More deaths than births equal a declining population that eventually reaches zero. And extinction is permanent. No do-overs.

But to our credit, people rallied to support saving the manatee. We managed to turn the tide by creating an awareness of what was killing them. We enacted rules and regulations that allowed the number of manatees to approach what may have been a historic high. We established manatee speed zones that required people to slow down when their boats might encounter a manatee. We created safe havens for the manatee and also reduced the deaths from other preventable causes like crushing deaths by ships and lock systems in our waterways.

In our zeal to save the manatee, we also promoted thermal pollution by requiring power plants to maintain warm water discharges that allow manatees to overwinter in areas that are too cold for them to survive without the artificial habitat. Not all of our ideas were good ones.

We are not sure how many manatees may have existed prior to the Spanish finding Florida. But we did go from a declining to a healthy population that may have exceeded those numbers. Manatees were a success story.

Regretfully, that is not the case today. The manatee population is again stressed due to human activity and inactivity. In 2021, a record 1100 manatees died in Florida, many starved to death because of the lack of food. This lack of food was not caused by too many manatees overgrazing the submerged aquatic vegetation.

The decline was caused by human impacts to the ecosystem. In the Indian River Lagoon, decades of leaking septic tanks and excessive nutrient runoff from lawns and fields caused algae blooms, shading out light and leading to the collapse of the grass beds. In the St. Johns River, it was perhaps more complicated with things like increasing salinity due to damming the Ocklawaha River, dredging, and more leaking septic tanks and nutrient runoff. That clear, clean water is gone. The aquatic plants can no longer survive in parts of today’s Indian River Lagoon nor the lower basin of the St. Johns River.

The decline has also been caused by our own inactivity. We have allowed uncontrolled growth, continued permitting septic systems and promoted economics over the environment.

Meanwhile, manatees continue to die in record numbers. We lost 47 in the first three weeks of 2022. We instinctively want to do something. So, federal and state agencies have started to feed some manatees in an experimental program. An estimated 400 manatees are being fed in a trial area in an effort to reduce the number of deaths. Is this the answer to the problem? An emphatic NO! Just like the thermal pollution was not the best long-term solution, it was a temporary fix. So too is feeding manatees. But it is in our nature to do something.

The key is healthy springs, rivers, bays, and lagoons where people and nature coexist in harmony with each other. It’s time to restore the Ocklawaha River, to promote low impact development and realize that a thriving economy and healthy environment go hand in hand.

Why are manatees so susceptible to cold weather? Don’t they have a thick layer of blubber like other marine mammals?

Yes, they have a fat layer that is called “blubber”, but it is not as thick as the true blubber layer that is found in other cold-water marine mammals. It does not keep the manatee warm in cold water. When the water temperature falls below 68 degrees F., manatees become cold stressed and are in danger of dying if they cannot find warmer water.