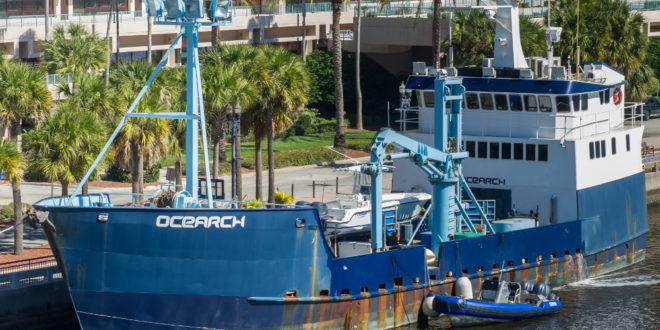 The M/V OCEARCH visits downtown Jacksonville after its partnership was announced with Jacksonville University.

RIVER LIFE: OCEARCH at Jacksonville University may be near center of great white shark puzzle

There’s been a lot of excitement recently around the marine science program at Jacksonville University. On Feb. 9, we announced a cooperative partnership with OCEARCH, which is by far the most widely recognized shark tracking organization in the world.

This nonprofit organization has specialized in the “charismatic megafauna” known as the great white shark, and in doing so has created a level of social media awareness never before seen around science. OCEARCH has produced critical scientific data related to the tracking of such keystone marine species as great white sharks, tiger sharks and now whale sharks, while also providing educational opportunities and conservation outreach programs on a global scale.

Chris Fischer, the OCEARCH founding chairman and expedition leader, is now Explorer in Residence at JU. OCEARCH has completed 27 expeditions, with No. 28, the Low Country Expedition, now in progress off the South Carolina and Georgia coasts. Recent expeditions have included Jacksonville (twice), North Carolina, Long Island and Nantucket.

Mary Lee, a shark tagged off the New England coast, first appeared 200 yards off Jacksonville Beach back in January 2013. That shark, named after Chris Fischer’s mother, introduced him to Jacksonville, which in turn led OCEARCH to conduct its first expedition here in February and March of that year, when they tagged Lydia. They returned to this area in February 2016 for another try.

It turns out that Jacksonville may be the center of what Chris Fischer calls the “North Atlantic Great White Shark Puzzle.” What an exciting opportunity for Jacksonville. With OCEARCH at Jacksonville University, we can bring tremendous potential benefits to our students, faculty and the entire Jacksonville community. OCEARCH will have an academic home at the JU campus in the Marine Science Research Institute, and the M/V OCEARCH vessel will be home-ported in Jacksonville.

OCEARCH new permanent home with the St. Johns River at its front door and the Atlantic Ocean at its back door is ideally positioned to study the shark populations of the North Atlantic. We are extremely excited about the reciprocal learning connections that go beyond Marine Science. Students will be offered hands-on experience in other disciplines such as film, marketing, public policy, education, math, engineering, aviation, sustainability, communication and even art, music and literature.

The possibilities are truly endless, and fit into our traditional emphasis on innovation, scientific inquiry, experiential learning and sustainability.

Our intention is to expand the scope and research of OCEARCH to include issues like plastics in the ocean, and to use the social media platform created by OCEARCH to raise ocean awareness. Fischer’s philosophy of open data and sharing results fits perfectly into the synergistic nature of the Marine Science Research Institute at JU.

So, why study sharks at all? Sharks are what are termed keystone species. The entire ocean ecosystem is dependent on these top-level predators. As sharks go, so goes the health of the ocean. Scientific literature is full of examples that show that when a keystone species is eliminated, the ecosystem collapses. Sea otters in California are a well-documented example.

Sharks are being killed by the millions every year, for sport, and commercially for their fins. Shark fin soup is an expensive delicacy enjoyed in Asia. But sharks have a low birth rate, and it takes years to replace a shark in an ecosystem.

Many people have a somewhat irrational fear of sharks, perpetuated by the movie “Jaws.” So the more we understand about these animals, the better we can protect them and our oceans.

Are there ever great white sharks in the St. Johns River?

While some species of sharks do occur in the river, there is no evidence that great whites enter the river with any regularity. But there is good evidence that they occur just off our coast. Both OCEARCH tagging and tracking, and local fishers have documented sightings. Recently, cell phone cameras have contributed to better identification of these animals. It used to be that every big shark sighted was a great white that was always bigger than the boat. Thankfully, that is no longer the case.