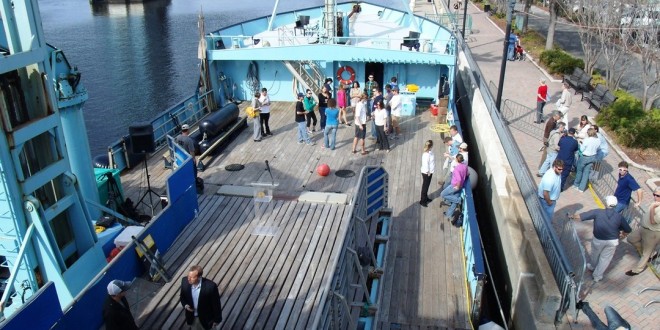 This is the time of year I’m glad I live in Florida. A snowstorm hit the Northeast and, while it is seasonably cold here, it is not snowing, just cold. Now I know some of you think our weather is too cold, but I like the winter when it means sweaters and jackets — but no shoveling snow.

This is also the time of year we get some pretty interesting visitors, and I don’t mean human snowbirds. I mean right whales and great white sharks.

Neither of these animals comes into the St. Johns River with any regularity. In fact, I only know one case, in January 2011, when a right whale wandered into the river, and what an adventure that was for local mariners. The river was essentially closed to boat traffic until the whale swam back offshore.

The right whales migrate from the Northeast coast to South Georgia and Northeast Florida during the winter to have their calves. Ships are required to watch for whales and slow their speed when in the area, and to avoid them as much as possible. Such protective measures have helped the whale population grow from about 300 in 1990 to more than 500 today.

Our other seasonal visitor strikes fear in many people, much of it unwarranted, due in part to the 1975 movie “Jaws.” The “dun-na dun-na dun-na” of the sound track is all it takes to make most people think “SHARK!” However, sharks are extremely important to the overall health of the world’s oceans. They are at the top of the food web. They reproduce slowly compared to other marine species.

For years, we heard reports of great white sharks in our offshore waters. Many of these sightings were questionable at best. The shark in question was always bigger than the boat, regardless of the size of the boat. But with the advent of cell phone cameras, we get much better identification of these sharks. And we do get great white sharks offshore. Katharine, a great white tagged in 2013 off Cape Cod, Mass., returned recently to waters off the First Coast.

But it gets better. Recent research by Ocearch — which first tagged Katharine — has given us new tools to use to study sharks. Ocearch is a unique scientific organization that has been tagging sharks around the world. With each tag, we get a positive species identification. They even tagged a great white off Jacksonville in 2013 when we had students from Jacksonville University and the University of North Florida on board to observe.

These tags emit a “ping” when the shark comes to the surface, so it is possible to track the whereabouts of the shark and see where it has been. That has given us the ability to see where the sharks are located in almost real time. And they are offshore now.

Jacksonville University marine science students are using the Ocearch shark tracker data to look at a couple of questions about great white sharks: Is there a correlation with right whale migration? Do the great whites use our inlets to feed or reproduce? We have some ideas but still have much work to do before we can answer either question.

What is the name of that island under the Mathews Bridge?

According to Arlington resident Charlie Hamaker and assorted news reports, Exchange Island had several names in the past, such as Rock Island and Mud Island, probably because it was once just a pile of rock and/or mud that was left over from dredging the channel. It was also called Swan Island, named for Capt. Augustus Swan, who lived on it for many years.

The name was changed to Exchange Island when the Exchange Club of Jacksonville tried to develop the island for boating activity. The city is now trying to again create a boating destination on the island.