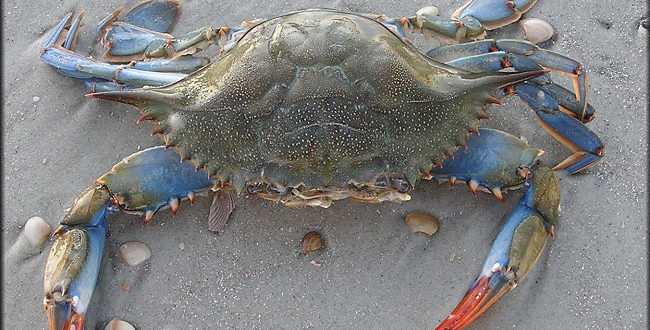 On occasions, I am asked to identify my favorite animal. This question usually comes up when I am talking to a group of elementary students and they get into what I term the superlative questions:

And so, it goes until someone asks, “What’s your favorite animal?” The answer usually surprises them when I say the Blue Crab.

The Blue Crab and I have a long and storied history, only some of which I can share here.

I grew up in Norfolk, Virginia, on the Chesapeake Bay where crab boils and oyster roasts in the fall were a way of life. My life has been intertwined with Blue Crabs for many years. After college and my time in the U.S. Army, including a tour in Vietnam, I attended the University of Virginia to get my master’s degree in biology. My thesis topic was on the neurophysiology of swimming leg musculature of the Blue Crab.

Thus, my love of crabbing made the choice of thesis topic fairly easy. I used to catch enough so that I could eat some while experimenting on others. Not a bad way to study.

If you have ever seen a Blue Crab swim, you would understand the name. The crab has five pairs of legs with one pair modified into claws. One claw is larger and heavier than the other. One is a crusher claw and one is a cutter. There are then three pairs of walking legs, which the crab can use to walk along the bottom. However, the fifth pair of legs is flattened into more of a paddle-like appendage. When the crab swims, it tucks in its leading claw, while the trailing claw acts as a rudder. The modified leading swimming leg provides upward lift while the trailing swimming leg is the propulsion. Truly a beautiful sight to watch a crab swim.

The tasty part needs no explanation.

The adult male crab has an underside with its tail-like telson that looks like the Washington Monument, whereas the female underside looks like the Capitol Rotunda. Crabs grow from microscopic larvae through a series of molts where they shed their outer shell, or carapace, before enlarging into the next stage. When crabs mate, the male will seek out a female about to do what is termed her terminal (last) molt, pick her up, carry her around until she molts, and then mates with her. You can catch these swimming doubles during the right time of the year.

A wonderful book was written by William Warner in 1976, entitled Beautiful Swimmers: Watermen, Crabs and the Chesapeake Bay, for which he won a Pulitzer Prize in 1977. Warner was a family friend, from the Eastern Shore of Virginia. Consuelo Hanks created the book’s illustrations, of which I have several original line drawings, partly because of her family connections to Jacksonville. The book discusses the life of the Blue Crab and the watermen who harvest them for a living.

If you spend much time on the St. Johns River, you will see small floats scattered along the shoreline outside the main channel. Those indicate crab traps. There is still a small but significant Blue Crab fishery in Jacksonville.

Do you think that climate change and sea level rise will impact Jacksonville in the near future?

The world has always had climate change, and sea level has risen and fallen numerous times in our geologic history. What is different today is the amount of human-related impact that we are experiencing. So, the short answer is yes, Jacksonville will be impacted by climate change and sea level rise. But exactly when and how remains to be seen.