Home » All Sections » RIVER LIFE: Eclipse lets us know that all are affected by the light, dark cycle 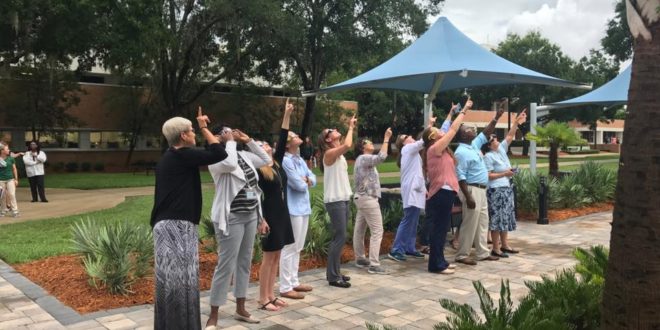 RIVER LIFE: Eclipse lets us know that all are affected by the light, dark cycle

Like most of you, I spent a lot of time Aug. 21 staring up at the sun with a very dark pair of glasses, completely mesmerized by what I was seeing. The sight was fascinating and sort of eerie at the same time.

My family had anticipated this would be a very special opportunity and went to Clemson, S.C., to observe the solar eclipse so we could experience the complete totality. It was well worth the trip.

I should add that my only grandson, now two months old, was also there. So I had some significant granddaddy cuddle time as an added bonus. My wife and others had prepared an assortment of relevant goodies to munch on, such as SunChips, Starbursts, Milky Ways, Corona beer and Eclipse gum. Who knew there was such a solar array of snacks?

As the moon slowly moved between the earth and the sun, we watched as the light gradually changed in quantity and hue. At totality, we could remove our glasses and look directly at the now darkened sun with only the corona visible. There was at first a strange quiet, followed by the cicadas’ chirping very loudly in the dark. Then it was the strange quiet as the light gradually returned.

What an amazing experience!

As I watched the eclipse unfold and observed the activity of the animals around me, I was reminded how important light is to life. Now, we all know that light from the sun is essential for plants to make oxygen and food, but few of us realize how light plays an important role for animals, too.

But the effect of the light-dark cycle that occurs as the earth rotates in relation to the sun creates a strong influence on animal behavior. Some animals are diurnal, or active in the daylight, while some are nocturnal, or active primarily at night. This behavior is driven mostly by the need to either hunt for food, or avoid being food for some predator.

This behavior is also manifested in the development of a sort of internal clock by which animals, including humans, have an innate sense of time.

This extends into the river life, too.

Some of the algae, or phytoplankton, in the river respond to the increasing light of dawn by migrating up into the water column to take advantage of the sunlight for photosynthesis. Likewise, some of the zooplankton come to the surface to feed on the microscopic plants.

In the lab, when we do a plankton tow to collect both phytoplankton and zooplankton, we can separate the zooplankton by attracting them to a strong light source.

Animals also use the timing of the light-dark cycle to time things like reproduction. In the winter, it is the increasing day length that triggers hormonal changes to start the mating cycle. By mating in late winter, the young are born in the spring as temperatures warm and food abounds.

Research at the Jacksonville University Marine Science Research Institute has found that manatees may use shortening day length to alert them to migrate to warmer waters in the south. While our water temperatures are still increasing in July and August, the longest day of the year is June 20. We see our peak number of manatees here in late June and early July. These slow-moving marine mammals need time to move south. They are using the shortening days as an early warning of colder temperatures to come.

We are all affected by the light/dark cycle, and the eclipse gave us an opportunity to witness this in a magnificent, unifying way.

Does a solar eclipse affect marine life in the river?

There is very little evidence that the fish and plankton in the river are influenced by the relative brief change in light patterns of a solar eclipse. But there are a fair amount of documented changes in behavior and activity of larger marine mammals in the ocean, notably with them coming to the surface to feed during an eclipse.