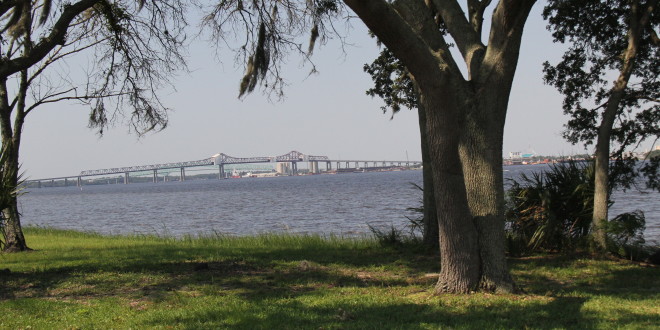 Most people in Jacksonville are familiar with watching the St. Johns River slowly flow out through downtown on its way to the Atlantic Ocean. But where does the water go after that? To the ocean, right? It turns out it really isn’t all that simple.

Ultimately, it takes a journey that will see the water sink to some of the darkest, deepest basins of the oceans, all on a round trip that can take up to 4,000 years to complete.

That means water from the St. Johns River that is now rising to the surface from the depths of the Pacific and Indian oceans left the mouth of the St. Johns about the same time the pyramids were being constructed in Egypt.

This journey starts as the discharge of the St. Johns moves into the Atlantic Ocean. It either gets entrained (flows) into the northerly moving Florida Current, which becomes the Gulf Stream when it reaches Cape Hatteras, or the water can also move south in a coastal countercurrent. This countercurrent water moves down the coastline along the eastern seaboard, eventually mixing back into the Gulf Stream around Fort Pierce.

Once our water moves up via the Gulfstream into the North Atlantic off of Iceland, Norway and Greenland, it loses heat to the atmosphere and cools. This cold, salty water is denser than the water deeper in the ocean, and so it sinks, beginning the 4,000-year tour of the deep basins of the world in a process known as thermohaline circulation.

At this point, our little packet of St. Johns water, now thoroughly mixed with other waters, becomes a mass of water known as North Atlantic Deep Water. This NADW will traverse back down the East Coast of North America and South America, and along the west coasts of Europe and Africa at a depth of more than 15,000 feet.

Eventually, this water makes its way to the surface again, upwelled in regions of the northern Indian and Pacific oceans.

So, how do we know this? Well, oceanographers use many tracers to track the movement of water masses in the ocean. These include stable and radioactive isotopes, natural salts and metals dissolved in the water, fish larvae and plankton, and even chemicals like Splenda leaking from sewer systems in the United States. They also use instruments such as buoys, boats and drifters. Benjamin Franklin made a pretty accurate map of the extent of the Gulf Stream simply using accounts and records of ships sailing back to England and Europe.

Jacksonville University students recently constructed drift buoys to deploy off the mouth of the river to track St. Johns water into the Atlantic. A satellite GPS locator on the mast of the buoy will send a position to a satellite twice a day. The batteries in the GPS should last up to eight months, giving us an excellent idea of where our water goes when it gets into the Atlantic.

Curious about its pathways? Track our buoys www.nefsc.noaa.gov/drifter/drift_jml_2014_l.html and see firsthand how connected the St. Johns River really is with the wider world.

River Life runs the last Friday of each month in The Florida Times-Union. Jeremy Stalker is an assistant professor of marine science at Jacksonville University’s Marine Science Research Institute. Email your questions about our waterways to qwhite@ju.edu. For more on the MSRI, visit ju.edu/msri.