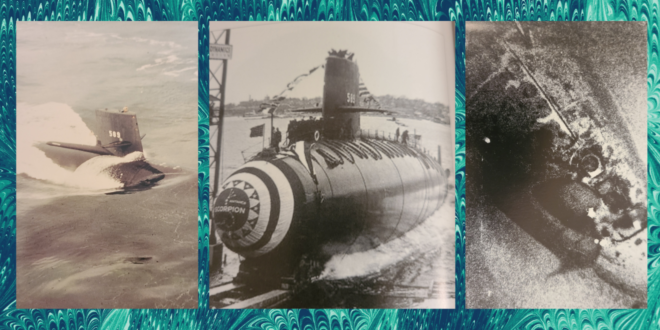 Horton’s grandfather, Chief Electronics Technician George Elmer Smith Jr., was 1 of 99 men aboard the USS Scorpion when it disappeared under unknown circumstances sometime before midnight on May 20, 1968.

The last known radio message, received by a Navy communications station in Greece and forwarded to Lt. John Roberts, involved the Scorpion’s Commander Slattery claiming that he was closing on a Soviet submarine and research group, running at 17 mph at a depth of 350 feet “to begin surveillance of the Soviets.”

A sea and air search party was launched when the Scorpion failed to return to port in Norfolk, Virginia on May 27, but nothing was found until October 1968 when the “Mizar,” a Navy oceanographic research ship, uncovered sections of the Scorpion’s hull about 400 miles southwest of the Azores archipelago 10,000 feet below the sea.

The Navy’s investigation was otherwise inconclusive, save for the sound tapes from the SOSUS listening system containing the sounds of the Scorpion’s destruction, and most documents surrounding what happened to the Scorpion and her crew remain classified.

With little support from the Navy investigation to go off of, Horton’s family and those of the other 98 crew members aboard the Scorpion have been searching for answers since their grandfathers, fathers, brothers, and husbands were presumed lost at sea.

As far back as the 1980s, Horton’s grandmother maintained correspondence with the then-current Senator Lawton Childs, and other members of the Scorpion Memorial Group continue to write to their senators and the Navy in hopes of more information.

Horton herself, however, has had the chance to advance her own arduous search here at Jacksonville University.

Through her status as a first-year marine science graduate student and student worker at the Marine Science Research Institute, Horton has been able to establish connections to two men instrumental in her search: Ballard and MSRI Executive Director, Dr. Quinton White.

Horton had the opportunity to attend the JU’s Pioneer Award event, an annual ceremony which recognizes a leader in the field of marine science whose research and dedication to life-learning has shaped advancements in the world around us. There she learned of 2017’s Pioneer Award winner, Dr. Robert Ballard, the very man whom the Navy commissioned to locate the wreckage of the USS Scorpion in 1985 in exchange for support in finding the RMS Titanic.

“I had no idea that there was any tie to Jacksonville and the Scorpion story until recently,” said Horton.

She has been able to get in contact with Ballard over email through his connections with JU, and her time working at the MSRI has produced another fruitful lead.

Horton learned through Dr. White that the research vessel “Atlantis II”, the same vessel which Ballard was aboard when he obtained the only known footage of the Scorpion’s wreckage, was docked in a shipyard closeby to the University.

The school has held events aboard the Atlantis II, so with Dr. White’s help, she plans to visit the vessel.

“This vessel is the closest anyone has been to the sub,” Horton said. “…it would mean a lot to me to see it.”

Being able to see the vessel which Ballard used to locate the wreck of the Scorpion is important to Horton, but even more important to her is sharing her grandfather’s story.

“I want the stories of him, him and my grandmother, and the submarine along with the other 98 men to live on,” Horton said. “I hope that I can continue to tell the story and the whole story of what happened so that they are never truly lost.”

If there’s anything we can learn from Horton’s quest to uncover the mystery of the USS Scorpion’s disappearance and the fate of her crew, it’s that help can come from the most unlikely of places.

After so long without answers, Horton has been able to come closer than anyone before her to learning the truth of what happened beneath the waves so many decades ago. Her time at JU has been the driving force in making those advancements, and here’s to hoping MSRI and the University can help her learn the rest of the Scorpion’s story.