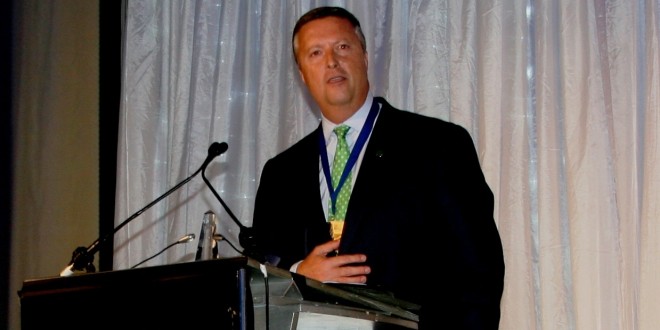 In some ways, it’s not the first line to the chorus of one of JU President Tim Cost’s favorite songs that fully captures his positive spirit. “It’s a beautiful day,“ from U2’s Beautiful Day, certainly comes close. But it’s that second line, that call to action, that seems to best embody what he unabashedly embraces: “Don’t let it get away.“

With the uplifting song’s pounding notes rattling the ballroom, Cost ascended the stage Wednesday, Nov. 18, for his induction at the Florida Council on Economic Education’s First Coast Business Hall of Fame “Lighting the Way” luncheon. The event honors the region’s most outstanding business and civic leaders while raising money to support economic and financial literacy education for area students.

Cost thanked the most important people in his life — his wife, Stephanie, daughter Melanie and son Drew — and honored mentors such as JU Chancellor Emeritus Dr. Frances Bartlett Kinne and philanthropist and former JU Board Chairman Bob Shircliff. He praised the FCEE for its goal of spreading financial literacy and economic education to young people, comparing it to JU’s mission of helping members of the next generation excel at whatever they want to be and do.

He then sought to instill a bit of his optimism and tenacity into the crowd of hundreds of local dignitaries at the Hyatt Regency Jacksonville Riverfront event, leaving them, appropriately, with a call to action: “I challenge everyone of you: please, assume positive intent on the part of other people. Let’s have a bias for positive action.”

Action has not been in short supply at Jacksonville University since Cost took the reins in early 2013. The veteran senior business executive has surrounded himself with renowned senior staff members to help him lead change that is hastening outstanding outcomes at the University, including new programs, world-renowned experts, better facilities and more partnerships.

Cost’s daughter, Melanie, Director of Financial and Media Relations at CSX in Jacksonville, gave a moving introduction of her father, eschewing a laundry list of his corporate accomplishments for a more personal description of what drives him.

“His focus on finding creative solutions and elevating those around him is so evident in the revolution he is leading at Jacksonville University,” she said. “This is not a vocation. It’s a calling. Every day he’s thinking about putting the students at the center of everything that goes on at the university, trying to figure out new ways that we as a community can create an environment so that they not only have opportunities, but thrive, and make contributions and ascend to their full potential. … And it takes his special brand of concentration, determination, dedication, and a commitment to delivering that makes that happen.”

Cost is a 1981 JU alumnus student-athlete who graduated magna cum laude, and later earned his M.B.A. in Finance and Economics from the William E. Simon Graduate School of Business at the University of Rochester. Prior to his election as JU’s president in 2013, he was Executive Vice President for food and beverage world leader PepsiCo, with revenues of $60 billion and 300,000 employees. He has 32 years of senior executive experience at many of the world’s top companies, including Bristol-Myers Squibb, Kodak, ARAMARK, Wyeth/Pfizer, Centocor/Johnson and Johnson and Pharmacia. He came back to his alma mater to ensure that its students continue to get the kind of enhanced education he received that fully prepares them to be leaders in their chosen fields.

Cost joined fellow 2015 Hall of Fame inductees Brooks Rehabilitation Chief Executive Doug Baer, Jacksonville Jaguars owner Shad Khan and FIS Executive Chairman Frank Martire. They become part of a distinguished group of individuals enshrined since its inception in 1999. They are nominated by local business peers and are only named after a rigorous final selection process by previous awardees and community leaders.

In existence for more than 30 years, the FCEE prepares Florida youths for personal and financial success through educational programs in economics, the free enterprise system and personal financial literacy. It has trained thousands of Florida teachers to teach students from kindergarten through 12th grade to be financially savvy and understand the underlying economic principles of personal financial management. More information is available at www.fcee.org.