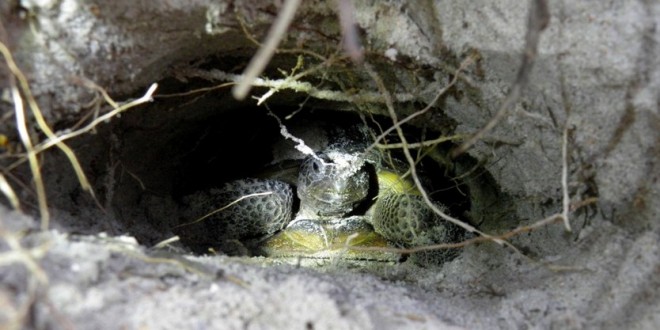 A juvenile gopher tortoise at the mouth of a burrow on Cumberland Island National Seashore.

National TV coverage given to research on threatened gopher tortoise

A JU biology professor and marine science student have gone high-tech on Cumberland Island National Seashore’s gopher tortoise, using GPS mapping along with burrow and remote game cameras to learn about the threatened species’ age, gender, eating patterns, living conditions and even the size and temperature of its burrows.

Now the months-long study by Associate Biology Professor John Enz and Marine Science sophomore Alexandria Gagne in Georgia is getting national attention, with the the popular Emmy Award-winning ABC TV program “Rock the Park” showcasing their work for its season premiere episode at 11 a.m. ET Saturday, Oct. 3, locally on WJXX TV-25. (See the program’s blog on the episode here.)

The research being done in collaboration with Dr. Dave Unger and undergraduate Thomas Moore, both of Maryville College, was partially funded through a grant from the JU Undergraduate Research Fund to Gagne, who is from Trenton, Mich. It caught the attention of the national television program, which is hosted by Jack Steward and Colton Smith and focuses on “America’s love affair with our national parks.”

“It is exciting, given all the technology and scientists out there and the year 2015, to find an unstudied population of such a unique animal and to be part of the ground-floor research of it on Cumberland Island,” Enz said. “To also be able to involve JU Undergraduate students like Alexandria in this experience is definitely the best part of the whole project for me.”

And, while the team is still analyzing the data this semester, preliminary results show more than 400 active burrows on the island, with more than 200 tortoises.

“The populations also seem to contain all age classes — reproductive adults, juveniles and hatchlings — which indicates a healthy viable population on the island,” Enz said.

The syndicated TV program’s production company reached out to Enz to film the work, which led to “a mix of excitement, nervousness, and anxiety.” However, when the film crew arrived, they made the researchers feel at ease, he said.

Watch a preview of the episode below:

Enz noted that habitat loss, urban sprawl and overexploitation have put the land-dwelling Gopher tortoise (Gopherus polyphemus) on the Threatened species list in much of the southeastern United States. Gopher tortoises are considered a “keystone” species in the Pine Savannah habitats where they like to build their burrows because of the great impact they have on this type of habitat with their burrows, which have been documented as providing shelter for more than 300 species of animals including mice, toads, lizards, frogs, burrowing owls, songbirds, snails, crayfish, numerous insects as well as snakes such as the Eastern Indigo snake, which is itself an endangered species.

“Because of gopher tortoise importance to the ecosystems where they are found, it is important to study and learn about the populations wherever it is found in order to properly protect and manage them,” he added.

An unstudied population of gopher tortoises exists on Cumberland Island, Georgia, with only anecdotal references to it being found in history books written about the island. Although protected as a National Park, Cumberland Island tortoises have not previously been scientifically studied and documented, Enz said. Therefore gopher tortoise population dynamics such as their number and gender breakdown are relatively unknown other than casual references of them from park visitors and park staff.

Gathering this baseline information such as current status, distribution, density, and impacts that may affect the became the focus of the research team’s focus.

“We used burrow cameras to look inside burrows for tortoise occupancy, and remote game cameras to measure the gopher tortoise population size, activity patterns and other animals’ burrow use on the 40-square-mile island. Additionally, data on burrow depth, dimensions and GPS locations were documented.