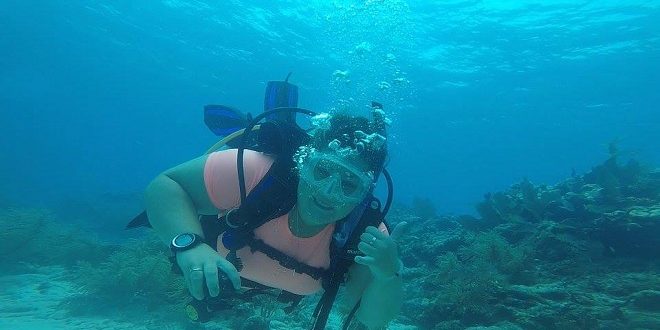 In an email to the Marine Science Research Institute (MSRI) Executive Director Dr. Quint White, graduate student Amanda Macek ’20 said: “I have great news! As of this morning, I was selected as one out of eight recipients of the Guy Harvey Ocean Foundation Scholarship for a $5,000 award. It’s going to be a great semester and I can’t wait for it to begin!”

That was late August. Today, Macek works for the St. Johns Riverkeeper in an office located inside MSRI. She is also doing a deep dive into her graduate research and exploring how anatomical changes in commercially available circle hooks affect sharks. Specifically, where sharks are hooked, injuries they tend to sustain, hook removal practices, and shark mortality related to such practices.

“Circle hooks have become popularized by commercial and recreational fisheries as they reduce bycatch, injury, deep hooking, and mortalities. However, there is a lack of research, definition, and regulation concerning circle hooks,” says Macek.

Where the Future Begins

Macek says she has always loved the ocean and her childhood dream was becoming a marine mammal trainer. Her parents took her fishing, whale watching, and to visit Sea World. “But I spent most of my life in rural Ohio where I thought I’d pursue other environmental studies.”

She says that all changed in high school during a trip to Key Largo to complete additional SCUBA certifications. She had been certified since age 12. Her senior year, her father arranged the Florida Keys visit as a birthday gift. “During one of my dives, a nurse shark came over the top of a reef and slowly swam next to me. I had seen sharks on other dives, and in aquariums, but not this close in the wild. She was within arms reach and about five feet long. She swam next to me only a few seconds, but it felt like forever. When she turned to swim off, I found myself wanting her to stay. I don’t know how else to describe it. Something clicked.”

It was what she now calls her ‘ah-ha’ moment. “When I surfaced after the dive, I told my father, ‘I’m going to study sharks. This is what I want to do with my life.’”

After graduating from Coastal Carolina University in December 2015, she worked for the Florida Fish and Wildlife Conservation Commission and the U.S. Fish and Wildlife Service. She says the experiences were very different though both required much time spent on boats and in research labs.

She was part of a native species team while with the U.S. Fish and Wildlife, focusing on endangered Lake Sturgeon, restocked populations of Lake Trout, and endangered Lake Cisco. “Our research was used to help protect and restock native fish populations to healthy levels. I had many opportunities to travel and network with other agencies, including the U.S. Geological Survey.”

With Florida Fish and Wildlife, Macek focused on all species found in the St. Johns River rather than just a few. She participated in the Fisheries Independent Monitoring Program (FIM), taking monthly samples from the River and Nassau Sound. She laughs and says, “I had to learn a lot more species names,” but expressed her eagerness to participate in the overall mission of FIM: to measure and improve environmental health.

FIM’s mission closely aligns with her desire to influence and inform policymakers.

“Ultimately, I would like to initiate change both commercially and recreationally by educating policymakers, the public, and stakeholders about better gear choices that can have a positive impact on shark management.”

As she spends the next several months preparing for the official start of her research, Macek shared what a typical day “in the field” looks like. It begins with a restless night’s sleep, she says, and then heading out around 5 a.m. Gear is organized in appropriate containers with labels, bait is cut, coolers packed, and equipment tested. Zip-ties, duct tape, and a pocket knife are on hand, tools that she calls “a field researcher’s best friends.”

Once on the water, she says the work can move quickly. “It’s important that everyone knows their job so that the entire crew can work efficiently and safely.” Gear is then deployed in the water and the waiting begins. Patience is key in science and fieldwork, she says. “It’s a good day when we catch any shark, let alone multiple, but it’s our priority to get those sharks released quickly, and in a healthy condition.”

When a shark is caught, the animal is secured with a few ropes and data is recorded–species, gender, hook location and hook type, length measurements, and any other notable environmental factors. Sometimes the sharks undergo minor surgery to implant an acoustic tag that allows for tracking its movements.

During the well-rehearsed and quick work of the team, sharks are turned upside down to induce  tonic immobility which is like a natural deep sleep. Once released, sharks heal within a week or two. The entire process takes place in under five minutes, all while carefully leaning over the side of the boat.

“At the end of a research day,” she says, “it’s all about cleaning–gear, boats, and eventually your own hands.” In addition, Macek and her team must prepare for any kind of weather. She has learned to always have a plan A and B in place, and planning is something that comes naturally to her.

After earning her Master of Science in Marine Science, she plans to pursue a Ph.D. and expand her circle hook research to include jaw morphology and feeding ecology in sharks.

“I remain open-minded about opportunities that may come my way. Ten years from now, I hope to have made some positive impact on our environment. It’s important to me to stay passionate about what I do. So far, this has been a wonderful adventure that has included accomplishing things I dreamed about as a kid.”