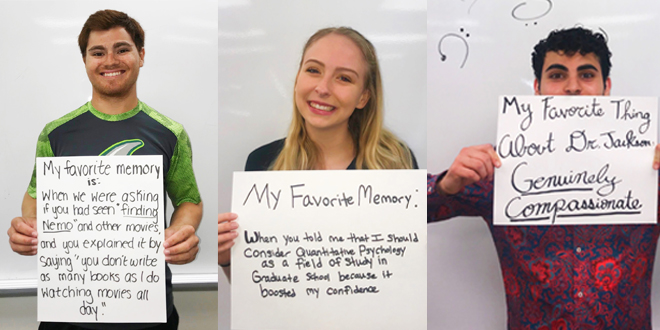 The 30-year Jacksonville University (JU) veteran first arrived on campus as a visiting professor. Today, she serves as JU’s recently appointed Vice-Provost. She says, “When I first interviewed with JU, at the age of 26, I was struck by how many women held leadership positions here.”

FROM MENTORED TO MENTORING

Originally from Massachusetts, Jackson didn’t plan to move south, attend graduate school, complete a doctoral program, and begin a meaningful, lifelong career in higher education. Very few attempted such a life trajectory. “There were no women teaching in my undergraduate classes or graduate program,” she says, but credits some significant people who have encouraged her since joining the JU community.

Of those, she names Dr. Frances Bartlett Kinne, then-president of JU; Dr. Joan Carver, then-Dean of JU’s College of Arts and Sciences; and Dr. Betty Winstead, then-Division Chair of the Social Sciences and the person who hired Jackson. “I owe a tremendous debt to Betty. But each of these women have served as incredible role models for me, and still do.”

On the evening of Aug. 30, Jackson received the prestigious Women of Influence recognition from the Jacksonville Business Journal, along with 22 other First Coast women. For more than 10 years, women like Jackson, who serve as mentors, role models, and industry leaders across northeast Florida, have been singled out for shaping the communities in which we live.

Jackson is now listed among two other JU Women of Influence: Dr. Kinne (2015), recipient of the Women of Influence Lifetime Achievement Award, and Dr. Christine Sapienza (2016), one of only three women to serve as JU’s Provost.

“I’m still shocked that I would be included with a group like this,” she says, and considers it an incredible honor. “In mid-July, I received the notification that I’d won a recognition that I didn’t even know I’d been nominated for. So, I contacted one of my students to see if she had anything to do with it.”

After 30 years in the college classroom, she has taught and mentored thousands of students, many of whom are still living and working in Jacksonville. Jackson says they keep in touch. “Easily a third of my psychology students remained local. When I think about the impact they are now having in the community, it’s rewarding.” Amazon, the Federal Reserve, CSX, the State Attorney’s Office, Fidelity, the Jacksonville Sheriff’s Office, and Florida Blue are just a few of the places where her students work and lead.

CHANGING EVEN ONE LIFE

“Sometimes I would sit outside of the Gooding building and do homework, and before Dr. Jackson would leave to go home, she’d stop and sit with me. Just to talk,” says Jenna Blyler (‘18), a former psychology student of Jackson’s. Now, Blyler works in the suite directly across from the Office of the Provost, serving as Graduate Assistant to the Vice-Provost.

She was the first person who Jackson suspected was responsible for the surprise nomination. Blyler personally handled the entire nominating process and shared the following statements in the Jacksonville Business Journal submission:

“While Dr. Jackson has undoubtedly earned the esteem of her colleagues, she holds an untainted reputation and undying relationship with her students for encouraging honesty, inspiring diligence, and channeling understanding in humility and grace. She has characterized leadership in the most dear and lasting of manners. She has the confidence to stand alone, the resolution and patience for weighty decisions, and the compassion to listen to the needs of others.”

Blyler’s journey is an inspiring one and she credits much of that to Jackson’s influence in her life. She says, “At Jacksonville University, where the mission is to be like a family, Dr. Jackson embodies the home.”

And home is not a concept that Blyler takes lightly. “Dr. Jackson has given me a sense of belonging and a sense of hope, not only through my relationship with her, but most importantly within myself. Like a mother who makes sure to leave the kitchen light on so you don’t stumble in the dark, she has been a place of stability, instruction, and abiding care.”

According to Blyler, nominating Jackson wasn’t about her Doctorate in Psychology, authoring four books, recognition as JU’s Woman of the Year (2005) and Professor of the Year (2004), or receiving nine other awards in excellence, education, and service. For Blyler, the nomination was more about the woman who exemplifies the oft repeated mantra sitting on the bookshelf in Jackson’s office.

THE BEST FIT FOR JU

Her doctoral studies and areas of expertise center on experimental and cognitive psychology. Dr. Jackson says that her passion for serving and observing others is of great benefit in her position as Vice-Provost. In this new role, she provides oversight in Experiential Learning, the Center for Teaching and Learning, the Adult Degree Program, the Honors program, Undergraduate Research, and Jacksonville University’s recent partnership with the Sant’Anna Institute in Sorrento, Italy.

Her appointment coincided with other leadership transitions at the University. In a campus-wide communication, University President Tim Cost expressed his enthusiasm about the dynamic and energized leadership team now in place.

Jackson says, “In the Office of the Provost, we’re thinking about what’s the best fit for JU. Naturally, I’m interested in data and making sure decisions are based on sound numbers in addition to being innovative and creative.”

Though she has stepped away from a full classroom schedule, her influence continues. She has not stopped listening to the needs of students.