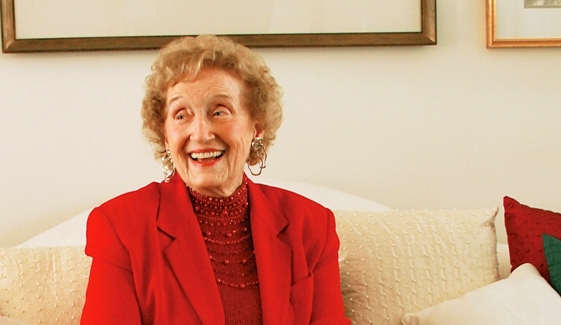 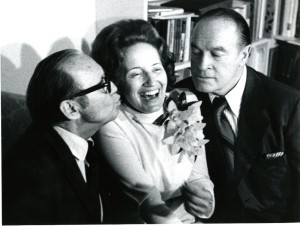 “Life isn’t about me, it’s about others” is a favorite quote she uses to explain how she lives her life.

Her nomination for the Jacksonville Business Journal award is below.

Past President and Chancellor Emeritus

Dr. Kinne’s career accomplishments have been recognized nationally and internationally over the long span of her adult life and before.

The daughter of a newspaper publisher and librarian, she taught piano, music and even served as a public school orchestra conductor before completing college. She went on to earn Bachelors and Master’s degrees in Music Education from Drake University. While her late husband was serving in Germany after the war, she became the first American woman to earn a Doctorate from Johann Wolfgang Goethe Universitat. That degree was awarded Cum Laude, with a triple major in Music, English Literature and Philosophy. In addition, five universities have subsequently honored her with Honorary Doctoral Degrees: Lenoir-Rhyne University, Drake University, Wagner College, Flagler College and Jacksonville University. 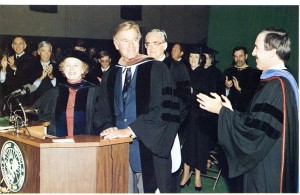 Prior to joining Jacksonville University in 1958 as a Professor of Humanities, she served as a World War II Army Hostess, eventually becoming the Director of three clubs. She later served as a College Professor at Tsudo College in Tokyo, Japan, and created volunteer post-war educational programs for Japanese students in Tokyo.

Her doctoral dissertation has been published in both German and English. Her autobiography “Iowa Girl: The President Wears a Skirt” is in its second printing. Forewords were written in each case by distinguished friends who came under the influence of her engaging personality. Forewords in the first printing were written by Bob Hope, Winston S. Churchill and Charlton Heston. Steve Forbes provided it for the second printing. Other prominent visitors to campus at her personal invitation included such diverse celebrities as Arthur Fiedler, Billy Graham, Linus Pauling and both “Dear Abby” and Ann Landers. Successfully getting Bob Hope and Jack Benny to appear together on the campus at JU (their only such joint appearance) led to the publication of one of the chapters in the book “How I Made the Greatest Sale that Did the Most for Me: Fifty Great Sales Stories.” Bob Hope, one of her closest friends, recognized her critical eye in the art of entertainment. It became routine for him to call her after each of his television specials to solicit her critical opinion. 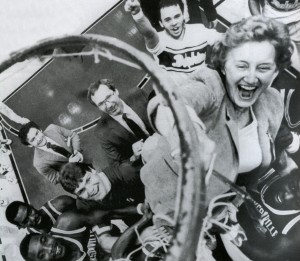 She is listed in over 25 Who’s Who and similar publications from Who’s Who in Florida, to Who’s Who in the World, Two Thousand Women of Achievement, Community Leaders in America, Notable Americans, the Directory of American Scholars, and even Personalities of the South.

Recognizing her accomplishments and continuing contributions, six facilities have been named in her honor:

The Frances Bartlett Kinne Auditorium at The Mayo Clinic, Jacksonville

The North Wing of the Bertha Bartlett Public Library (named for her mother), Story City, Iowa

Dr. Kinne’s considerable abilities and dedicated work ethic resulted in her being the first woman to break through the “glass ceiling” in many arenas, academic and otherwise. Of note however is the myriad of examples of outstanding accomplishments while being “the first woman” in those leadership roles. Her demonstration of effective leadership in those roles continues to open doors for effective women in academe, the corporate world and the political world to this day.

Her “firsts” include the following:

The first woman president of a Florida University

The first woman member of the Jacksonville Rotary Club, the first club in Florida

The first woman President of the Jacksonville Rotary Club

The first woman member of the River Club of Jacksonville

As an example of her leadership, during her 10 years as President of Jacksonville University (1979-89), new programs were established in the Colleges of Fine Arts and Arts and Sciences, and The Executive MBA Program, the Baccalaureate Nursing Program, and the Aviation Program were started. Her university presidential colleagues elected her as Chair of The Independent Colleges and Universities of Florida for two years during her tenure as President of JU. In that role she organized and led the efforts of the state’s independent universities in state and national legislative efforts.

Dr. Kinne continues active service to Jacksonville University as Chancellor Emeritus. While at some universities that is nothing but a ceremonial or honorary title, that has never been the case at JU. She continues to be a valued contributor at meetings of many committees and task forces, both at the Board of Trustee governance level and at the working management levels of the University. She also continues to be an active member of the Board of Trustees at Drake University, where she earned both her Bachelor and Masters Degrees. She is regularly seen at events on the Jacksonville University campus, whether she has some official function to perform, or just to watch a Fine Arts performance or athletic event.

She continues to counsel and inspire hundreds of former students as well as academic and corporate leaders who keep her phone and email server busy on a daily basis. Many academic leaders from around the nation still regard her as a knowledgeable advisor on confidential management issues.

Her advice is not only sought from within the academic industry, but she is also a trusted confidant of many of this region’s leading corporate executives and elected political officials. They know they can count on her broad experience, her absolute candor and her maintaining confidentiality.

Although she has reduced the number of motivational and inspirational speaking engagements she accepts from across the country, it is noteworthy that she again spoke this spring at Jacksonville University’s Commencement. Having celebrated her 98th birthday just a few weeks before, and speaking without notes for an appropriate five or six minutes, she delivered an organized and highly effective, poignant inspirational message. The hundreds of graduates were held spellbound, as were the thousands of friends, relatives and honored guests also in attendance.

Dr. Kinne accomplishes what few 98-year-olds are able to do: she effectively transmits the noteworthy personal and professional successes of an amazing lifetime into a humble and joyful message of encouragement. Her message is not only delivered through her words, but through the example she continues to live of joyful service, servant leadership and optimism.