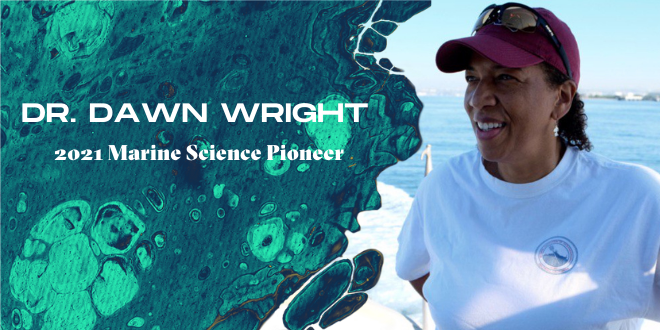 Each year the Institute selects a forerunner in the field of marine science whose research and dedication to life-learning has shaped and inspired advancements in the world around us. Past winners have included deep sea archeologist Bob Ballard, who is most famously known for the discoveries of the wreck of the RMS Titanic in 1985; Chris Fischer, founder of OCEARCH and expedition leader on shark tracking and apex predators; and Edie Widder, co-founder of the Ocean Research and Conservation Association and the first researcher to film Giant Squid.

Wright played a critical role in creating the first geographic information system data model for ocean and coastal science, resulting from the challenges in applying GIS to deep marine environments. “A few years after the deep-sea vehicle Argo I was used to discover the wreck of the RMS Titanic in 1985, I was presented with some of the first GIS data sets collected with that vehicle,” said Wright.

Since then, Wright has been committed to mapping the deep sea – earning the nickname “Deep Sea Dawn.” She has also completed oceanographic fieldwork in some of the most geologically active regions on the planet, including the East Pacific Rise, the Mid-Atlantic Ridge, the Juan de Fuca Ridge, the Tonga Trench, volcanoes under the Japan Sea and the Indian Ocean, and American Samoa. In 1991 she became the first Black female to dive to the deep ocean floor in a research submersible.

Wright is currently Chief Scientist of the Environmental Systems Research Institute, which is a world-leading geographic information system software and data science company that deeply believes both geoanalytics and education are at the heart of a more resilient and sustainable future. Wright is also Professor of Geography and Oceanography in the College of Earth, Ocean, and Atmospheric Sciences at Oregon State University.

“As professor of geography and oceanography, she co-edited one of the first books on marine GIS, and as Chief Scientist of ESRI, she has been an innovator in incorporating remotely sensed earth observation data into the GIS environment and utilizing this imagery to understand how our planet operates,” says Jacksonville University Professor of Geography Dr. Ray Oldakowski.

Wright’s contributions to coastal science resonate particularly with students at Jacksonville University, which is home to northeast Florida’s first and largest academic program in Geography and GIS. Dr. Oldakowski is particularly excited to recognize Dr. Wright with the 2021 MSRI Pioneer Award.

“Dawn is most definitely a role model for young scientists in all fields,” says Dr. Oldakowski. “Her recognition by the JU MSRI joins numerous other prestigious awards that Dawn has earned including membership in the National Academy of Sciences, and designation as an Oregon Professor of the Year, and a Fellow of the American Association for the Advancement of Science.”