Home » All Sections » Jay Myztroh of Stono Echo on Heritage, Equality and Education 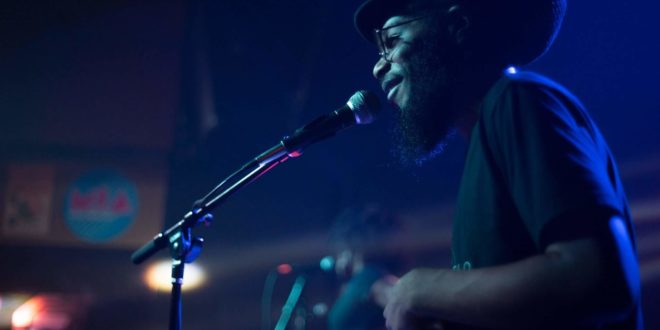 Jay Myztroh of Stono Echo on Heritage, Equality and Education

WAVE Magazine staff sat down with Jacksonville University (JU) Alumnus Jeremy McKinnies to catch up on life since earning his Bachelor of Music in Composition and Theory. Better known to regional audiences as Jay Myztroh of the duo Stono Echo, McKinnies shared his heart for education, equality, and music.

Q: Beyond performing, rehearsing, and recording with Stono Echo, what fills your day?

McKinnies: My creative and professional worlds are seamlessly woven together at the moment. I lead the NFC Singers for the Northeast Florida Conservatory, which is a community youth chorus performing intermediate to advanced music in the Mandarin area. I also direct a small training choir at Christ the King Catholic Church, provide private piano and voice lessons to 30 students, and act as Associate Director and Conductor of the newly formed Ritz Voices Children’s Chorus. They’re performing for the “We Shall Overcome” show at the Ritz Theatre and Museum on February 23, in honor of Black History Month. The show starts at 7:30 pm. Anyone is welcome. My kids range from third to ninth grade. It’s a big mix, but they’re such talented children. I do expect a lot out of them.

Q: Tell us more about the event on Feb. 23. That’s part of the Ritz celebration of Black History Month, right?

M: Yeah, and the Ritz Voice Elite, the older students, will also perform. My group will have about a ten-minute set. We’ll delve into some spirituals and a song I composed. The text comes from James Weldon Johnson—obviously a local hero, civil rights activist, and author—our section of the program is really themed around him. The poem “The Gift to Sing” has been arranged for choir before, but we’re taking an acapella approach.

Q: Any particular works by Johnson that spoke to you on a personal level?

M: One of my favorite books is Autobiography of an Ex-Colored Man. I love how it explores the theme of being a person who can pass for a white person and finding out that you’re “colored” and what it means, and how that changes his whole outlook. This dual-consciousness exists. He’s telling the story as an adult man giving you a secret. When he writes that he’s happy about the progress already happening in the Black community—maybe 50 years from emancipation, or perceived emancipation. That shows me that this idea of “progress” is very subjective. So, while things are much different than what they were, we have to look at the context of now, and realize there are still a lot of pressures and difficulties. For African Americans, those pressures may not always be blatant, but read between the lines. It’s hard to really describe living it every day. The percentage of Black people in any given place and being in that number. Or looks that you sometimes get. Or other times, when people don’t look at you or smile, as they might with other strangers. How should you perceive that? Is this person just having a bad day or is it something else?

Q: You mentioned the subjectiveness of progress and how equality is a moving goal. Do you see this play out in the music industry?

M: Hm, there might be a little bit of that, yeah. I’m in conducting, right, and I very seldom see conductor’s that are African-American; outside of gospel choirs and things like that, or historically Black schools. For example, you might see me and I’m not the most clean-cut African American with the short hair and polished face. I look more like Bob Marley than Barack Obama. But I know for certain that hasn’t closed any doors for me so far. Mostly because of the resume I’ve built and the work I present. However, where there is disproportionate representation there is usually something behind the veil. Something that keeps people thinking that way. How much access do these children have to music education? How much access do they have to what’s considered Western fine art? Writing something on paper and having your ideas still exist a hundred years from now, that’s what I couldn’t get growing up in school. Inequality in the commercial music industry is more obvious when you think about the heads of the major record labels, publishers, and the history of the Grammys.

Q: What composers most inspired your passion to pursue composition?

M: Debussy comes to mind, and Chopin as well. The more I studied, I saw this theme occurring. Composers would get their inspiration from much older music. Sometimes the cultural folk music of their own regions. That inspired me to stop looking so negatively at my own cultural music history, of gospel looking and lined hymns in the Pentecostal/Baptist tradition. So, they’d have a deacon, or maybe a bishop, leading with a scripture and everyone kind of knows the outlines of those melodies. He would basically speak a line of text and then the whole congregation would sing it back in that lined method. It was absolutely call and response. This is always in the recesses of my mind and stems from some of my earliest church experiences. And those five notes of the pentatonic scale informs blues, jazz and rock-n-roll. In my formal compositions and in my vocal stylings with Stono Echo, I embrace these melodic and expressive roots of my musical heritage.

Q: For those who aren’t familiar, describe the latest from Stono Echo and who you are as a group.

M: Yeah, we’re a soul/hip-hop duo, with me as vocalist/songwriter and Paten Locke as producer. We released the album “Black Diamonds” last year on the “Full Plate” record label. It’s available on Vinyl and all streaming services. All our media, including videos, are available at www.StonoEcho.com. The release brought the attention of Pat Healy at Berklee College of Music Online. Stono Echo was featured on their podcast “The Roaring Crowd Fund.”

Q: Tell us how you landed at JU. What drew you?

M: JU appeared on my radar thanks to a friend who was attending at the time. The Summer of 2012 marked eight years removed from college, for me, and I wanted to complete the liberal arts degree I’d started. More than anything, I wanted to study composition and Chris told me that JU offered a major in Theory and Composition. That was it for me and I was enrolled by that fall.

Q: Describe an unforgettable moment during your campus experience.

M: My favorite JU moment was senior recital. It was truly a synthesis of all that I’d learned. The whole process took me way out of my comfort zone, too. I had to create and rehearse various ensembles—an SATB choir, string quartet, and woodwind quintet. It was a treasure to have the talent of the JU music community at my fingertips. Students and faculty helped, and it was a dream come true to publicly present my own compositions.

Q: You mentioned faculty being helpful and impactful. Who, specifically, influenced your life and work, maybe as a friend and mentor as well as a professor?

M: I would be remiss not to mention Dr. Jianjun He and Dr. William Schirmer. Both mentored me in composition and overall musicianship on a weekly basis. They taught me how to listen intently. But Dr. Timothy Snyder immediately comes to mind. I was his Assistant Conductor for JU’s choir’s. It was like receiving a daily master class in conducting and choral direction. So much of what I do now working with choirs reflects what I learned from him. He once told me, “You are a teacher,” and that was well before I’d embraced that truth about myself.

Q: Dream big with readers for a moment and share something you hope the future holds.

M: I plan to develop a performance arts center, one large enough to house a theatre, rehearsal and practice rooms, recording studio, etc. A fine arts academy in a location that provides professional training to communities that otherwise would never have this kind of educational access.