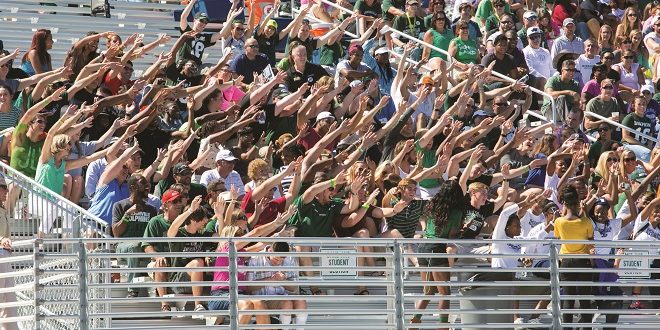 The Jacksonville University (JU) Office of Alumni Programs will honor recipients of the Class of 2018 JU Distinguished Alumni Awards during halftime of the Homecoming and Family Weekend football game Saturday, October 13.

Jacksonville litigation attorney Mike Freed ’90 was recently recognized as the 2018 Lawyer of the Year by the Jacksonville Daily Record and Jacksonville Bar Association.

In 2017, Freed launched #FreedToRun, running six marathons in six days to benefit Jacksonville Area Legal Aid. The inaugural event raised nearly $70,000, beyond the original project goal. #FreedToRun is now in its second year and will be held in December.

Mike Freed has served JU with his time, talent, and treasure. He is a former member of the Alumni Board of Governors, was integral in establishing the Dolphin Lawyers network, and is a past recipient of the Fran Kinne Award. He and his wife Crystal have been faithful supporters of JU Dolphins through the establishment of the Crystal and Michael Freed Scholarship Fund, a significant component of the University’s $120M ASPIRE Campaign.

Dolphin Sweethearts Leonard ’67 and Frances ’68 (McLaughlin) Giarraputo currently live in New York, but have remained loyal fans and longtime supporters of their alma mater. The Giarraputos returned to campus this past April to celebrate Fran’s 50th Class Reunion.

Leonard “Len” Giarraputo, a member of the men’s crew team, graduated with a Bachelor of Science in business administration in 1967. Len is now the Senior Vice President of Investments at North Shore Wealth Management specializing in equities, options, and commodities. His experience in wealth management spans nearly 40 years. Additionally, he is also a Coast Guard licensed captain and instrument rated pilot.

Frances (McLaughlin) Giarraputo, a member of JU’s cheer squad, graduated from JU in 1968 with a degree in elementary education. The couple now resides in Woodbury, New York with two children. Their son, Christopher, is a 1992 JU graduate with a degree in business administration.

Stephen Flynn graduated with a Bachelor of Arts degree in management from JU in 2011. During his tenure at JU, Flynn was an avid intramural athlete, a member of the JU Student Alliance, president of the Phi Delta Theta fraternity, and was a representative on the InterFraternity Council. After graduation, he served as a member of the Career Resource Center Advisory Board. As a Talent Acquisition Manager, he shared his knowledge and talents with JU students, alumni, faculty and staff to assist in network building.

Additionally, Flynn was a founding member of the GOLD Phin Committee and Society, JU’s leadership council and giving society for graduates of the last decade. In the Jacksonville community, Stephen and his wife Amanda volunteered and supported the Friends of Jacksonville Animals, Animal Care and Protective Services, and WJXT-Channel 4’s Pet Project.

Stephen passed away unexpectedly earlier this year and his loss deeply felt by all who knew him. Amanda, along with his parents Nancy and Steve Flynn, have worked together to continue honoring his memory at JU. In 2018 alone, more than $3,300 has been raised for the JU Scholarship Fund in Stephen’s memory. His family will accept this award on his behalf.

Prior to receiving her Master of Fine Arts in 2016, Tawan Harrell Chester served as Petty Officer Third Class in the U.S. Navy. Her analytical work led to valuable critical thinking skills which shaped her strong personal commitment to veterans handling the repercussions of military service.

Chester has volunteered at the Jacksonville Veterans Center for more than three years. The center specializes in adjustment counseling and reintegration into civilian life. Her volunteerism focuses on art therapy for veterans in the Jacksonville area.

Some of her personal art creations are made from re-purposed military uniform material and her mixed-media pieces incorporate shirt backs, buttons, boots, palette scrapings, and military badges. Chester’s work, whether as a volunteer or for her personal portfolio, is a way of honoring veterans, she says. WAVE magazine sat down with Chester in 2017 to discuss her work and art in depth.

Mike Mitchell, Director of Military and Veterans Resource Center at Jacksonville University, assists prospective and current veteran students with admission, transition, academic success, and student involvement. A former student at Jacksonville University, he arrived on campus as a retired Navy veteran, later graduating with a Bachelor of Arts in Business Management.

Currently, you may also find him coordinating JU’s “Green Zone,” a program to help JU students, faculty, and staff better understand the student experience for students affiliated with the military. In addition, Mitchell is an active member of the JU GOLD Phin society. He also volunteers for many campus activities, including Commencement, Charter Day, and Senior Stroll.

For complete lists of previous award recipients, visit the Jacksonville University Office of Alumni Programs online. Framed photographs of all winners reside in the River House.