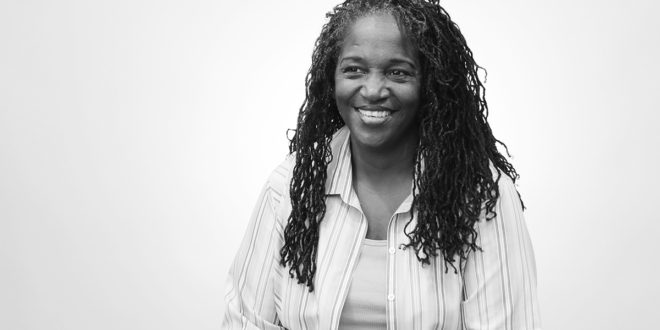 Her thesis in the MFA Visual Arts program at Jacksonville University dealt with art therapy, but Tawan Harrell Chester is quick to admit that while she’s helping other veterans, she’s also found healing for herself.

“It really hit home for me because I had a stepfather, uncle, brother and cousins—a lot of people before me—who were military,” she said.

Her responsibility as Petty Officer Third Class during those four years in the U.S. Navy involved analysis, and it left behind valuable critical thinking skills that led to her strong personal commitment to veterans handling the repercussions of military service.

Chester has volunteered at the Jacksonville Veterans Center for more than two years, serving six to seven veterans in her weekly class session. The center is different from others in Northeast Florida in that it specializes in adjustment counseling and reintegration into civilian life.

“The No. 1 issue on the table with vets is PTSD,” Chester says, “whether it’s from time in the field, in combat, or from sexual trauma.”

The gamut of emotional issues—anger, depression or anxiety—runs wide and grows more acute during the holiday season and winter, she added.

Because Chester isn’t a trained psychologist or counselor, the center always provides such a person during art therapy sessions with her students, some of whom drive multiple times a week from the far reaches of Duval and Clay counties to the center in downtown Jacksonville. She explores drawing skills, acrylic painting, printmaking and developing series of images with her students.

“It’s really making such great progress. I didn’t realize it was helping so much,” she says. 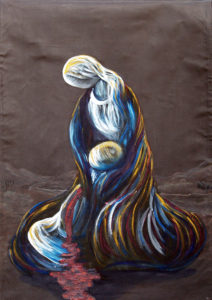 Chester noted that her students show up faithfully every week and get “really bent out of shape” when other center events conflict with her regularly scheduled art classes. Most importantly, the center’s counselors have indicated to her that many of her students are progressing through their individual counseling sessions at such a rate that they may not require the length of therapy originally anticipated.

Born and raised in Jacksonville Chester spent her childhood around the corner from JU, on a stretch of Arlington Expressway where a warehouse now sits in place of her childhood home.

As a youngster, the most she attempted in the realm of visual art was picking up a pencil every now and then to draw or doodle. She attended Arlington Elementary School, Kirby-Smith Middle and Raines High School. She played basketball and ran track for a while, but ultimately wanted something that was a true, cognitive challenge for her.

While at Raines, she studied vocational drafting and set her heart on one day becoming an architect. That was the closest she ever came to fine art.

Until after her re-entry into civilian life and starting an undergraduate degree, she had no formal training in design, painting or composition. She later earned an associate’s degree at Florida State College at Jacksonville, a BFA at the University of North Florida, and her MFA at JU.

“I’ve now been to just about every college in Jacksonville, and I felt the program here at JU really helped fill in the gaps of my earlier arts education,” she said.

Her MFA experience was the natural capstone to a journey she said she feels she’s been on for many years.

“Low-residency was different for me,” she says, because being a resident of Jacksonville enabled her to pop in on instructors even during the low-residency portion of the MFA.

“The program was really compact, cramming all of this information into a small space of time. I made sure my schedule was clear, so it wasn’t that hard for me. My kids are grown. I was only six miles away, the studios were open, and I was here.”

And in that season of high production and immersion, some very defining images began to take shape: a gloved hand holding a washed-out version of a ceremonial flag, a chess piece sewn amid stars and stripes, crumpled figures, broken canteens, sputtering torches, American flags unraveled and ravaged, a woman cradling a fallen, bleeding figure in a sweep of bold lines.

“Veterans have encountered so many high-pressure things in the military, and other difficult circumstances, that college, by comparison, is a cake-walk. There’s no danger here. It’s simply challenging you in a different way,” she says. “I would tell any veteran, ‘Get your degree.’”

Tawan disagrees with those who say returning to college is like starting all over again.

“Most vets think they’re too old, or they think about their past high school experiences, but college isn’t like that,” she says.

Not only that, but getting a degree can cost less than prospective students might think. Though freedom is never free, a college degree can be.

She encourages veterans, active-duty military, spouses and dependents to take full advantage of whatever eligibility they may have under the Post 9/11 GI Bill, the Yellow Ribbon program or other assistance programs available.

Chester’s work, whether as a volunteer or for her personal portfolio, is a way of honoring veterans, she says. She saves every little label, button, texture and piece of material, and then works it back into a piece of art.

Re-purposed uniform material is one of her favorite mediums, and she’s often found shopping at the Army/Navy Surplus store, yard sales and other thrift stores. Shirt backs make nice canvases, and her mixed-media ventures incorporate everything from handmade paper to magazine cut-outs, palette scrapings and military badges.

She adds that she loves oils, but never uses them around her veteran students in the event the paint fumes trigger a bad memory or episode. Printmaking is another favorite.

“I love mixed media. I used to fight it, but I’ve found that if I just go with the mark-making that’s happening, it’s much better than what I originally envisioned.”

Some of her work is larger than 18” X 24”, some is rather small, and some pieces are unconventional in their presentation. Like the two sea bags.

“When you join the military, they provide a sea bag, and you have to make all of your belongings fit inside,” Chester said. “Your whole life in one bag. These—when I came across them and saw the wear-and-tear, all the holes, I couldn’t pass them up.”

Two standard-issue military sea bags of rough cotton canvas in army-green became the backdrop for two painted figure studies. When it comes time to display them, like during her MFA exhibit at JU’s Alexander Brest Gallery, she literally stuffs them full and tosses them onto the gallery floor. The faces are nebulous portrayals of actual homeless veterans that she encountered on the streets of Jacksonville and in New York City.

A man reclining on a bench is completely covered, even his face. A younger woman is tucked into the recess of a doorway in a long line of businesses closed for the night. She’s hiding under a heap of blankets, a fire hydrant in the foreground.

“Vets have a hard time reuniting with family sometimes,” she says. The sea bag portraying the young woman, like every bag issued by the U.S. military, is stamped with the service member’s first and middle initials, last name, and Social Security number. Now the numbers are mostly faded. The letters, however, are easily read, although Chester missed them entirely until the woman’s body had taken shape within her composition.

“T.L. Harrell” is stamped across the olive-colored surface, and reading it for the first time was an emotional yet confirming moment for Chester. Her maiden name is Harrell, and it was the name that identified her between 1986 and during her first year of service in the U.S. Navy.

While she and her family have been fortunate during her re-entry into civilian life and her husband’s transition after a 30-year military service career, many others are not.

For this reason among many others, she hopes one day to expand the art therapy program at the Jacksonville Veterans Center. In fact, the center recently gained a new marriage and family counseling component, in addition to a long list of services for area veterans, and is now better equipped to invite family members into the therapy process.

That could potentially double Chester’s class size in future.

“It hasn’t happened yet,” she says, “but we’re definitely looking at the possibility of including spouses and significant others.”

And if that expansion happens, Chester will employ one of her characteristic encouragements, refusing to take no for an answer.

It seemed to work for her, discovering a passion for creating art later in her life’s journey, and she fully agrees with the sentiment that Jacksonville University, now her alma mater, did far more than just award her a degree. It helped her cultivate a lifelong passion.