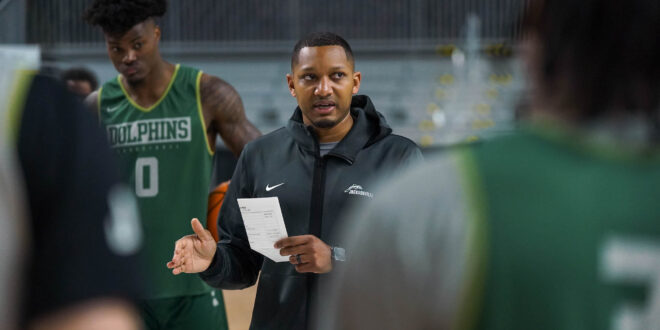 First season of Mincy era shows promise for the future

From the very start of the 2021-22 college basketball season, this year’s Jacksonville University men’s basketball team seemed primed to add itself to the list of elite teams in school history. Following the previous year’s 11-13 season that saw the Dolphins fail to make the ASUN conference tournament, Jordan Mincy was brought in to be the head coach following six seasons as an assistant at the University of Florida.

In just one season, Mincy turned the program around, earning the first 20-win season for the Phins since the 2010-11 campaign. He also helped guide Jacksonville to its first unbeaten home season since 1972-73, going a perfect 15-0 at Swisher Gymnasium (one of just 15 NCAA Division I teams to be unblemished at home this season). Their hopes for an ASUN championship and a berth in the 2022 NCAA Tournament fell just short Tuesday night with a 77-72 loss to Bellarmine in the conference final.

“This team fought incredibly hard this season and they should hold their heads high for what they have been able to accomplish together,” said Jacksonville University Athletic Director Alex Ricker-Gilbert. “Everyone at JU is proud of Coach Mincy, our staff, and our young men. We know this is just the beginning of a very exciting era for Jacksonville University men’s basketball.”

The Dolphins season started out a pedestrian 4-3 through seven games with tough losses at UCF, Minnesota, and Georgia. However, one thing was clear- this was a different team from previous years. They would battle their opponents for a full 40 minutes, never quitting and always fighting until the final buzzer. It was a reflection of their first-year coach in Mincy, who was ranked as the top assistant coach in the country in ESPN’s 2020 “40 under 40”, an exclusive list of the top head and assistant coaches in the country under the age of 40.

Eventually the Dolphins hit their stride, going 7-1 in games over the span of a month between the end of 2021 and beginning of the new year. After a few setback losses on the road, Jacksonville returned to its winning ways and won eight of the final 10 games to close the regular season.

Throughout the season, defense was the calling card for JU, as the Phins led the ASUN in points allowed per game (58.7), field goal defense (39.3%) and three-point defense (28.8%). Additionally, playing the Dolphins at Swisher Gymnasium proved to be a futile task, as every opponent was sent home disappointed, and with their ears ringing from the “Phinatics” student section.

Every home game was an event, and none more thrilling than during the “River City Rumble” between JU and North Florida on Feb. 23. In front of a sold out Swisher Gym, the Dolphins pummeled their cross town rival, 71-39, and held them to just 1-21 shooting from three-point range. A message was sent that night – this team was meant to be taken seriously.

Historically, this years’ program ranks among the best in school history. The team won 20 games for just the 10th time since 1957 and for the first time since 2010-11. Additionally, it was the first 21-win season for the Phins since 1986, while Mincy finished with the second-most wins for any first-year head coach in Division I this year.

The future is bright for the team, as many key pieces are set to return next year. Coach Mincy and his staff will look to build upon their first-year success and make another run in the Fall of 2022. For all updates and news regarding the Jacksonville University Men’s Basketball program, head over to judolphins.com.