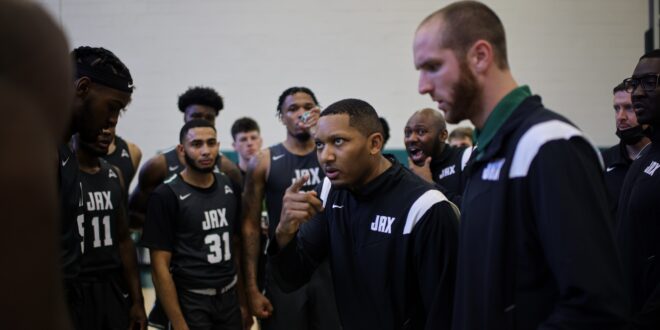 A new era in men’s basketball

As they continue with conference play this week, the Jacksonville University men’s basketball program is off to a strong 9-4 start this season, including wins in five out of its last six contests. First-year head coach Jordan Mincy was brought in to return the program to its winning ways, and more importantly, usher in a new era and culture among the team and fans. In 2020, Mincy was ranked as the top assistant coach in the country in ESPN’s “40 under 40”, an exclusive list of the top head and assistant coaches in the country under the age of 40. In just a few months since his arrival on campus, Mincy has lived up to that ranking, and brought in a new energy to the program.

”I feel like the culture Coach (Mincy) has brought is a family-based culture with everyone on the same page to reach one ultimate goal, which is to win together,” said Gyasi Powell, a redshirt-freshman guard and Jacksonville native. “The energy he brings to us is intense because he cares about winning and that is great to have in our culture. We try to keep high energy in order to keep it a winning one.”

“Coach Mincy brings a mentality of toughness and physicality. He has preached that all year and will continue to instill that into the program,” said Thomas Owen, redshirt-junior guard. “We are always going to be the tougher, more physical team night in and night out. He also talks about the “TRUE” mentality. Which is Trust the process, Relentless work approach, United, Every detail matters. That is what Coach Mincy stands for and that is the type of culture he is building here.”

It should come as no surprise to everyone on campus that the Dolphins are also an unblemished 6-0 at Swisher Gymnasium this year, thanks in part to a new pregame tradition, and a revamped student section.

“When many of us think back to our own college experiences, athletics events are often woven throughout those memories: tailgates, student sections, chants, and other time-honored traditions,” said Senior Associate Athletic Director, Laura Der Hopkins. “Leading into this school year, our department and campus partners sought to answer the question – how can we continue to make Jacksonville Athletics a driver of the total student experience here on our campus?”

Party in the Plaza

The biggest change to pregame festivities has been the emergence of “Party at the Plaza”, a 90-minute pregame event located outside of the Kinne University Center that’s designed to cultivate Dolphin pride and build a strong fan community around the basketball program. The pre-game event consists of a live DJ, beer garden, and several food trucks, along with games like cornhole and spikeball. The idea was to give students a reason to get pumped for the game in a fun, social setting before going into Swisher Gymnasium to cheer on the Dolphins. So far, students and staff say it’s a success.

Anders Scola ‘23 thinks having the new location at the Plaza right next to Swisher is a huge selling point to get people out.

“I really enjoy the DJ and food trucks, and the location is great right next to the gym, so we can go right from that to the game,” said Scola. “With no football anymore, basketball is the big event on campus, so it’s great to see people going to the games.”

“We knew our home Men’s Basketball games could serve as a prime opportunity for hosting some of these new traditions like Party at the Plaza,” said Der Hopkins. “We blast music, offer unique dining choices with local food trucks and affordable beverage promotions in the beer garden, and we always let students give us feedback on what else would add to their environment.”

“A big aspect of being in college is going to sporting events and supporting your fellow students”, says Stephen Turner ‘23. “I really like being able to come out and grab some food and drinks with everyone before the game.”

Members of the men’s basketball team are also taking notice of the Party in the Plaza, and think it only helps them during the games.

“I think the party at the plaza is a good thing for the students to go have fun and chill before our game, and then bring all that energy to make the atmosphere dangerous to play in,” said Powell. “I feel like if they show up to that event, then they are fired up and ready for the game.

Owen said, “I love the idea of the Party in the Plaza. The more we can get the student body to interact with the basketball team the better. Having them in Swisher gives us energy and a big advantage for us, especially during conference play.”

Upon his arrival from the University of Florida where he was an assistant coach for six seasons, Coach Mincy said one of the first things he wanted to do was create a culture with the student fanbase at Jacksonville University. More specifically, Coach Mincy wants to make Swisher Gym the toughest place to play in the Atlantic Sun Conference.

One way the Dolphins are achieving that is through the creation of a high-energy student section called Phinatics. Several students were hand-selected as Phinatics section leaders whose job is to bring a large group of friends and keep them pumped up throughout the game.

Mincy knows all-too-well just how impactful a raucous crowd can be in keeping his players energized, and also rattling opponents.

“It’s just an unbelievable environment, how packed it is, how loud it gets,” said Mincy. “We look forward to experiencing that environment day in and day out, night in and night out.”

Through the Dolphins’ first six home games, one thing is clear: opponents are in for an extremely loud environment inside of Swisher. Much like Duke’s Cameron Indoor Stadium, you’ll find that everything and everyone is right on top of you during the game. There is less than 20 feet of space from the stands to the court, making the cheers and screams of the Phinatics that much more intimidating.

“Having a packed and loud student section makes Swisher dangerous for every team that comes to play us,” Powell said. “Then, it just boosts up JU’s energy on the court when the students are into the games. It is definitely an advantage.”

“That cranked up atmosphere infuses incredible energy into its centralized campus location,” Der Hopkins said. “By tip-off, our students are ready to get Swisher Gym rocking throughout the game.”

“I am very excited about the team’s start this year,” said Owen. “We are playing well and competing at a high level. Our goal this year is to win the regular-season conference championship and then go on and win the conference tournament.”

Conference play in the Atlantic Sun will begin Jan. 8, as Jacksonville hosts Florida Gulf Coast at 6:00 p.m., inside of Swisher Gym. Coach Mincy and his team are rounding into form at the right time, holding opponents to just 51.2 points per game in their last five outings (JU has the second-best scoring defense in all of Division I at just 55.1 points per game allowed).

For information on the men’s basketball schedule, as well as where you can purchase your tickets, head over to judolphins.com.