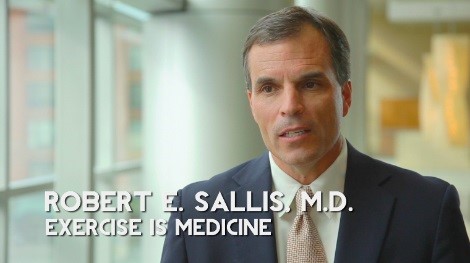 Dr. Robert Sallis, chairman of the global Exercise is Medicine initiative, is the Brooks Rehabilitation College of Healthcare Sciences Distinguished Lecturer from 5 to 6:30 p.m. Monday, April 11, in Terry Concert Hall. The event is open to the public.

The event is in conjunction with Jacksonville University Charter Week, as well as the University being awarded Bronze Level status as an Exercise Is Medicine (EIM) Campus. Only 72 campuses in the U.S. have the designation, and only two of those are in Florida (JU and Florida Gulf Coast University).

Dr. Sallis will discuss exercise and the provocative initiative he advocates in which doctors are advised that not prescribing exercise to treat patients is neglectful, even to the point malpractice.

Physical inactivity has a wide array of harmful health effects, and the association between an inactive and unfit way of life persists in virtually every subgroup of the population.  On the other hand, physical activity is like a powerful drug, useful for both the treatment and prevention of virtually every chronic disease.

As the costs associated with diseases directly caused by a sedentary lifestyle have soared, it is clear that physical inactivity is the major public health problem of our time. Enter Exercise is Medicine, described as a cure for the plague of the 21st century

Advocates of the initiative argue: “It’s time for our health care providers to start prescribing exercise as a drug. In fact, regular exercise is likely the single best prescription people of all ages could take for a huge host of health benefits. Simple stated, exercise is medicine. Exercise is a wonder drug. If it was listed in the Physician’s Desk Reference (the largest compendium of drugs), it would be the most powerful drug currently available. And it would be malpractice not to prescribe it.”

It can be easier to prescribe a pill or surgery instead of exercise, fitness experts say. According to researchers at the Mayo Clinic and Olmsted Medical Center, almost 70 percent of Americans take at least one prescription drug – costing the U.S. $374 billion in 2014.

Dr. Robert Sallis is a family physician practicing at Kaiser Permanente Medical Center in Fontana, California, where he serves as Co-Director of their Sports Medicine Fellowship program.  He is a Clinical Professor of Family Medicine at the University of California, Riverside (UCR) School of Medicine.

He is a Past-President of the American College of Sports Medicine (ACSM) and currently chairs Exercise is Medicine™, a joint initiative of ACSM and the American Medical Association.  He also chaired the Healthcare Sector of the U.S. Physical Activity Plan and is the physician spokesperson for the “Every Body Walk!” campaign.

Dr. Sallis received his Bachelor of Science degree from the U.S. Air Force Academy (where he played intercollegiate basketball) and his Medical Degree from Texas A&M University.  He completed his residency in Family Medicine at Kaiser Permanente Medical Center in Fontana, CA, where he served as chief resident.