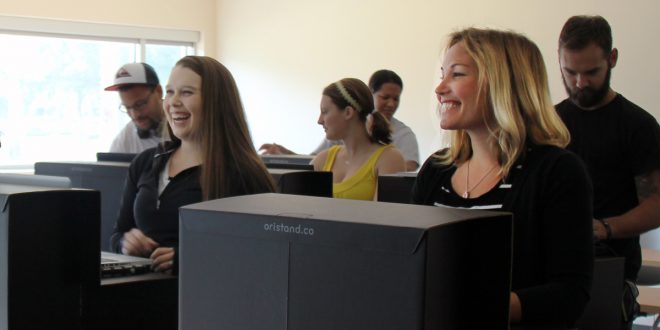 One of the most important ways to be job-ready, either as a new college graduate or as a seasoned employee looking for a career change, is to be physically and mentally fit, ready to answer recruitment questions or handle new work tasks with skill and creativity.

Researchers are discovering that a key way to ensure that is to reduce sedentary time. After all, it can be easy to sometimes forget just how much inactivity occurs at work or in school, sitting in cubicles, offices or classrooms and not moving about.

Time spent sitting correlates with a risk of mortality and chronic disease, new studies show. In contrast, more time not sitting – that is, standing – can improve health outcomes and even worker productivity.

To get at the benefits more clearly, faculty and students from a variety of disciplines at Jacksonville University are conducting a research study to assess the impact that standing has on students’ health: physical (Kinesiology); mental (Mental Health Counseling); neurocognitive (Nursing); and academic performance and classroom behavior (Education).

To do that, they’ve brought in Oristand “standing desks,” which will be used by students during classroom lecture time, in order to determine just how beneficial they are.

The goal is to find a strategy to reduce sedentary time for college students who spend about eight to nine hours a day sitting.

The project is part of “Collaborate JU,” a program developed through JU’s Florida EPIC (Entrepreneurism, Policy, Innovation and Commerce) Program. In Collaborate JU, students and professors from multiple disciplines have joined forces with industry experts to solve challenging problems, all with the goal of helping students become actively engaged in their educations and be better prepared for the workforce.

A similar university study released this spring found that the desks improved productivity significantly. Over a six-month period at a Texas call center, employees using stand-capable desks were more productive than those using conventional desks. In fact, their productivity grew over time — the stand-capable group had 23 percent more successful calls than their seated colleagues in their first month, and 53 percent more successful calls after six months.

For the JU study, student researchers in Nursing, Mental Health Counseling and Kinesiology will develop and conduct physical and mental health assessments throughout the semester.

“The data will be analyzed to determine whether standing at desks reduces students’ level of stress; increases their focus, memory and productivity; and affects their quality of life,” said Dr. Heather Hausenblas, lead researcher and professor in the JU Kinesiology Department who publishes on the psychology of sedentary behavior.

In particular, the researchers will analyze the impact standing had on students receiving accommodations for Americans with Disabilities Act physical or mental disabilities.

“This study aligns with the goals of Collaborate JU to produce students who are more qualified upon graduation and have the knowledge and skills to be job-ready,” said Terri Davlantes, executive director of the EPIC program. “If students are more focused in the classroom they will better retain instruction.”

University students represent a high-risk group for sedentary behavior. Often, newly found independence allows college students to make decisions and choices that were previously made for them by their parents, JU researchers say. Studies show that when college students have free time, they are most likely being sedentary.

“Because university students spend a large portion of their week in lecture, it provides an ideal environment to intervene to get this special population to stand more,” Dr. Hausenblas said. “Emerging research is revealing that standing desks may result in reduced sitting time and improved health outcomes in young children and middle-aged adults. Unfortunately, no research has examined the health effects of standing desks with university students.”

This article originally appeared in the July 3, 2016, edition of The Florida Times-Union. To learn more about the Florida EPIC Program and Collaborate JU, visit www.ju.edu/collaborate.