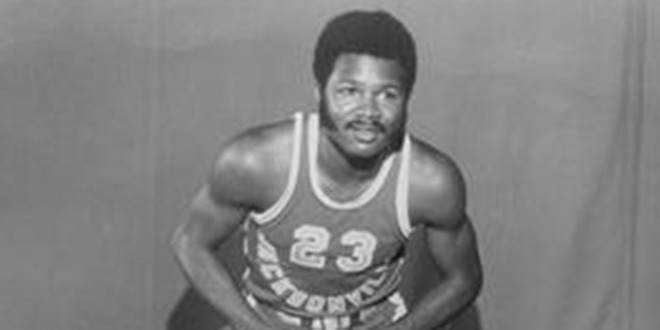 Dolphins near and far are mourning the passing of men’s basketball legend Ernie Fleming, 67, who died Feb. 28 in Dallas after a battle with cancer. He was honored at a Celebration of Life today at Hope Chapel Ministries in Northwest Jacksonville, where he was buried.

“Ernie Fleming was a very popular guy,” said former Head Men’s Basketball Coach Tom Wasdin. “He was one of the nicest guys I’ve ever coached, and one of the best people I ever met. He was a real pleasure to have around. If all people were like Ernie, I would probably still be coaching.”

Mr. Fleming was a prolific scorer for the Dolphins. He recorded 59 points in a game against St. Peter’s, the most any Dolphin has ever scored. He is one of only five people ever to score 1,000 points in just two season. Mr. Fleming scored 682 points in the 1971-72 season, the third-most scored by a JU athlete in a single season. His career 20.6 ppg ranks fifth on the all-time list.

“Ernie was one of the best players I ever coached, and probably one of the most important players to ever be a Dolphin,” continued Wasdin. “Without him, we may never have recruited Artis Gilmore here. They played together at Gardner-Webb, and Ernie wrote me a letter saying he wanted to transfer here. The letter also said that he wanted to bring his friend with him, and that this friend just happened to be 7′ 2″ Artis Gilmore.”

Mr. Fleming is the second member of the famed 1970-71 team that played against UCLA in the NCAA Championship game to die this year, following the passing of Rex Morgan on Jan. 15. He was also an integral part of the 1971-72 team that played in the NIT semi-finals. He was named a Helms Foundation All-American (’72), and was drafted by the Detroit Pistons but did not make the final preseason cut.

In an article in The Herald News, Gilmore credited Mr. Fleming with helping him adjust to a non-segregated environment. Mr. Fleming also taught him simple life skills. Gilmore said he never wore a shirt-and-tie combination until college, and it was Mr. Fleming who taught him to tie the knot.

“He was light years ahead of me,” Gilmore told the newspaper.  “Ernie was a very unique individual. He was one of the best friends I ever had because I just learned so much from him.”

After college, Mr. Fleming was a successful businessman, according to The Herald News of Fall River, Mass., where he attended Durfee High School and led the Hilltoppers to the 1966 Division 1 state championship. He struggled with his health over the last decade of his life after suffering strokes.

A physical education major who earned a Bachelor of Arts degree, Mr. Fleming valued his education at Jacksonville University, his family said at his induction to the JU Hall of Fame on April 30, 2011.

“I have so many memories of him talking about being a student here and playing basketball, and that was a way for him to get a good education,” said his daughter Erica. “Basketball was important, but getting an education and getting a degree was probably No. 1.”

Son Ernest Fleming Jr. fondly remembered stories from his father about his college days, many of which came back to his education.

“My father was a great basketball player, but he was a greater man,” he said at the Hall of Fame induction. “He talked a lot about JU. He used to talk about how he’d wake up and run to class every day because of how much he wanted to graduate.”

Mr. Fleming is survived by his children, Erica (Christopher) Bartley and Ernest Fleming Jr.; granddaughter; Ciara Bartley; sister, Carol Jenkins; and a host of other relatives and friends. For more on Mr. Fleming or to offer condolences, click here.

This article contains material from JU Athletics and The (Fall River) Herald News.