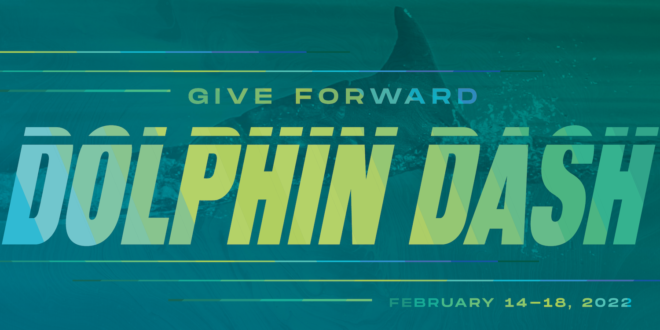 For the second year in a row, Jacksonville University shattered records and goals during Dolphin Dash, its annual one-week giving challenge. In just five days, from Feb. 14 to Feb. 18, 7,336 Dolphins from around the world came together to Give Forward and invest more than $3,120,000 in the areas of campus that impacted them the most.

With a goal of 6,000 donors and $2.5 million in total gifts, JU students, families, faculty, staff, alumni, and friends came together to power progress as the Dolphin community surpassed the records set in 2021 when 6,399 donors gave $2,423,977 during the five days of giving.

Jacksonville University President Tim Cost ’81 and his wife, Stephanie, supported every challenge, team, and student organization competing in Dolphin Dash with a gift of $140,000. Their generous investment brought the university over the $2,000,000 mark and included support for JU’s Greatest Needs, the Class of 2022 giving campaign, and a number of future initiatives. A late Friday afternoon surge powered Dolphin Dash to reach the $3 million mark, while another push in the final three hours helped Jacksonville University eclipse 7,000 donors.

“We’re blown away by the support of the community during Dolphin Dash- especially from our Trustees, students, alumni, and employees,” said Lauren Griffith, the Senior Director of University Advancement at Jacksonville University. “Our students truly do fuel the campaign through their creative social media content and grassroots fundraising to help their team or organization win.”

After a Trustee challenge was announced to students to hit 750 donors, more than 770 students donated to the campaign, unlocking three, $10,000 scholarships from the Board of Trustees.

“Dolphin Dash is about coming together as a whole for our students and we are so grateful to the Board of Trustees for unlocking three $10,000 scholarships,” Griffith stated.

Athletics Challenge
4,695 student-athletes, alumni, parents, and Dolphin fans supported the Athletics Challenge. Lacrosse swept the top spots, as the women’s program took home the $5,000 prize for most donors with 1,010, while the men’s team ended the week with the most dollars raised at $98,727. The head coach of every Jacksonville Athletics team made a gift to support their student-athletes, and in total, $669,862 was raised for the Jacksonville University athletic teams.

College Challenge
In the College Challenge, it was a tight race for most donors between the Davis College of Business and the College of Arts and Sciences. On the final day, Davis College pulled away and finished with 140 donors, claiming the $10,000 reward. They also won an additional $5,000 for the Barnes & Noble Alumni Fast Start Challenge by having the most alumni donors by midnight on February 14. For most dollars, the Brooks Rehabilitation College of Healthcare Sciences defended its’ title from 2021, raising more than $440,126 to earn the $10,000 prize for the college.

Greek Challenge
It was a wire-to-wire win for Alpha Delta Pi in the Greek Challenge, as they defeated Alpha Kappa Alpha and Alpha Epsilon Phi for most donors and most dollars, respectively. This earned the chapter both of the $2,000 prizes, as they shattered their 2021 mark of $11,134 raised with a whopping $15,726 this year.

Jax Recwell Challenge
In another new challenge for this year’s Dolphin Dash, Women’s Soccer and Club Tennis shined in the competition for Jacksonville University Club Sports. Women’s Soccer reached 97 donors to win the $1,500 prize, while Club Tennis earned a hard-fought win (and also $1,500) with $2,255 raised. In total, $18,862 was given to the Jax RecWell Challenge by 182 donors.

The 24 members of Jacksonville University’s Board of Trustees participated in Dolphin Dash at a record rate, contributing nearly $1 million for our students and programs and providing critical challenge funding during the campaign.

Alumni also participated in the campaign at record rates. More than 1,200 graduates made a gift, almost doubling Jacksonville’s alumni participation from 2021. Alumni support not only makes an immediate impact on campus but helps the university climb the U.S. News and World Report rankings.

While the rest of the year is about giving back, Dolphin Dash is about powering forward, with donors challenging donors to invest in Jacksonville University. The continued success of Dolphin Dash serves as a reminder to all JU students, families, faculty, staff, alumni, and friends of what is possible when everyone comes together to Give Forward.