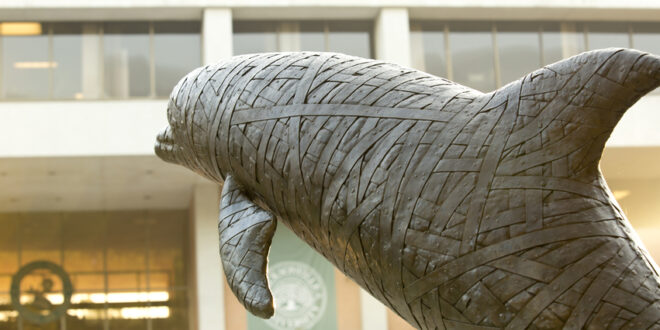 For the third year in a row, Jacksonville University secured its place among the top 25 percent of regional universities on U.S. News & World Report’s list of Best Colleges, a prestigious annual ranking of the best colleges and universities throughout the country. This year the university also earned national recognition for its flagship programs in nursing and business, its ethnically diverse student body, and the value of its premier academic programs.

“Celebrating Jacksonville University’s third consecutive year in the top tier of a highly competitive group of regional universities is an extraordinary feat when you consider just four years ago we were working to break into the top 50,” said Jacksonville University President Tim Cost. “Since I returned to my alma mater nine years ago to become its president, we’ve been intensely focused on propelling this university upward to reach its greatest potential. Though more work lies ahead in our continued climb, we can be proud of the collective work of our talented faculty, staff and administrative leaders, who all play a vital role in this university’s success.”

Of an expanded list of 137 universities, Jacksonville University ranked 31st overall on the list of Best Regional Universities (South), marking three consecutive years of the highest rankings in the university’s 87-year history.

“The list of Best Undergraduate Nursing Programs is based solely on the judgments of deans and senior faculty members of nursing schools all over the U.S.,” said Dr. Will Miller, executive director of institutional analytics, effectiveness and strategic planning. “JU’s recognition on this list is a testament to the quality of our Keigwin School of Nursing, which is highly regarded among its peers as a leader in nursing education and training.”

Jacksonville University has strategically invested in its world-class healthcare programs, including nursing, and has expanded highly specialized, market-responsive degree offerings within its Brooks Rehabilitation College of Healthcare Sciences. The university now offers an accelerated 12-month Bachelor of Nursing degree, alongside its 16-month accelerated degree and traditional undergraduate nursing program.

Jacksonville University has also invested significantly in the globally ranked programs within its Davis College of Business, which U.S. News & World Report named one of the Best Business Programs in the country once again this year. JU was also named among the Best Value Schools in the South based on academic quality, costs, and the percentage of students receiving need-based scholarships or financial aid. Only seven other schools in Florida were ranked on this list.

New this year: U.S. News & World Report named Jacksonville University one of the most ethnically diverse campuses in the nation, using an index which measures the probability that any two randomly-selected people on campus are from different races or ethnic groups.

“Two out of every ten students on our campus identify as African American, which is a major contributor to our ethnic diversity at Jacksonville University,” said Senior Vice President and Chief Culture Officer Dr. Allana Forte. “Furthermore, U.S. News & World Report does not factor international students into their index, which is another thriving cohort at JU. Collectively, this creates a diverse, culturally rich campus environment that helps prepare students for, and is reflective of, the global marketplace.”

Jacksonville University’s strong score on the ethnic diversity index aligns with the university’s ongoing investment in cultivating a more inclusive and equitable campus. In the past year, the university named a Chief Culture Officer, established ​​the Jacksonville University Special Task Force on Inclusion, Culture and Equity, introduced the first Provost fellow working directly on diversity, equity, and inclusion in the curriculum, and hosted several listening sessions between minority students and senior leaders of the university to drive strategic decisions in this critical area.