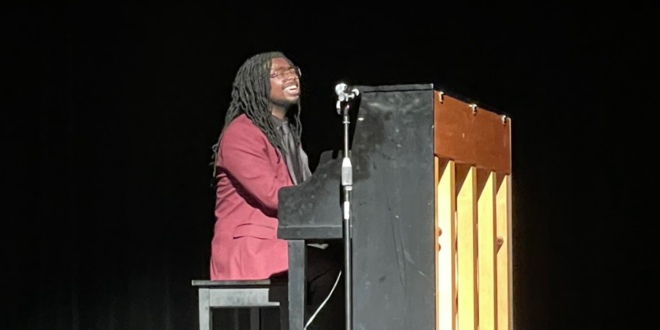 With 2022’s Black History Month behind us, we can look back and see that Jacksonville University did its part in uplifting Black voices due in no small part to the Black History Month Concert and Art Gallery and their organizer, freshman Sommer Kinsler.

The art gallery ran for the second half of Black History Month at Swisher Theater, combining with the concert at Swisher Theater on Friday, Feb. 25 to form a showcase of the Black experience through the talents of over a dozen JU students.

Before the art gallery and concert could form that showcase, however, they started as anything else does: an idea.

The art gallery featured photography, paintings, and digital art, while the concert featured performances in dance, the spoken word, and song.

Jamarian Williams, a JU freshman, lent his voice to the concert through a spoken word performance titled “An Apology from Oppression.” With his performance, he wanted to leave the audience with the realization that while anyone can be oppressed, we must acknowledge that some are more oppressed than others.

“[The concert] was a great opportunity to showcase talents and works of Black culture, and I felt I could put in on the cause,” he said.  “I enjoyed all of the performances and seeing the hard work put into making each performance a true work of art.”

James Demps, a JU senior and Infinitus member, showed his vocal and piano skills during performances of “Ordinary People” by John Legend and “A Change is Gonna Come” by Sam Cooke.

“I wanted the audience to feel hopeful,” he said, “and that we can bring positive change to the world even though we as people have been through so much.”

Keeping the event open to submissions from all students was important to Kinsler as she organized the events. The driving goal behind her work was to create a celebration of the Black experience that could be enjoyed whether or not someone lives it on a daily basis.

“Of course, I wanted to highlight black artists,” she said, “But I wanted to feature artists who weren’t Black, to help drive home the idea that anyone can and should appreciate the Black experience.”

Kinsler’s vision was realized on the night of the concert, when Swisher Theater was packed with a larger-than-expected audience full of a wide array of students from all different backgrounds. Their claps and cheers rang out even louder than the instruments between performances, and turned the event from a showcase to a true celebration.

“This performance really showed everything that black history is about,” said sophomore Owen Skelton after the show. “Just being there, watching them perform, seeing what they’re all about: that’s what it’s all about.”

Swisher Theater lobby felt charged with excitement after the concert as audience members echoed similar sentiments, and it was clear that Kinsler succeeded in creating an enjoyable event for students of all backgrounds.

Given the success of the events, Kinsler is already looking to the future for other opportunities to celebrate the Black experience, whether it be another concert or something entirely new.

If her future endeavors are anything like the Black History Month Concert and Art Gallery, they’ll be must-attend events for anyone looking to experience a true representation of the Black experience.