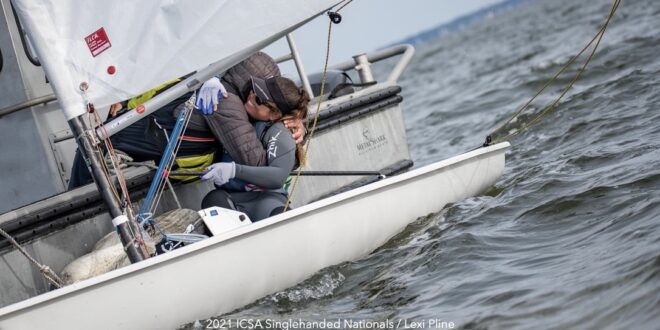 Grit – it’s the single-minded pursuit of a dream, the ability to dig deep when the chips are down, the sheer display of will and the inner resolve to achieve. It’s also exactly what Charlotte Rose exhibited during her second College Sailing Women’s Singlehanded National Championship win.

A regatta consisting of 14 individual races over the course of two consecutive days, the competition is held every year in November. Scoring is based on placement with one point awarded for first place, two for second and so on.

The goal is to collect as few points as possible, and that was Rose’s plan as she arrived in Annapolis, Md., as the reigning champion in the singlehanded discipline. She was there to sail her Laser Radial through the blue waters of the Chesapeake Bay, to slice through the current and master the wind. The bay was waiting for her to defend her title.

“I just went out there and was like, ‘Okay, I’m going to do everything I can that’s in my control to have a good race,” Rose recalled, and over the course of the next eight races, she built a commanding lead.

In a devastating turn of events, Rose’s lead evaporated when a minor rules infraction disqualified her from race No. 1, adding 18 points to her score. The penalty was the result of a protest mounted against her at the end of the first day.

Upon receiving the news, her first question was for Jacksonville University head sailing coach Jon Faudree. “Can I still win?”

His answer was honest and swift. Rose would need to win every race left, a feat that, by all accounts, would be incredibly difficult and unlikely.

“This was the only way this story could go,” Faudree recalled. “You know, at this level and with that boat, there’s not a whole lot I can do to help her be faster, so the mental part, overcoming adversity is something we’ve been working on. It’s something that I could help her with as her coach.”

There were six races left on day two. Her fellow competitors had no idea what they were about to witness.

In a performance that can only be described as dominant, Rose tore through the course, picking off boats one by one, winning the first four races in decisive fashion. In her fifth race, however, she faltered.

“I didn’t have a good start, a good first upwind or downwind, and so I was like eighth or ninth in the fleet, but on the last downwind leg, I gained all those boats back.”

And as she did, she left everyone in attendance aghast. Faudree called her effort “unheard of.”

Rose would finish second in that race and the next. Her closest competitor, however, had slipped back far enough by this point to leave the door open for Rose to capture her second Women’s Singlehanded National Championship, the final one of her college career.

Rose will graduate in the spring. At her last advisory appointment, she was informed that she had satisfied the requirements for her kinesiology degree. She is now completing her psychology minor, and for the first time, it’s dawning on her that her collegiate sailing career is drawing to a close.

Jacksonville University has been a happy home for Rose. She hadn’t originally planned to attend a smaller school, but that decision has made all the difference.

“I’m so glad I decided to come here,” she admitted. “JU has given me a family away my family,  not just the team and Jon, but the university itself. My professors have helped me so much. President Cost knows me and has been so supportive. I’m sad to be leaving, but I know that no matter what I’m going to do in my life, they’ll always be there. JU will always be a part of my life.”

After graduation, Rose plans to devote herself to her Olympic campaign, an effort that involves fundraising to cover the cost of the competitions, equipment and training that will be necessary for her to compete in the 2024 Olympics in Paris.

She is already working on a website that will help supporters track her progress. And among those supporters will be her Dolphin family — the faculty, staff, teammates and coach who have had a front-row seat to her successes and to her growth as a student-athlete.

“I’m so excited to watch her go on and pursue her Olympic career and to watch that develop over the years,” Faudree said. “When she’s in Paris, when she’s at the games, I’ll be there watching. I hope to be a part of all of the journeys ahead. I’ll always be a phone call or a text away, and I’ll always be there to tell her ‘you can do it,” because I know she can.”

UPDATE: Shortly after this article was written, Rose won a silver medal in the Junior Pan American Games in Cali, Columbia. The games feature 39 different sports and are for athletes from the Americas aged 18 to 23. This inaugural event was held Dec. 2 to 4, 2021. For more information about Charlotte, her Olympic campaign, and the Jacksonville University Sailing program, please contact: Jon Faudree at jfaudre@ju.edu.