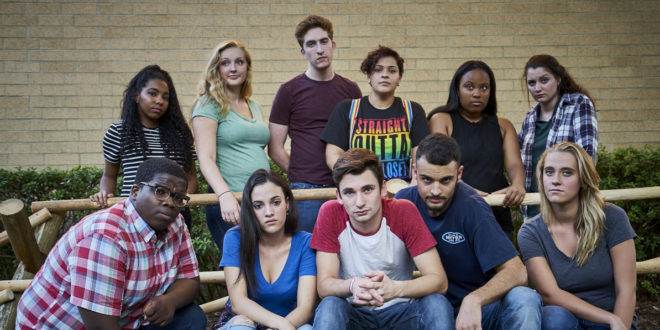 Two plays based on watershed LGBT-related events, one a tragedy that took place on a dusty plain in Wyoming and the other a victory that sprung from a courtroom in California, are running back to back at Jacksonville University with the goal of prompting dialogue on campus and in the community.

“The Laramie Project,” about the 1998 beating and death of Matthew Shepard in Laramie, Wyo., will be performed at   (NOTE: Due to Hurricane Matthew, “Laramie” has been rescheduled to 7:30 p.m. Oct. 20, 21 and 22) in Swisher Theater. “8,” about the proceedings in the 2010 landmark case challenging the anti-same sex marriage Proposition 8 in California, runs at 7 p.m. Oct. 17, also in Swisher Theater.

“These productions don’t shy away from societal issues about gay rights and deep prejudices,” said College of Fine Arts Dean Dr. Henry Rinne. “Art forces us to look at ourselves and who we are, and to address issues of great importance, whether it’s about senseless violence and bullying, or about our republic being ruled by law and not just a vote of the majority.”

For “The Laramie Project” by Moisés Kaufman and members of Tectonic Theater Project, the play’s originators conducted 200 interviews with people from the small town to complete the script. The play, called “nothing short of stunning” by New York Magazine and “astonishing” by Time Magazine, chronicles life in Laramie in the year after the murder, revealing the lowest depths of hatred and greatest heights of compassion in human beings.

Associate Professor of Theater Deborah Jordan is directing the production, with set design by Brandon Lettow, lighting by Katelyn Hall and costumes by Curtis J. Williams III. Fifteen actors play dozens of roles, having to transition from characters such as a 40-year-old gay man to a tough-as-nails police sergeant who finds the perpetrator. “I wanted to do something socially relevant, and the people who have come forth to take part in it is a testament to how this resonates with our community right now,” she said. “It’s very emotional for the students in a lot of ways. There’s an incredible desire to honor the material and to do their very best to bring these characters to life.”

With The Pulse shooting in Orlando that killed 50 this summer, the clash over the Human Rights Ordinance in Jacksonville and the current disharmony in the political climate, the play has cut close to home for a lot of students, Jordan said.

“It’s not just about gays and lesbians but all the marginalized population. Although Matthew Shepherd was murdered and it was considered a hate crime, I think hate crimes go beyond just that,” she said. “They speak to the level of hate and prejudice in our country, how much it has even reared its ugly head in this election.”

Beyond the challenging subject matter, the pair of plays also offer a package that artistically gives JU students two very different experiences, Rinne said. While “The Laramie Project” is a traditionally staged student production with weeks of lead time, “8” is a staged readers’ theater-style event using students, local professionals and equity actors from the Hippodrome Acting Company in Gainesville. Even prominent local attorneys and judges will read parts in the play. For “8,” Artist-In-Residence and professional TV actor Erik DeCicco is the on-site coordinator, and the production is being directed by Bob Robins. The play, described as “raw drama” and “stunning” in reviews, was written by Academy-award winning screenwriter Dustin Lance Black (Milk, J. Edgar) and focuses on the trial in which it was ruled unconstitutional to ban same-sex marriage in California.

“8” is written as a verbatim reenactment using transcripts from the trial, journalist records and media interviews from plaintiffs, defendants and proponents involved. This event is a benefit for Southern Legal Counsel, and a panel discussion on current LGBT issues will follow the show.

“What you forget is that these are the actual words that were said, the actual closing arguments,” DeCicco said. “This isn’t some scenario like the Broadway play ‘Hamilton’; this is real people using real words. It’s not a dramatization. And the kids are really rising to the challenge. We’re not doing ‘Oklahoma’ this semester, that’s for sure.”