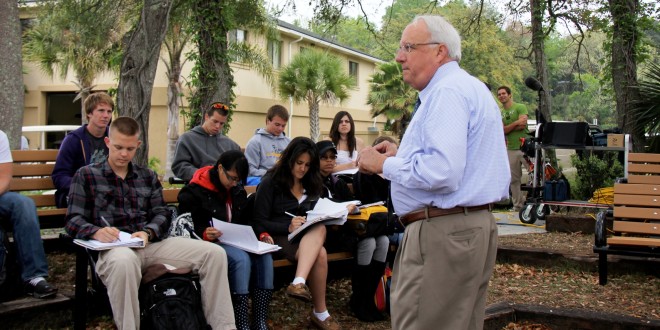 As a child growing up near the Elizabeth River system in Norfolk, Va., Quinton White saw firsthand how neglecting or harming the environment can directly shape the quality of a person’s life.

“We kids would go down to the mudflats area near the edge of the water — but that’s where we were told to stop because it was polluted,” he said. “Then I’d go home, and there’d be my mom, shaking her head as she shook the soot off our laundry that had landed there from the nearby coal-fired generating plant. 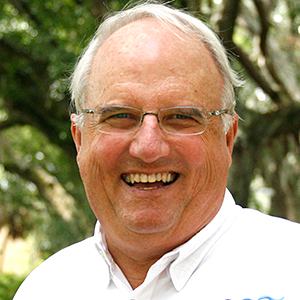 “Here I was 8 or 9 years old, and I was already becoming aware of my surroundings … it was an interesting kind of experience as a kid, and it really began to shape my impression of what’s good and what’s bad as far as paying attention to the environment.”

Pay attention he has. The marine science professor, who is executive director of Jacksonville University’s Marine Science Research Institute, has spent the better part of nearly four decades championing the St. Johns River and educating people about the value of natural resources. In the process, he’s become a firm patriarch and gentle uniter, working both with those who have interests in developing the river and those who have concerns about protecting it.

For his efforts, White is the winner of the prestigious 2014 Christi P. Veleta Environmental Award, given annually by the City of Jacksonville’s Environmental Protection Board to an individual who has shown long-term environmental stewardship, exhibited superior environmental initiative and consistently promoted environmental education and outreach. It will be presented Aug. 15 at the annual EPB Symposium.

At Jacksonville University and as part of the community, White has worked tirelessly to promote awareness of environmental and marine life issues.

“I consider Christi Veleta a very dear friend, and it’s especially significant to me to win an award named after her,” he said. “She worked for decades on environmental issues for the city, and you could always count on her to give it her all. So this is a very great honor.”

White exemplifies the excellence and dedication of JU’s faculty, particularly because of his ability to gain results through persistence and collaboration, said JU Provost/Chief Academic Officer Dr. Wenying Xu.

“I am thrilled with Dr. White’s EPB award, as it’sa testament to his remarkable ability in bringing together many great minds with diverse expertise and viewpoints to produce concrete results,” she said. “It also celebrates his lifelong contribution to environmental sustainability and recognizes the strategic significance of Jacksonville University’s Marine Science Research Institute in this region. This honor motivates the JU community to be further committed to environmental stewardship.”

During his educational and research career, White has delved into a wide variety of issues, including near-shore reef environments; oyster, dolphin, shark and kingfish research; water resource and pollution studies; ecosystems and climate change; and the Gulf Coast oil spill impact.

He serves as an expert resource to community groups, government agencies, elementary school children and college students; helps shepherd the annual St. Johns River Report; reaches tens of thousands of community members with his monthly “River Life” column in The Florida Times-Union; consults with the City of Jacksonville Waterways Commission on water quality issues; and was a key drafter of the city’s Manatee Protection Plan. White has raised hundreds of thousands of dollars for marine science research, and has brought biology and science into the hearts and minds of thousands of young people with annual youth events.

St. Johns Riverkeeper Lisa Rinaman, who has known and been mentored by White for more than a decade, said one of his great skills is in making complicated marine life issues understandable.

“He’s so clear and so passionate about the St. Johns River, and it flows through him and his family,” she said. “What he’s done in putting all the pieces together at the Marine Science Research Institute will serve future generations to come, helping us value and understand the river.”

Indeed the MSRI may be his greatest achievement yet. As the region’s premiere coastal marine research facility, it is housed in a $10 million, LEED Gold-certified, 32,000-square-foot building on JU’s riverfront campus. It includes a state-of-the-art floating classroom, and also is home to the St. Johns Riverkeeper, Florida Fish and Wildlife Conservation Commission offices and the Millar Wilson Laboratory for Chemical Research.

“A lot of hard work goes into these efforts, and sometimes things just line up. I had the right people at right place at the right time on this,” said White. “In looking at the MSRI, our new dock and research vessel and our marine science undergraduate and graduate degrees, I’m very grateful for the support from so many to make it all happen. The way it’s functioning has greatly exceeded my expectations. It really embodies a spirit of collaboration and synergy.”

White is “Mr. Marine Science for Northeast Florida,” said JU biology Prof. Lee Ann Clements, chair of the University’s Division of Science and Mathematics, who has known him more than 30 years.

“He has an enthusiasm for making connections, and for helping others in the community understand the river’s value, and that makes him a fabulous spokesperson and advocate,” she said. “At JU he’s created a lasting, tangible legacy with the MSRI, the Larkin floating classroom and our marine science academic programs.”

White’s even-temperedness and measured approach to getting things done has helped him remain effective while others working on marine life issues may have come and gone, added JU marine science Prof. Jeremy Stalker.

“I don’t know anyone else who knows more about the natural systems of the river, and he can talk about it without going over people’s heads,” he said. “He’s not anti-development, but he wants us all to give these issues the forethought they deserve, so that we don’t create more messes that we can’t clean up.”

For White, there won’t be much time to sit back and enjoy the fruits of his labors. There are always new programs to create, more relationships to nurture and additional funds to help raise.

Foremost on his mind will always be how the issue of growth affects the region’s waterways.

“As we get more and more people, more roads and paved areas, and fewer wetlands, that has an impact on the river. It happens in such small steps that you don’t notice it until you look back over a 35-year career and see what’s happened. And it’s a little scary, frankly. We don’t seem to be able to learn from our mistakes. Look at the Everglades. Decisions were made years ago that people thought were correct, and now we’re spending billions to fix those mistakes.”

One thing is certain: However he approaches any sensitive topic, it will be with a sturdy diplomacy that gets attention and turns heads.

“I was brought up with the idea of moderation. I feel blessed that I can see gray, and seldom in black and white,” he said. “I’ve managed to make both sides mad at me at times — which usually means I did OK.”