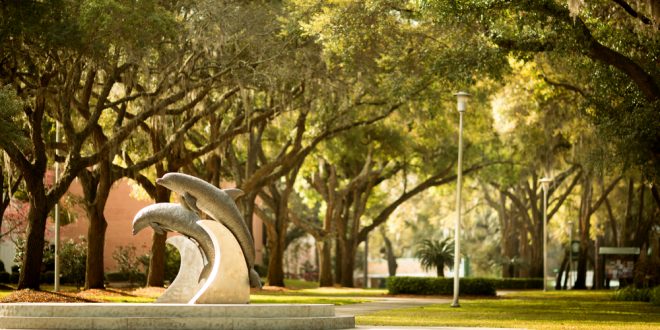 Raised expectations are raising the game of JU

The lawns keep getting greener and fuller. The dolphin statues are iconic. Corporate partners are paying for upgrades to academic and athletic programs. There are new residence halls, and new funding for key programs in the health sciences, marine sciences, business and more. An enticing riverfront is becoming the center of activities.  The school is engaged in its surrounding Arlington community and committed to helping improve it.

President Tim Cost had big goals when he took the reins a little more than three years ago, and in many ways the University’s stellar progress is a result of those raised expectations.

So says Florida Trend in a new article out in its most recent edition. Here’s an excerpt below:

When Tim Cost became president of Jacksonville University in 2013, he began asking questions that seemed obvious. Why were there so many bare patches on campus lawns where grass should have been growing? Why was there no representation of a dolphin — the school’s mascot — in any prominent place? Why didn’t more JU facilities and programs take advantage of the school’s striking riverfront location?

Cost, 57, is a JU grad — he was a pitcher on the school’s baseball team — who had gone on to a corporate career that included top executive positions at Wyeth, Aramark and Pepsi. He was serving on JU’s board when it asked him to become president.

Along with asking the right questions, Cost has other skills a leader needs to raise an organization’s expectations of itself. A sense of urgency, for example. And the ability to develop resources to spend on improvements — while enlisting stakeholders who may have shrugged at the previous state of affairs…

… Cost and JU may be emblematic of trends in Jacksonville more generally these days. The city, often inclined to shrug at obvious shortcomings rather than address them, appears to be serious about raising its expectations of itself.

Used with permission by Florida Trend.