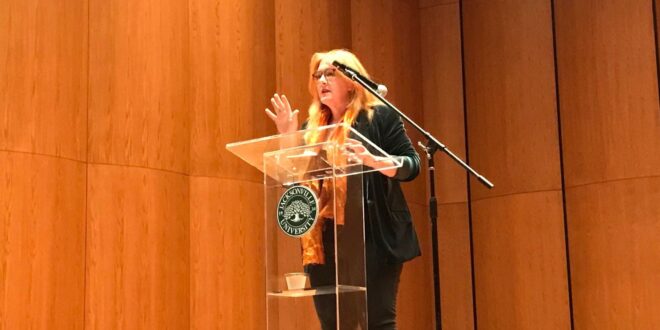 The 2022 Walter Visiting Writer Erin Belieu treated an audience of students and faculty to an evening of laughter, contemplation, and joy as she read selections of her published poetry, took questions and signed books.

Each year the Department of Literature, Language and Culture invites an internationally-renowned author to visit campus to discuss their writing and sources of inspiration.

The author of five poetry books and the co-founder of Vida: Women in the Literary Arts, Belieu’s work focuses on gender, love and history. She’s currently a professor of English at the University of Houston. Her visit was part of Linda Berry Stein College of Fine Arts’ 2021-2022 Creative Arts Series and 60th Anniversary season.

She entered the stage of Terry Concert Hall on March 22 to generous applause before proceeding to crack ice-breaking jokes and begin her reading.

Belieu told many other anecdotes as she continued to read seven more poems, including “When at a Certain Party in NYC,” “In Airports,” and “The Body is a Big Sagacity.”

While many of Belieu’s poems induced laughter, others produced a hush over the audience as they listened intently to the thought-provoking stanzas.

A former competitive diver, Belieu offered perspectives on how society views women as their bodies age in her poem “She Returns to the Water.” It’s about a middle-aged woman who swims naked under the moonlight and learns to love her body for how it is.

“You know, middle-aged women’s bodies are so hidden, covered up,” Belieu remarked. “Everybody wears basically like a tunic that goes down to their ankles as if we all have to disappear after the age of 30 or something.”

After reading her final poem, the event transitioned to a question-and-answer session. Here are some of her answers from the discussion:

Belieu said she started writing at a very young age.

She gets through writer’s block by pushing against it and continuing to write. Her poems undergo many revisions before she is happy with them, and that she finds inspiration while riding in public transportation and driving her car.

Belieu said she feels her most memorable poem is “Plainsong,” which she read for the audience after searching for it on the Internet (for she had forgotten to bring her book that contained it).

When asked “In a nutshell, what is poetry?” she answered:

“Poetry is the history of our inner lives…What I love about poems more than anything is it’s the most functional time machine that we have at this point…I can hear about the inner life consciousness of people that we wouldn’t have access to, and all the things they’re thinking about in the world that they’re looking at, the places that they lived. It’s the record of humankind’s inner life. I think that’s such a beautiful thing.”

After the audience dispersed from the auditorium, Belieu sat outside Terry Concert Hall to conduct a book signing.