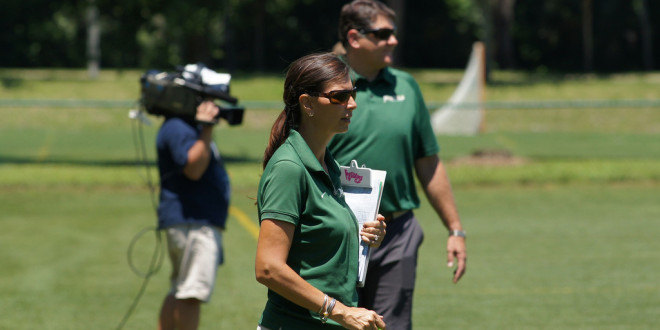 The foundation for future success in women’s lacrosse at Jacksonville University took a firm hold this week as Head Coach Mindy McCord signed a new five-year contract, extending through July 2019.

“I am thrilled to continue the good work that our players, alumni and coaches have put in over the first five years for the next five,” said McCord who has a 64-32 overall record at JU.  “The vision for Jacksonville University is in line with our women’s lacrosse program and when great energy and passion come together amazing growth is possible.”

McCord, a 24-year coaching veteran, has guided the program since its inception for the 2010 season. Under her direction the program has been nothing short of extraordinary.

The Dolphins have captured conference championships in each of the past four seasons including back-to-back Atlantic Sun regular season and tournament titles in 2013 and 2014.

“It’s great to be meeting with families and students knowing that you can tell future players that you will be at JU for a long time to come,” said McCord whose team has made consecutive NCAA tournament appearances. “It reflects the faith the school has in us and the desire that we have to go even further than we have in the first five seasons.”

The 2013 A-Sun Coach of the Year, McCord has spearheaded the nation’s highest scoring offense for four straight seasons, including an NCAA Division 1 record 18.16 goals per game in 2012. The success on the field has transformed into the classroom as well. In 2013 the program posted a 3.47 GPA, ranking them second in the nation. During the spring of 2014, the 34-person squad achieved an overall team GPA of 3.38.

“JU is a unique place for a Division I student-athlete,” added McCord. “We have several nursing and pre-med majors who will graduate at the top of their class. We have had students receive awards for graduating at the top of the business school class. Our women’s lacrosse players set a high standard not only on this campus, but nationally. They are tough on the field and even tougher in the classroom.”

“President (Tim) Cost and Athletic Director Dr. (Donnie) Horner are visionary, entrepreneurial leaders and they know how to build strong businesses and craft a campus. With the help of the board of trustees and state and local leaders, they are steering Jacksonville University and the department of athletics into an era of prosperity. We are beyond grateful to be a part of this breakthrough time.”

For more on the JU Dolphins, visit judolphins.com.