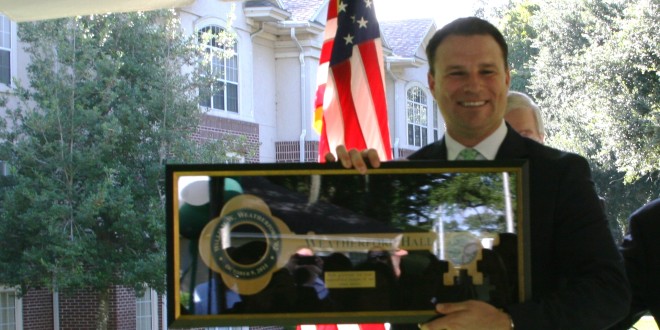 Hundreds of friends and dignitaries looked on Friday, Oct. 9, as JU dedicated one of its residence halls to an alumnus whose support of JU has vastly enhanced the educational experience for his alma mater’s students, now and for decades to come.

Will Weatherford, a 2002 graduate and 2015 Distinguished Alumni, was honored during Homecoming & Family Weekendf 2015 with the naming of Weatherford Hall at the Village Apartments, in recognition of his achievements and his contributions to Jacksonville University.

“We are proud to call the honorable Will Weatherford one of our own,” President Tim Cost said as Weatherford received a commemorative Weatherford Hall Key. “We are honoring a gentleman who has done an extraordinary amount in his short time since he graduated from here.”

In just one legislative session, Weatherford’s insight and guidance in 2014 helped JU secure a $12 million public investment – the largest state funding in the University’s 81-year history – to help launch the University’s EPIC (Entrepreneurial, Policy, Innovation, and Commerce) initiative. It is designed to create educational programming to attract and retain highly qualified graduates in the highest-demand fields of STEM, the health sciences, business analytics and sustainability — those that bring more jobs and businesses to Florida. The new program is helping establish JU as a recognized leader in trans-disciplinary education.

“This is a visionary leader who we honor here today,” Cost told the audience, which among numerous civic and public figures included Weatherford’s father, William, wife, Courtney, daughters Ella Kate, Molly and Madelyn, and son Winston. “He’s helped us lead a dramatic increase in the investment we’ve made in students, and in a new way.”

Weatherford said he was humbled by the honor, and proud to be a Dolphin.

“What JU is doing and the trajectory that it’s on … is an inspiration. And to have any building named after me, you could have named a parking lot after me Tim Cost, and I would have been honored, because I believe in this institution, and I believe it’s changing people’s lives. We are honored deeply as a family to be a part of it.”