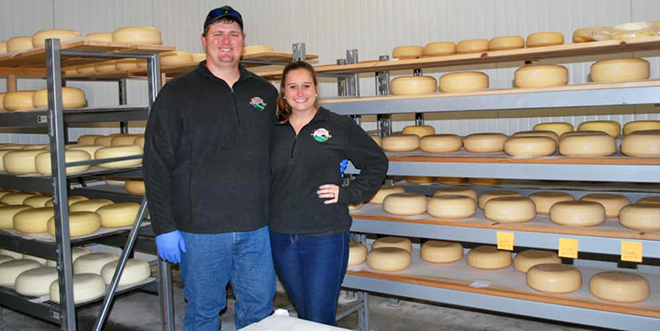 When two college sweethearts decide to rebrand a family cheese plant and diversify the market, the result is a whole lot of cheddar made with a whole lot of love.

Kevin Lussier, Class of 2016, and wife, Shelby Lussier, Class of 2017, attended the Davis College of Business. They met at Jacksonville University in 2014. After graduating, they took over the dairy farm that had been in Kevin Lussier’s family since the 1990s, as well as a cheese plant that once belonged to an older couple. From there, Hawthorne Creek Creamery was born.

Shelby Lussier thought establishing the creamery would bolster the sustainability of the business. “The dairy industry is always fluctuating with prices, and we saw the need to diversify and create an outlet that would let us sustain in this industry,” she said.

Once the Lussiers acquired the cheese plant, the rebranding began. New logos were created, and the business built a social media presence to get the ball rolling.

A day in the life of these two entrepreneurs is nothing short of an adventure. Kevin Lussier handles everything from cow care on the farming side to making cheese and handling orders on the dairy side. Shelby Lussier is in charge of all the marketing efforts.

Her double major in marketing and management from JU prepared her for her role at the creamery, but nothing could prepare her for the adventure of farming. “For me not coming from a farming background, this is all pretty exciting.” she said.

Jacksonville University builds students who are ready to approach the learning curves of the real world, no matter how steep. Kevin Lussier credits the success of the business to the education he and Shelby received at JU and to their joint efforts. “Coming back to the farm, I was really able to take what I learned at JU and really apply it to the business.” he said.

Of course, being an entrepreneur has its peaks and valleys. The Lussiers started their business in January 2020. A couple months later, just as their first batch of cheese finished aging and was ready for consumption, the pandemic hit. While Florida and the rest of the nation adjusted to a new normal, the Lussiers continued to produce and have since sold products to restaurants in the Walt Disney World area.

In the future, the Lussiers plan to grow their facility, further develop the products they currently have and increase their exposure in the dairy industry. When asked about their best practices, the two concluded that the best thing to do with a business journey is to start it.

“But before you start, make sure you do all of your research,” Kevin Lussier cautioned. “Do your market research and be prepared for curveballs.”

“Also, be sure to use all your resources. We were given a lot of great advice from our DCOB professors, and JU gave us a lot of free knowledge and tools to start this business,” Shelby Lussier added.

When they first started, the Lussiers were armed with their passion, a business plan and some financial assistance from the full-time job Shelby Lussier holds outside of the farm. So far, the couple has seen everything from curds to curveballs, but Kevin Lussier remains optimistic, citing lack of exposure as the only problem they have.

“We’re working to get our name out there right now,” he said. “I think our biggest problem is that no one knows we’re there.”