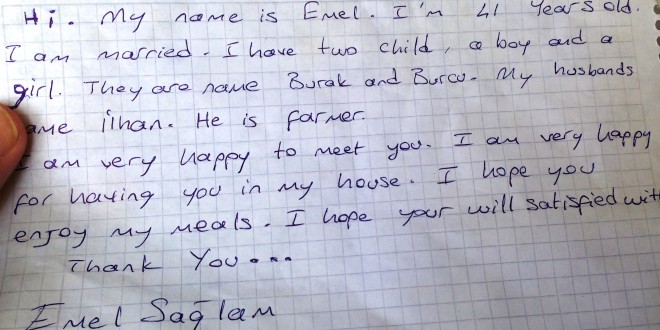 A note offered to JU's Dennis Stouse by host Emel Sağlam to get acquainted before their lunch in a tiny village near Izmir, Turkey.

May 12, 2015 Academics, All Sections, Arts and Culture, Current Affairs, Student and Campus Life

There are many joys that come with traveling.

Of course we have the treasured photos and videos we share on social media, or, for those of us who still have our pictures printed the old-fashioned way, pasted into scrapbooks or made into slide shows. (Does anyone still use slide projectors and a screen? There must be some boomer travelers who still use this 1960s technology.)

We bring home souvenirs of our travels and display them in our homes — artifacts of our experiences. Perhaps we collect ephemera: tickets, maps, guidebooks, brochures and one of my favorites, newspapers and magazines, from the cities I visit.

For me, one of the greatest joys from traveling is collecting people. During my more than 40 years of travel, I have met many people who have enriched my experience and generously offered me kindness, friendship, acceptance and understanding. These chance meetings — I call them the “unexpected encounters” — provided me with rich insight into their lives and their culture.

The first occurred in the summer of 1978 when my friend Pete and I were wandering around Europe. We were two young college professors traveling on a very tight budget, following Arthur Frommer’s groundbreaking travel book “Europe on $20 a Day.”

We were in Paris on the Left Bank in one of those charming bistros where you are seated tightly together, with the next party barely inches from you. A Parisian sitting to my right with two women noticed our guidebook on the table and asked me in careful English if it were true. Can one really get by in Europe on $20 day, he inquired.

That question started a conversation that continued for an hour in my inadequate college French, my friend’s Spanish and the Parisian’s basic English. It turns out our new acquaintance, Yves, was a gifted photographer. His wife, Jeanne, and her sister Marie operated a tiny boutique nearby that sold hand-knitted sweaters.

We all got along so well that Yves invited us to their home in a Paris suburb that evening. Marie prepared a memorable dinner of fish, fresh vegetables, salad and a pear tart. Yves showed us his photographs. We watched a speech by President Jimmy Carter on French television and discussed American politics and international relations. How we accomplished that without having a fluent common language is beyond me now, but we enjoyed ourselves thoroughly. Later Yves drove us back to our very modest hotel, showing us the splendid lights of a glittering Paris.

For decades, in the years before email, Facebook and Twitter, we kept up with Yves and his family through postcards, letters and Christmas cards. Yves and his family dispelled the image that Parisians were rude and hostile to Americans. They were absolutely charming people whom I still remember fondly today nearly four decades later.

My second “unexpected encounter” occurred on a recent visit to Turkey. It also involved a meal. My travel companion, Therese, and I were with a small group that included other educators who had the opportunity to have lunch with a family in a small village near Izmir.

We were the guests of Emel and her husband, I’Ihan. Although Emel and her husband spoke only limited English and our Turkish did not go much beyond “hello,” “goodbye,” “thank you,” “please,” “yes” and “no,” we had a delightful meal and conversation. Gestures and photos on smartphones do wonders for intercultural communication.

We learned that I’Ihan is a farmer and grew the food we enjoyed. The couple has two adult children, one of whom wrote in English an introduction Emel gave to us to read to the group. Our experience in Turkey was enriched by the opportunity to spend time with this generous family in their home.

My third encounter was this March in Zagreb, Croatia. My companion, John, and I met Ivan, a bartender at our hotel. We made casual chitchat for a while, enjoying a local Zagrebian brew when our conversation turned to the war between Serbia and Croatia.

Ivan opened up about his experiences as a 9-year-old living near Dubrovnik when the fighting broke out. His house was bombed, his neighbors were killed and his father was missing in action for months. Ivan and his family lived in refugee camps for years.

A history buff, Ivan explained the agonizing breakup of Yugoslavia, bringing to life the reasons behind the wars and the terrible destruction and loss of life that ensued. He helped me see the wars in Serbia, Croatia, Bosnia and Kosovo through the eyes of a child who grew into adolescence amid the confusion and uncertainty of being a displaced person, and now a thoughtful adult who had spent years reflecting on his experience.

I will be forever grateful to Ivan for spending time with two Americans and being so open about his experiences. This was truly an “unexpected encounter” that will have lasting effect on me.

Traveling to me is about getting out of my comfort zone. It is about visiting unfamiliar places with different cultures but finding common ground. My “unexpected encounters” with people are memories that will last after the photos fade and the social media posts are long forgotten. Seek out the unexpected in your journeys.